In a Vase on Monday: Do you prefer pastel or bold colors?

Dahlia 'Sellwood Glory' didn't quite make it to the gate in time to be featured on "In a Vase on Monday," the popular meme hosted by Cathy of Rambling in the Garden but I'll be surprised if it doesn't bloom within the next few days.
Meanwhile, 'Mr Optimist' is sprinting, followed closely by 'Enchantress', 'Labyrinth' and 'Loverboy'.  The rest of my dahlias currently seem content to produce more and more leaves but I'm reasonably sure they'll come through eventually.  The first of Zinnias I pinched back are finally budding up too, a self-seeded Amaranthus has made an unexpected appearance, and more than half a dozen Gladiolas have bloom spikes so things are looking up in my cutting garden.  However, this week I once again made do with what my larger garden had to offer.
My first vase was inspired by the light pink Scabiosa in the front garden.

The second vase is comprised of more foliage than flowers but includes stems of some of the Leucadendrons with bracts that mimic flowers.

To find more IAVOM posts, check in with Cathy at Rambling in the Garden. 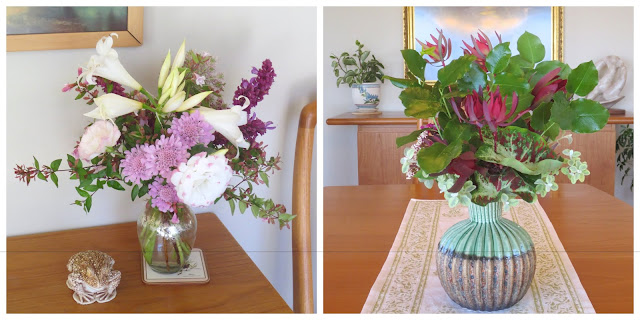