In a Vase on Monday: The new arrivals

Two of my long-awaited dahlias finally bloomed last week.  Although the supply of dahlias available for cutting is still very small, there was no question about what I'd use in my vases this week.  The only issue was what I had available to pair with them.

'Sellwood Glory' (which always sounds to me like it should be the name of a thoroughbred race horse) beat out 'Mr Optimist' by less than a day.  Finding a companion for 'Mr Optimist' was easier as my first gladiolas arrived on its heels.

Last week's vases held up well.  I tossed the contents of last week's first vase on Sunday but the second vase consisting primarily of foliage looks almost as fresh as it did last Sunday so it moved to the kitchen island. 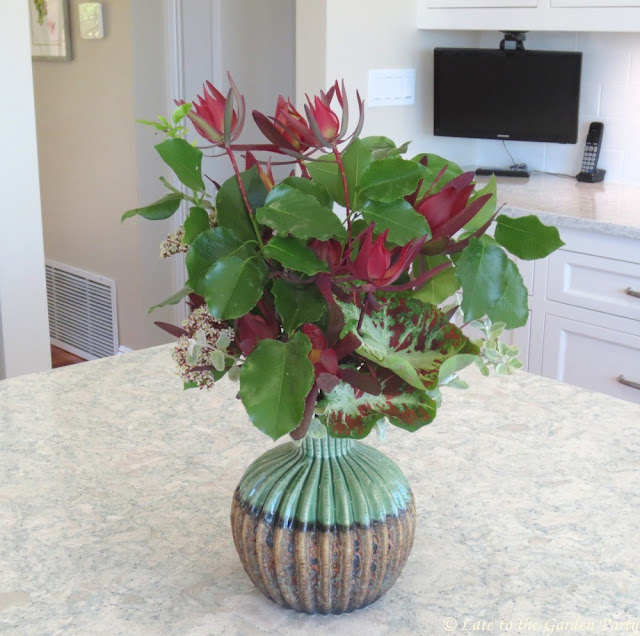 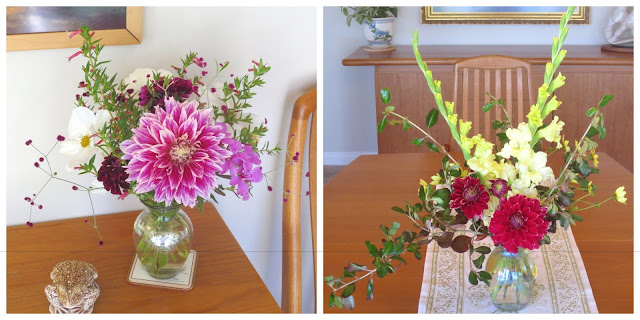 Six more dahlias have buds, including a second 'Mr Optimist'.  Seven other dahlias sprouted and continue to grow but have yet to produce buds.  Yesterday afternoon, I noticed that one of the purple gladiolas was blooming and that a few of my seed-grown zinnias have produced flowers.  While things in my cutting garden are looking up, I'd say it's still running a month or more behind last year's garden.  Cooler summer conditions may be a factor but most of the delay lays squarely on my shoulders.  I planted most of my dahlia tubers between late April and early May this year instead of early March.  I sowed zinnia seeds even later, and I've pinched back both the developing dahlias and zinnias on a more routine basis than I've done in the past.  Hopefully, I've just pushed my peak flower season forward rather than reducing its duration but we'll see.

To see more vases created from materials contributors have on hand in their own gardens, visit Cathy in Rambling in the Garden.