One of the projects I committed myself to tackle this month was/is to reduce the mass of Centaurea 'Silver Feather' planted in front of my mimosa tree (Albizia julibrissin).  With a heatwave in the near-term forecast, I decided to get started late Monday afternoon.  It was tougher than I'd thought as the base of the plants were hard to uncover under all the shrubs' heavy branches.

I've paused the project as my green bins are almost full and I need the gardeners to trim that Xylosma hedge behind the tree, which is completely out of control.

Another small project I had on my plate was to replant the Epiphyllum in my lath house, which had grown too large for that space.  I'd planned to move it into a hanging basket but when I checked the lath house yesterday, I found this:

So I've paused that project too, at least until the plant blooms.

Viewing the moderate slope outside my lath house, it occurred to me that I need to do something about a very visible bare spot.

Adding more Agaves seemed a reasonable solution but, rather than buy a large specimen, I decided to use one or more of the bulbils from the Agaves that bloomed in 2019.  I'd saved only those with the best variegation.  They're still pretty small but I repotted three of them to allow them to beef up a bit further before I plant out all or some this winter. 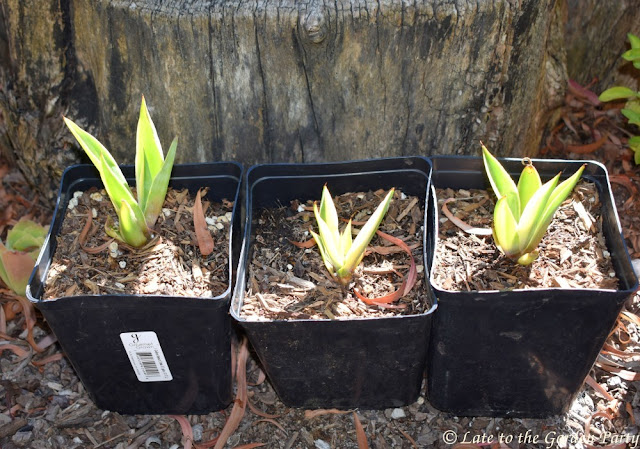 So that's another project that's almost there...And speaking of that, I noticed that my blogger stats show that I'm just shy of one million views this morning.  As I started the blog at the end of December 2012, I expect a million views isn't all that remarkable but it was/is an informal target I'd set when considering whether or not to continue this blog.  It feels weird to be so close to that target this morning.  I've no immediate plans to shut the blog down but it's probably time to give its future some thought.  I've been posting on Instagram (at krispeterson591) for a couple of years now but I haven't yet entirely embraced that forum as a blog substitute.   Deliberations will continue...