In a Vase on Monday: Nothing to spit at

My Osteospermums  are doing especially well this year so I decided to make one variety the focus of this week's vase.  After cutting a couple of stems, I realized that they were covered in a sticky foam, the tell-tale evidence of the presence of a spittlebug.  I hosed them off and used them anyway.  I'm not sure how common spittlebugs are but you can see them in action here.


I put together a second vase this week specifically as a personal challenge, using Salvia africana lutea as my inspiration.  I've never had any idea what to combine with its flowers, which have an unusual shape and color.  It's been in my garden for 3 years now and, while it's far from reaching its mature size, this year it's produced numerous flowers.

I surprised myself (again) by finding more than enough flowers and foliage to accent the Salvia.


It's probably entirely a coincidence but Pipig showed up as soon as I put the vase down on a side table in the living room.


I'm still feeling a bit guilty about cutting the Leucospermum bloom for this vase but the flowers have a long vase-life so I expect I'll be able to enjoy it for awhile.

For more Monday vases, visit our IAVOM guru, Cathy at Rambling in the Garden. 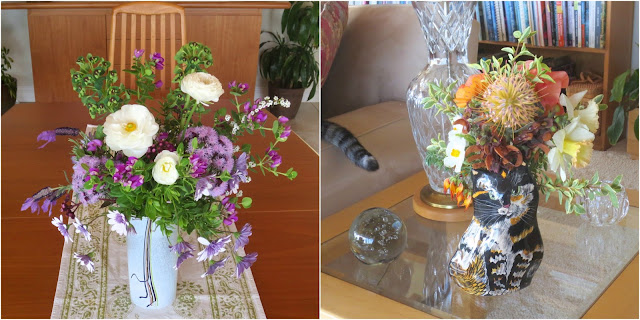