In a Vase on Monday: Late Arrivals

This week I was able to cut both foxgloves and sweet peas for my Monday vases.  My impression was that both flowers are late in blooming this year but, after a bit of sleuthing through my records, the reality is less clear cut.  The foxgloves were blooming by mid-March last year but this year the first flowers have only just appeared.  Although the blooms were even later in 2017, I believe this was because I planted my plugs late, as I gradually converted my vegetable and herb garden into a real cutting garden.  A colder winter and cooler-than-usual Spring could be responsible for the delayed blooms this year but, as I also relied almost entirely on rain to water the raised planters until the middle of this month, the beds may also have received less water than they wanted.  Last year, when we received so little rain, I irrigated the beds regularly.


I've planted sweet peas from seed for at least 3 years now and my records indicate that, while this year's blooms are almost a month behind the 2017 crop, they're just a couple of weeks behind the 2018 crop.  However, in prior years, I've also added a couple of specialty nursery-grown seedlings to my planters in late winter, which I didn't do this year so it may be that my own seed-grown plants are right on target.


Last week's arrangements held up well.  While I tossed out the contents of one, I held on to a simplified version of the arrangement featuring the "pinwheel" flowers.

The new arrangements found their spots. 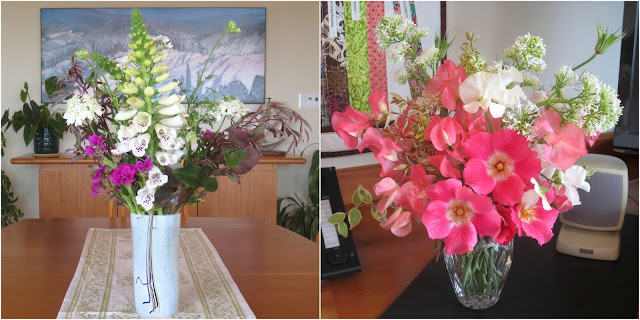 For other IAVOM posts, visit Cathy at Rambling in the Garden.