Tell the Truth Thursday (Late Edition): Lipstick on a pig

This post poses the question: Can an ugly truth hide behind a pretty exterior?  My garden contains plenty of support for the contention that it certainly can.  My north side garden is looking pretty in pink at the moment.

The area on the left lining the path that leads down the back slope is dominated by four pink-flowered plants at the moment.

I've allowed the Jupiter's beard, pink evening primrose, and hairy Canary clover to spread indiscriminately.  The first two plants have already crept down the back slope, laying claim to a significant area. 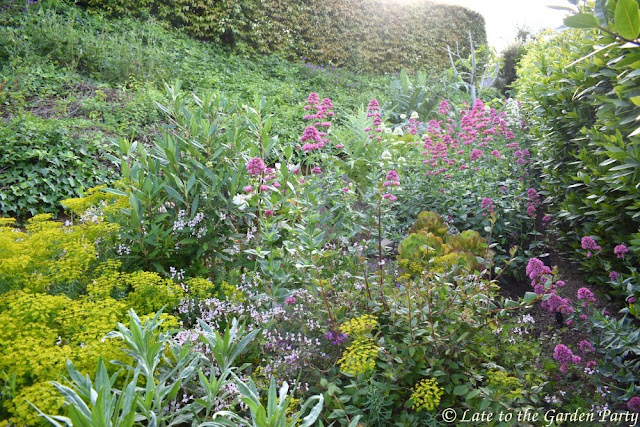 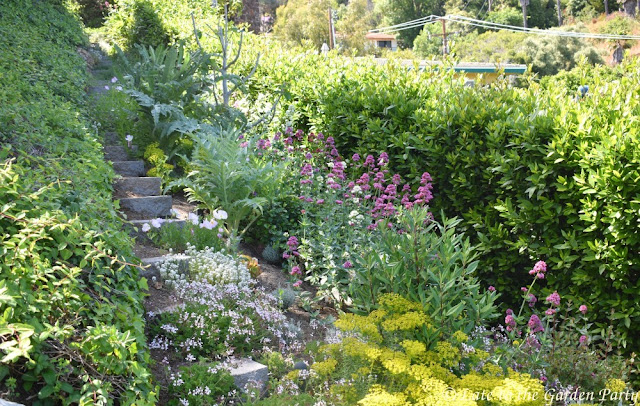 Both the plants are completely out of control, although I suppose the same could be said for the Pelargonium 'White Lady' and the chartreuse Euphorbia's 'Dean's Hybrid'.

For a couple of months, the back slope looks pretty.   The camera sees the frothy flowers and almost entirely misses the mass of weeds blanketing the portions of the upper slope that aren't covered in the dead ivy and honeysuckle vines left behind by last summer's horrific heatwave.

I've pulled the weeds I can reach from where I stand on the concrete stairs but I can't reach the large majority of them.  I'm seriously considering investing in knee-pads to see if I can crawl a bit higher to reach at least some of these but I've no illusions I can clear all of them without hiring sherpas.

Meanwhile, in the front garden, I've let a prettier weed take over an area that I could clean up without fear of breaking my neck.

I thought I could control the clover but it's advance is relentless.  Thus far, I've rationalized my inaction based on the argument that clover fixes nitrogen in the soil; it prevents the raccoons from digging in areas it occupies; the bees like it; and it has pretty flowers.  In light of those considerations is it so bad that it makes it difficult for me or anyone else to walk through the front garden?  When our remodel starts, I expect it'll get trampled anyway...

Tell the Truth Tuesday is the brainchild of Alison at Bonny Lassie.  Visit her here to discover the ugly truths other gardeners are hiding.

Posted by Kris Peterson at 9:38 PM