A very good friend and I were finally able to take an often-discussed and long-awaited trip north to nursery shop in Carpinteria and Calabasas this weekend.  I took my shopping list but I wasn't able to find either the Coreopsis 'Big Bang Redshift' or the Uncinia uncinata 'Rubra' I've been hunting for.  Despite my recent resolve to exercise some discipline and stick more closely to my planting plan, I'm afraid I went off the rails with impulse purchases.  Can you visit 4 plant sellers and buy nothing?  I've never had that kind of will-power.

The trouble with impulse purchases, at least in my own case, is that I often have only the vaguest of notion as to where I'm going to put them.  I placed Grevillea alpina x rosmarinifolia on my cart at Sperling Nursery in Calabasas and then considered where I could plant it.


Based on the limited information provided on the grower's label, my initial plan was to put it in my dry garden as a foil for Phormium tenax 'Yellow Wave' and P. 'Tiny Tiger.'  This would work but I wasn't as happy with the placement as I expected to be.  I'd also have to clear out some plants to make room for it.


I considered the new bed that formerly held the snorkel spa.  A touch of yellow would shake up the collection of plants there.  The Grevillea also would get more sun there than it would next to the Phormium in the dry garden.  However, if/when the Driyms lanceolata (mountain pepper) in the middle of that bed reaches 10 feet tall and wide, the Grevillea, with an estimated height of 4-5 feet at maturity, would be hidden.  The Driyms appears to be a slow grower but the size differentials are a concern nonetheless.


I hadn't initially thought of putting it into my new extended backyard border but I do have a couple of holes in my plan I hadn't yet identified plants to fill.  The south end of the bed is among the sunniest in my garden.  I think the Grevillea nicely complements the new Leucadendron 'Rising Sun,' Justicia brandegeeana and Phormium 'Amazing Red' already in place there and the height differences don't pose a conflict in this location.   Kismet!

No, the Grevillea wasn't my only purchase.  Here are some of the others:


And my friend gave me a special pot, planted with succulents, in remembrance. 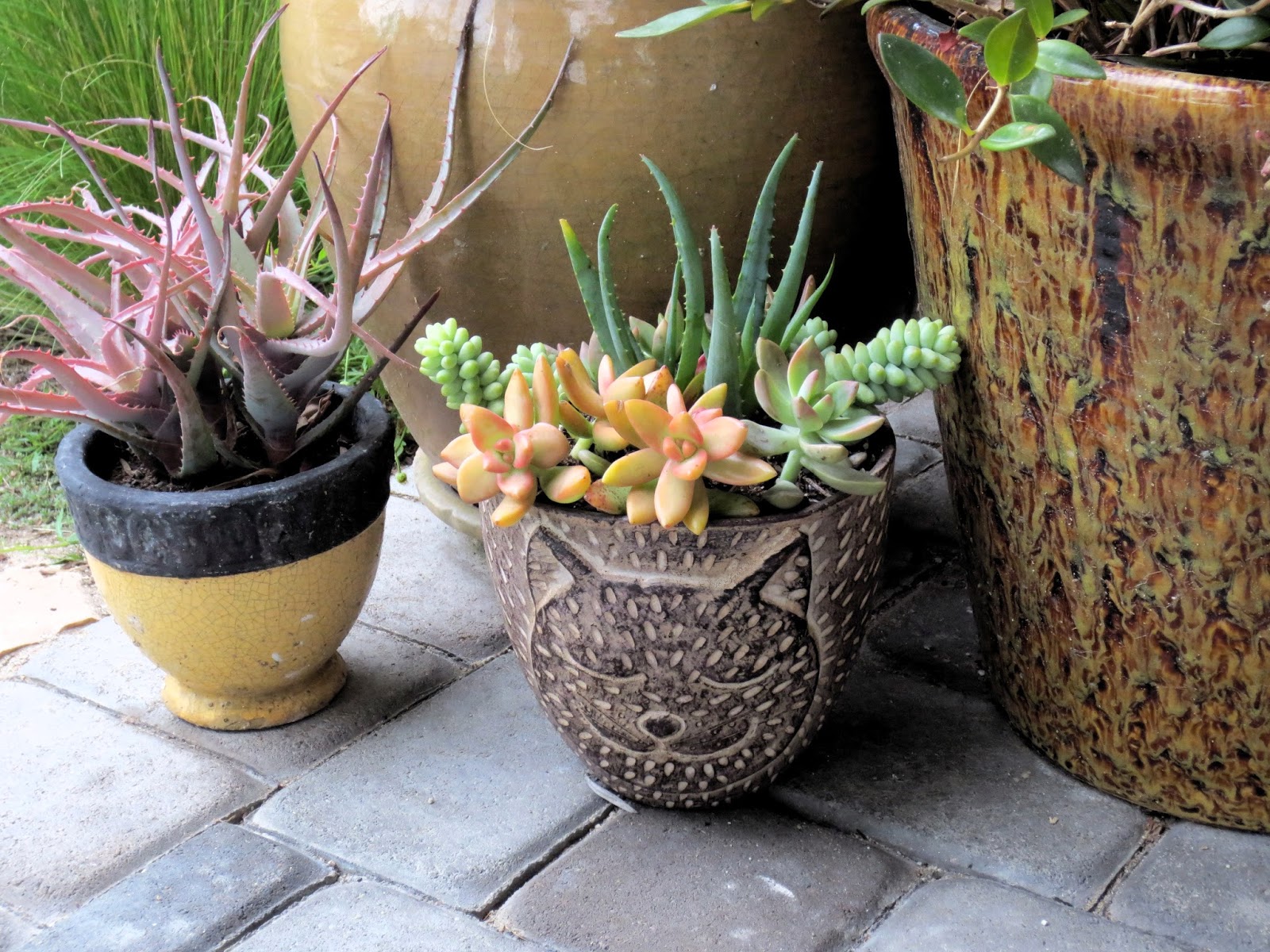 So, are impulse purchases a valuable creative tool to shake up your garden plan, or do they more commonly interfere with your designs?  For me, I'd say it's 50/50.

Posted by Kris Peterson at 9:19 AM