Good looking inside and out

I've been whining off and on for the last few weeks about the state of my garden.  Even my old garden, situated in an area with a strong marine influence, suffered during the mid-to-late summer months and the heat is 10 degrees higher on average at our current location.  Although we had a few weeks of cooler than normal summer temperatures this year, it still gets hot.  Many of the roses produced new blooms only to wither within a day.

Still, there's an area of my garden that's looking especially good right now, at least by comparison to the rest.  It's the area along our living room window, which looks out onto the backyard and, in the distance, the Los Angeles harbor.  That bed is long and skinny, about 3 feet wide and 23 feet long, which makes it difficult to photograph.

Here are photos taken from the backyard facing the bed, by segment, starting on the right side.

My side view photos may show it better. 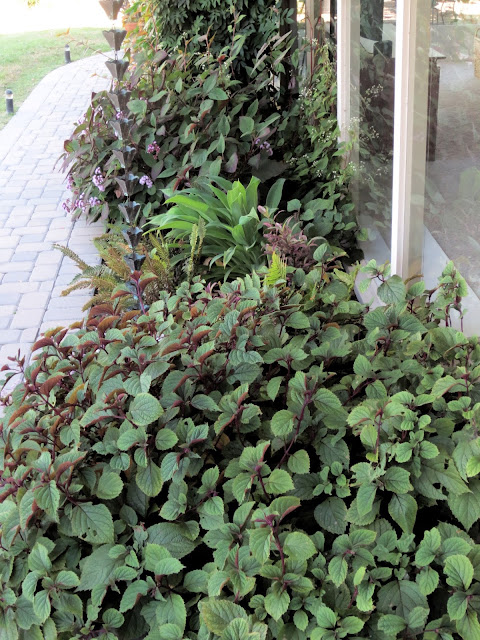 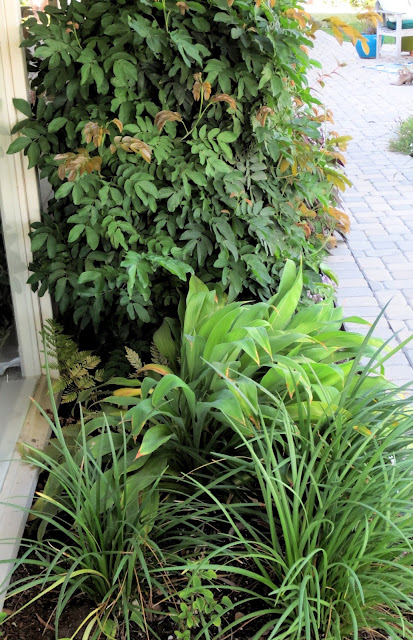 I took a couple of photos from inside the house too but their clarity is somewhat obscured due to the fact that I haven't tackled window washing in a few months. 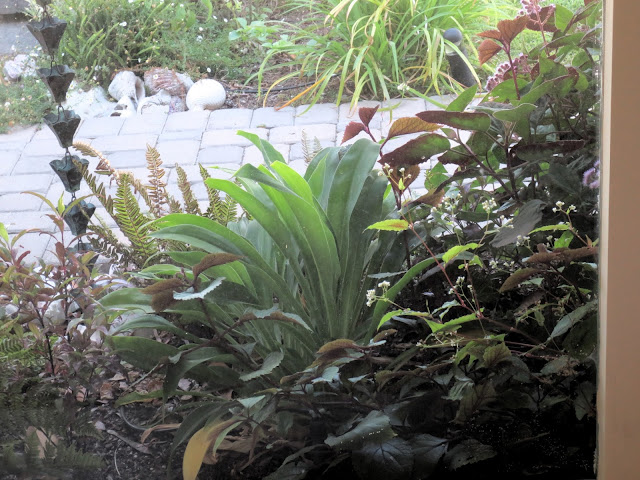 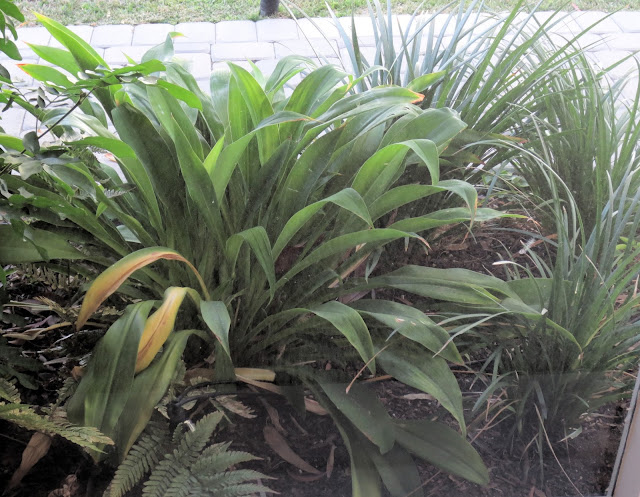 This bed relies heavily on foliage; however, several of the plants do flower.  The Plectranthus ciliatus (variety unknown) came here as a cutting.  It has grown very large in 2 years.  The leaves are textured and purplish burgundy underneath.  The plant produces delicate lavender flower sprays in the fall.

There are 2 Arthropodium cirratum in the bed, placed on opposite ends.  This plant, commonly known as Renga Lily, also blooms, although I grow it mainly for its foliage.


Next to the Renga Lily on the right side are 3 Eupatorium sordidum (formerly known as Ageratum corymbosa), which have knitted together.  This plant has velvety green leaves with purplish edges and veins.  It flowers heavily in spring but it's producing a lighter crop of ageratum-like flowers now.

Persicaria microcephala 'Red Dragon', also grown from a cutting, sits behind the Eupatorium.

The middle of the bed is dominated by a 4+ foot tall Calliandra haematocephala (aka Pink Powder Puff).  This is the only plant left of those originally in this bed.  It's an unusual choice in the middle of a span of windows but the prior owners positioned their TV in front of the space and we have followed suit as it's the most logical placement to ensure that the main seating is positioned to face the view.  If money weren't an issue, I'd love to have a TV that raised up out of a hidden cabinet but that's not going to happen so we rely on shrubbery to make the TV's placement more presentable from the exterior.

This Calliandra doesn't get enough sun to bloom but the reddish color of the new foliage provides sufficient interest. 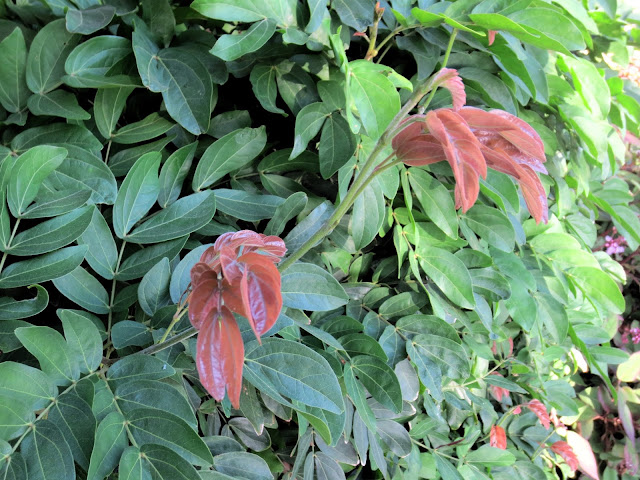 On the left side of the Calliandra, there's another Renga Lily, 3 Liriope muscari, and a Plectranthus zuluensis.  This spring-flowering Plectranthus hasn't done as well here as it did in my old garden, where it grew to more than 3 feet tall and wide.  It may simply need more time to mature but I think the drip irrigation system in this area also needs work as the space has been the hardest to keep full.

All in all, it's a nice bed.  I add pansies and other seasonal bedding plants that can manage with only morning sun to fill in but the plants featured above carry the show.  And, it looks good both from the garden and from inside the house.

Posted by Kris Peterson at 3:36 PM