This is my 100th post.  When I started this blog at the end of December 2012, I wasn't sure if I'd keep it up.  My husband was late getting home from work, it was raining, and I just started fiddling around with Google's blog application.  And here I am 100 posts later.

I'm more than a little fed up with my own garden at the moment.  While there are a few things that look really good, like the foliage plants I wrote about here, a good part of my garden is looking sad at this point, despite the relatively cool weather we've been experiencing this summer.  Therefore, I decided to take myself off to the nearest botanic garden, the South Coast Botanic Garden (SCBG), to collect material for this post.  My husband accompanied me, which is a good/bad thing as his patience for plants and photo-taking has its limits.  We had business to attend to in the morning so we also got a bit of a late start but, as it was socked in at our place, I figured that conditions would still be good for taking photos at the garden a few miles away.

Unfortunately, I was wrong on this count.  About a mile from home, the skies were clear and the sun was shining bright.  As a result, my photos of our excursion aren't particularly good.

When we arrived at the SCBG, I took the opportunity to buy a membership, something I've been planning to do for the past 2 years.  My husband was impressed to learn that membership earns us access to 29 other California gardens under the American Horticultural Society Reciprocal Admission Program.  Personally, I was impressed to find that I'll get preview access to the garden's annual plant sales and discounts at a few local nurseries.  The Fall Plant Sale is scheduled for September 14th so I don't even have to wait long to take advantage of my new benefits.

I've toured SCBG several times, dating back years.  It doesn't approach the caliber of the LA Arboretum, Descanso Gardens, or the Huntington Garden but it has aspirations.  Created on the site of a sanitary landfill in the 1960s, SCBG adopted a "Vision Plan" in June of this year with the intent of transforming it into a "world class garden."  A friend once suggested that the garden could bring in a lot more money if it installed a zip line on the premises but that doesn't appear to be part of the new master plan.  (Sorry MS!)  The plan has a 25-year timetable so we'll need to be patient about changes.  More immediately, I expect I can learn more about what will grow and thrive in my area by visiting there more regularly.

In August, I'm afraid that much of the garden looks as bedraggled as my own, despite the efforts of staff and 150+ volunteers; however, it does cover 87 acres so upkeep isn't a simple matter.  The garden is divided into several different areas, including areas specializing in cactus, fuchsias, edible plants, Mediterranean plants, roses, waterwise plants, and dahlias.  There's also a Japanese garden, a children's garden, a "Garden of the Senses," and a lake area.  Tech-friendly signs were available to guide the visitor. 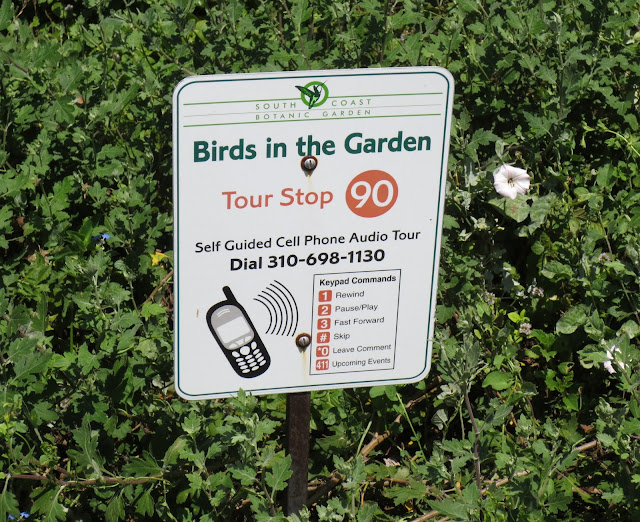 We toured the Japanese Garden first: 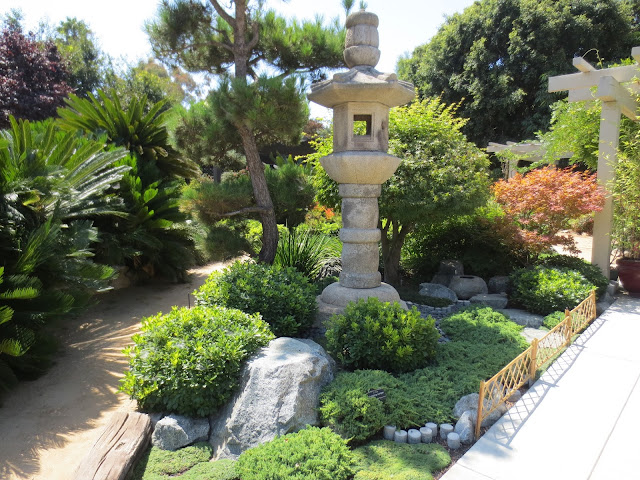 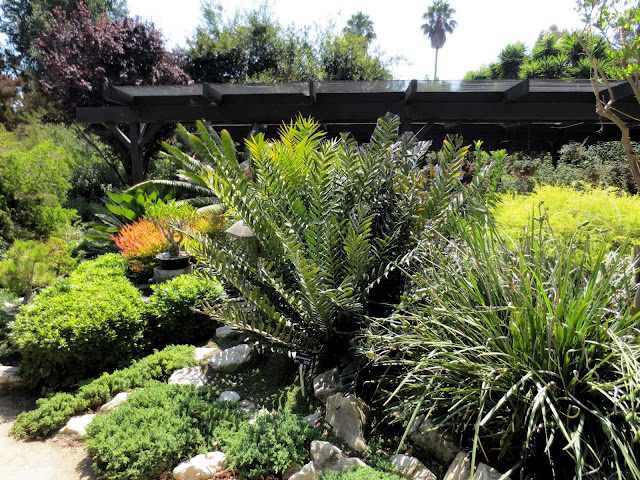 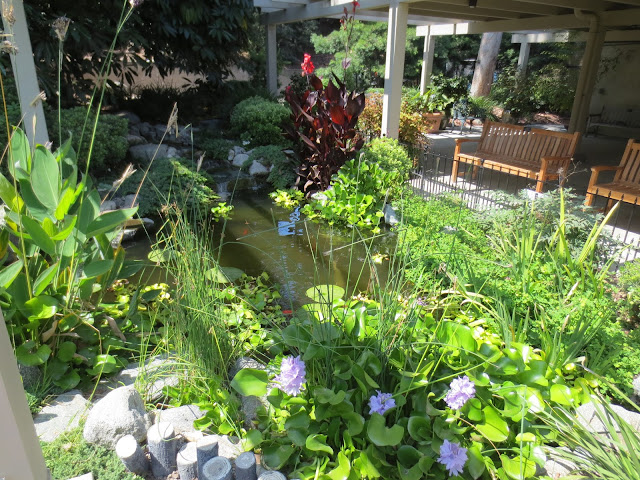 Then the fuchsia collection: 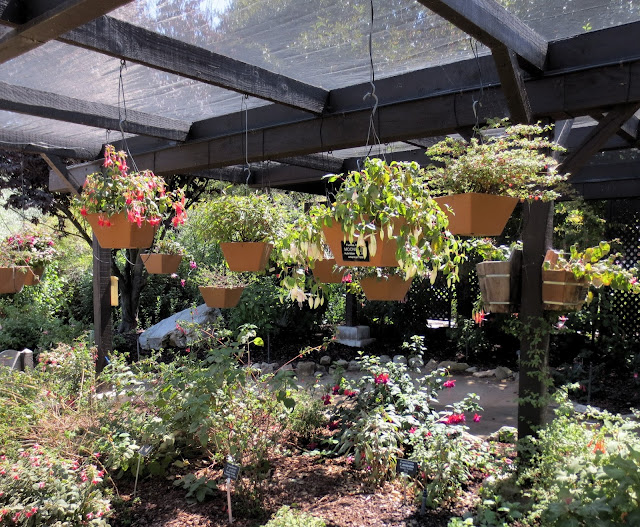 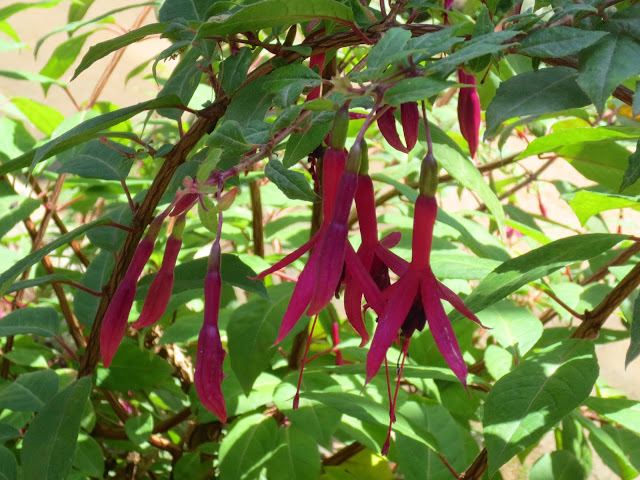 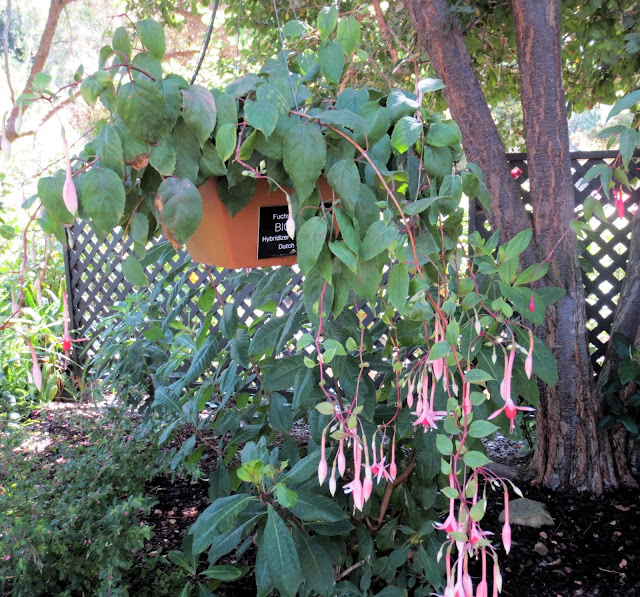 We passed an area dedicated to the garden's volunteer staff: 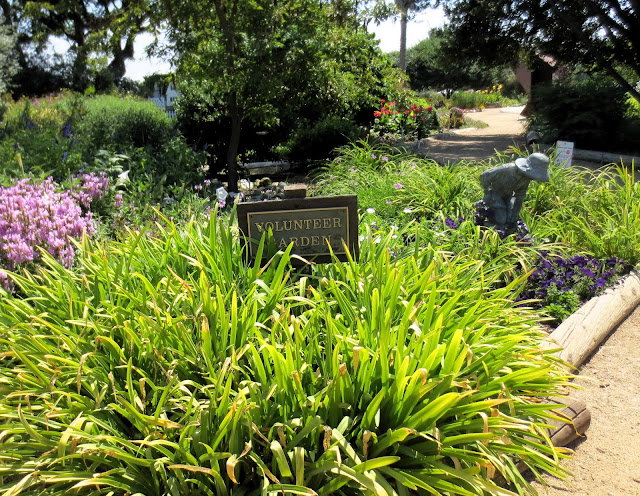 I zipped into the small dahlia garden while my husband moved along on his own: 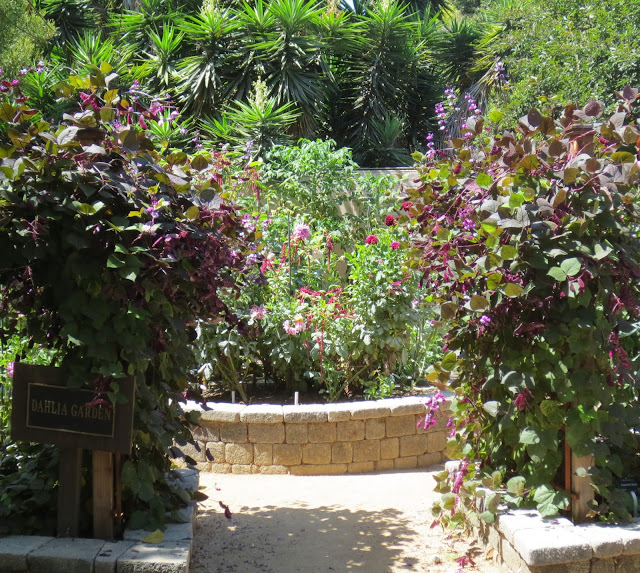 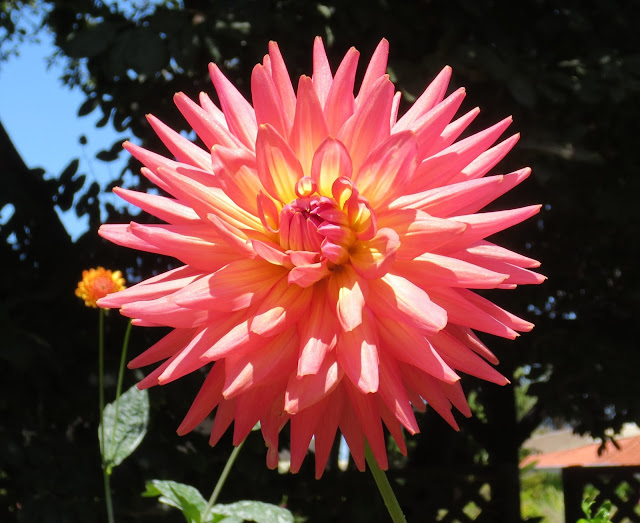 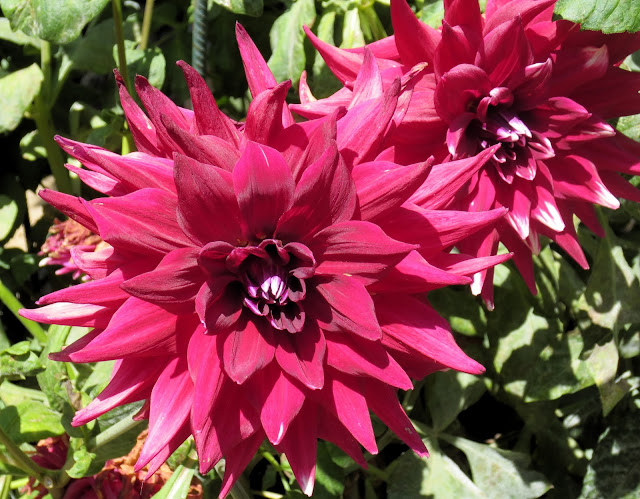 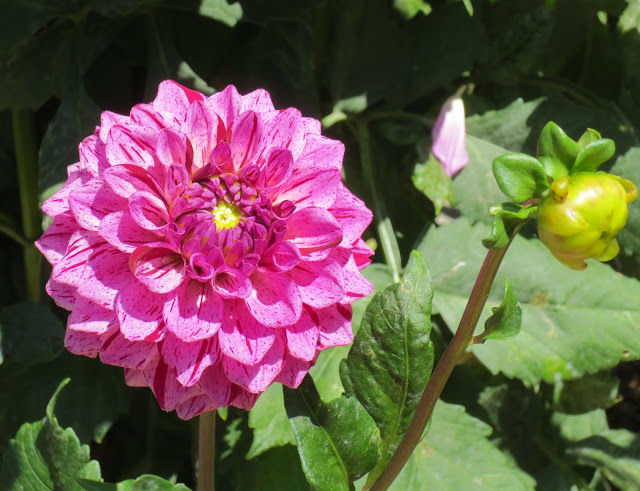 Most of the dahlia foliage was marked by mildew, which made me feel less awful about the condition of my own dahlias.  We've had a lot of foggy mornings this year so maybe there's hope that next year I'll be able to grow dahlias that look better than the ones I produced this year.

The vegetable garden had some healthy tomatoes and grapes that hadn't been consumed by birds like mine (despite the fact they weren't covered by nets), as well as some developing pumpkins. 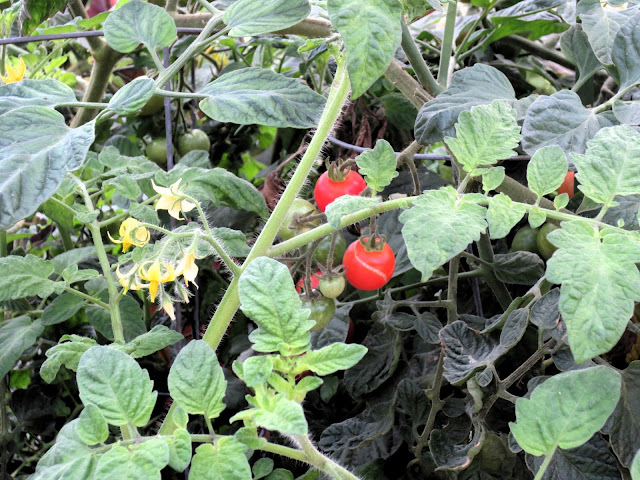 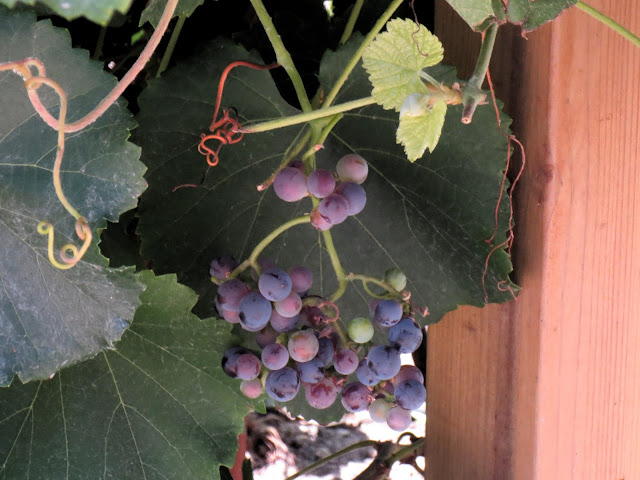 We passed through the Garden for the Senses, which consisted mainly of dead herbs.  The lavender, although considerably past its peak, was still nice. 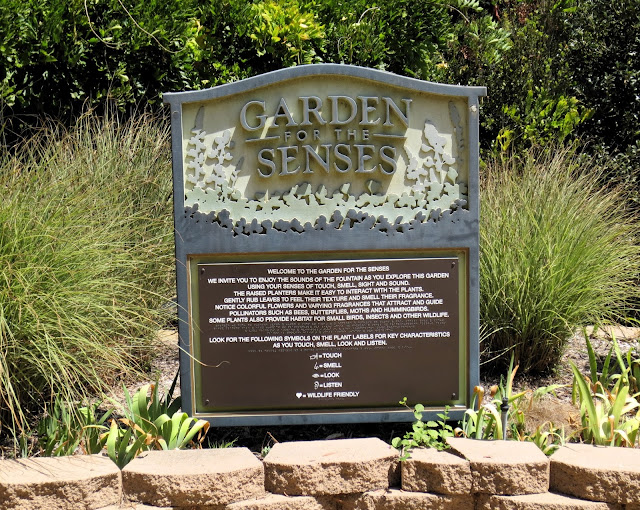 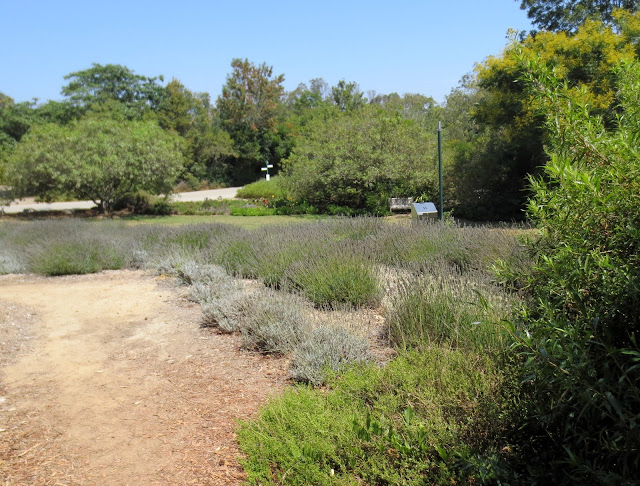 We briefly toured the rose garden, which I understand is a hot spot for weddings.

From the rose garden, we headed to the "lake," which is now more of a marsh.  Apparently, a crack appeared in the lining of this man-made creation following an earthquake in 1971 and the problems created there were further complicated by mud flows following various El Nino rain events.  As a result, the lake is filled with mud and the water is only a few inches deep.  Tules and papyrus have taken over the margins but ducks and other birds, as well as insects and crawdads, still inhabit the area.


On the way back toward the entrance, we passed through the cactus and succulent garden. 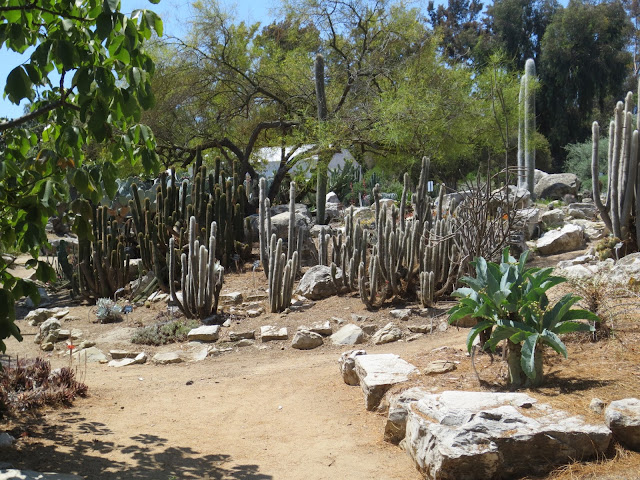 I snapped a few pictures of the Children's Garden on the way out: 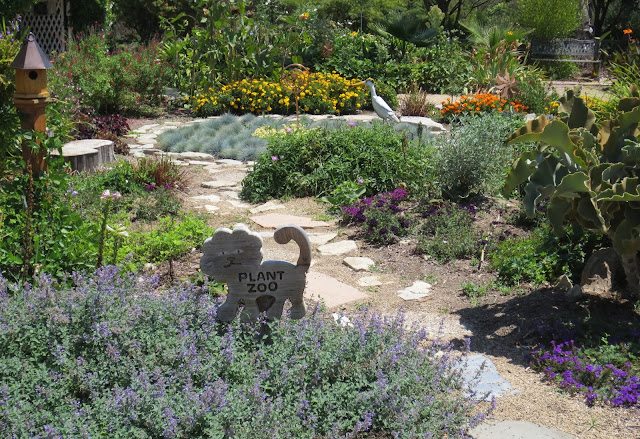 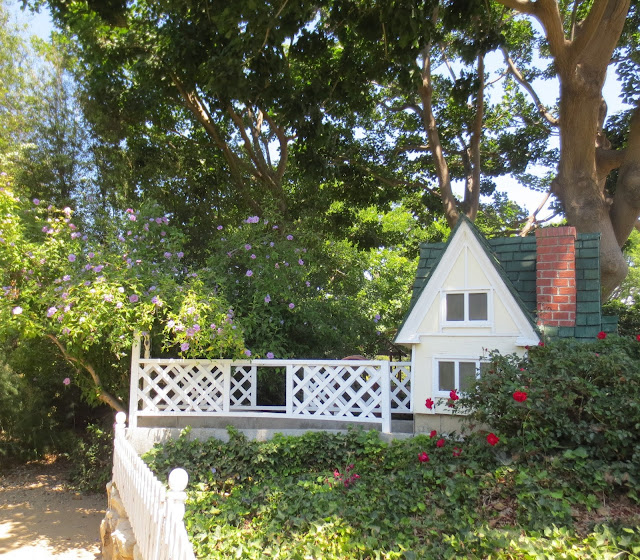 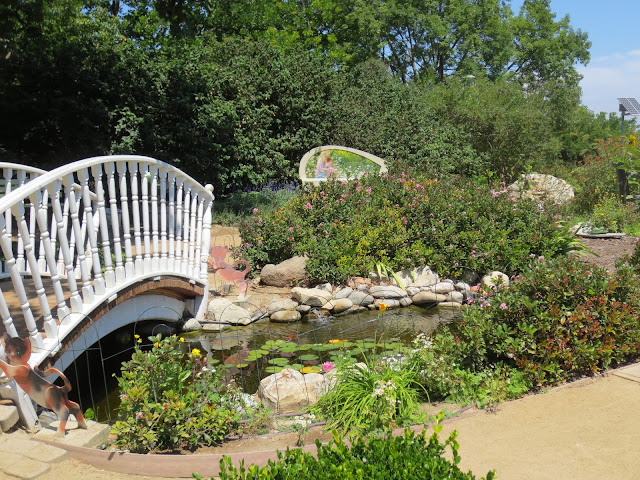 Overall, my favorite plants at the SCBG were the trees and tree-like shrubs, even though few were flowering at this time of year:


And there were lots and lots of mimosa trees, reinforcing my belief that, left to their own devices, they'd take over this section of the planet.