As I've said in prior posts, I prefer to construct bouquets of flowers that are in ample supply - I don't like to cut flowers if doing so leaves holes in my garden.  Right now, there's a lot of Coreopsis 'Big Bang Redshift' in the backyard so it was the logical choice for inclusion in this week's bouquet.  This flower hasn't put its best face forward in my garden either, as I explained here.

I've noticed that these flowers are in the process of going through the "redshift" that gives them their name.    When temperatures are high, the flowers open in a butter yellow color with deep burgundy centers.  However, as the weather cools, the red tones start to dominate.  Our local temperatures are running lower than normal for this time of year, leading some forecasters to say it feels more like June than August, and Coreopsis 'Big Bang Redshift' is adjusting its coloration accordingly.  The photos below, although poor in quality, show the change.


I picked up the red/burgundy color of the Coreopsis by adding cuttings of the following plants to my bouquet:

Here's the completed bouquet, offered as this week's contribution to the Garden Appreciation Society even hosted by Erin on her The Impatient Gardener blog: 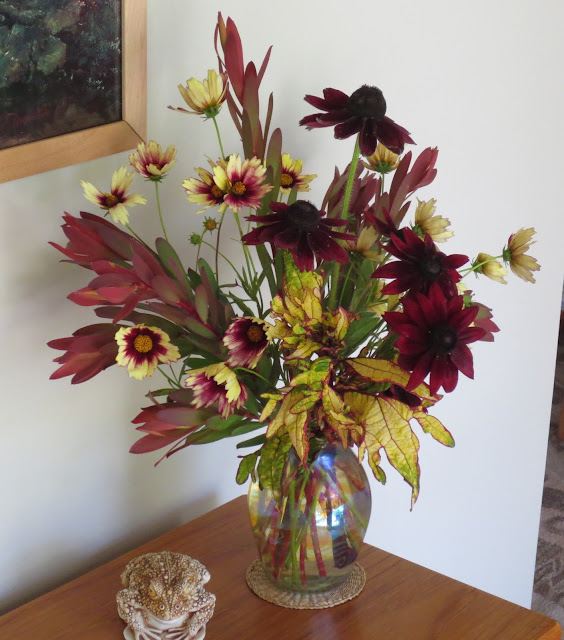 I wasn't sure about inclusion of the coleus.  I haven't decided if I like this plant or not.  A friend, seeing it in the garden, asked me what was wrong with it.  With very irregularly shaped leaves in varied mixes of yellow, green and red, I admit that it can look a little scruffy.  However, in close-up, I think it's rather interesting. 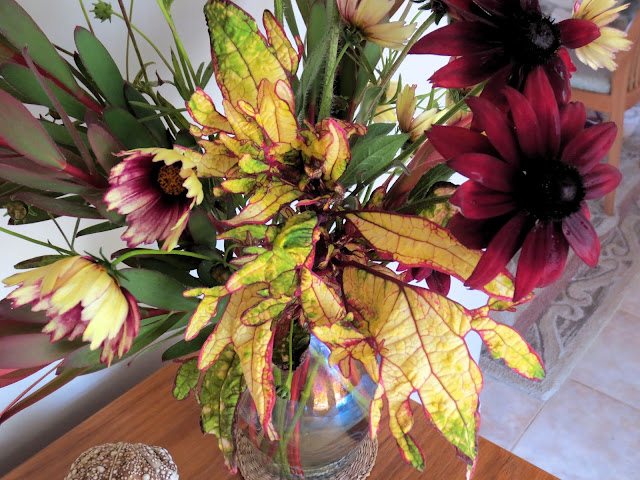 The stems and leaf edges of the Leucadendron pick up the red in the other plants.  I brought this Leucadendron with me from our old house, where I had it in a large pot.  Now that it's in the ground, it's growing like gangbusters.  I originally thought it might be L. discolor 'Pom Pom' but, after seeing pictures of that plant, I don't think that's correct.  I now think it might be 'Wilson's Wonder', not that you can tell that from just the stems.  When the cones develop, it looks more yellow than red/orange as it does this time of year.


Any guesses as to the Leucadendron's name?

Posted by Kris Peterson at 3:04 PM