In a Vase in Monday: Spring Extravaganza

It's been spring in all but name here since early February but now it's official!  To make things even sweeter, Mother Nature provided us a touch of rain on the last day of astronomical winter, squeaking in with 0.13/inch (3.3mm) on Saturday night between 10pm and midnight.  Admittedly, that's not a lot but even that paltry amount was sufficient to fill my 50-gallon rain tank.  My larger tanks are no longer entirely empty either.  A few weeks ago when rain was expected to arrive in the wee hours of the morning (but never materialized), I said I wasn't crazy enough to get up at 2am to supplement my rainwater collection by filling buckets from my rain chain; however, it seems I am crazy enough to put a raincoat over nightclothes to collect rainwater between 10pm and midnight.

I enjoyed collecting flowers in the fresh air on Sunday morning, thankfully completing that task before gusty winds returned.  My first arrangement made use of the last of the pale greenish-yellow Hippeastrum 'Luna' stems to bloom.

The huge blooms of Leucospermum 'Brandi' inspired my second arrangement.

I threw together a third small arrangement as the kitchen island "needed" fresh flowers to replace the leftovers I'd saved from vases prepared in prior weeks.

There's another small chance of rain next Monday but it's way to early to get excited about that prospect as most early projections tend to fade away.  In the meantime, daytime temperatures are expected to soar into the mid-80s (29C) here by Wednesday.  Hopefully, spring doesn't plan to prematurely give way to summer. 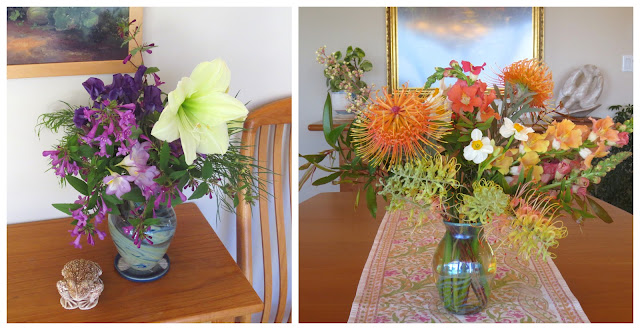