In a Vase on Monday: Springfire!

Once summer finally loosens its grip on us (which it was slow to do this year), the cooler temperatures deliver a spring-like rebirth to Southern California gardens.  As I was making my rounds of the garden on Saturday, I caught sight of an unexpected flash of coral color and literally gasped when I realized that the Metrosideros 'Springfire' I'd planted in February had blooms.

There are lots of unopened buds on the Metrosideros so I went ahead and cut 2 stems with flowers as the starting points for this week's first vase.  There was no problem finding companions for those flowers, although I admit I went more than a little matchy-matchy.


I didn't give much thought to my second vase at all, other than thinking it would be nice to use some of the lavender colored blooms in my garden.  After clipping a little of this and a little of that and dropping it all into the water-filled jar I carried with me, I was so disillusioned about my ability to turn the contents into something that I seriously considered dropping everything in the compost bin and starting all over with Camellias.  But, as I still feel contrite about every flower I remove from the garden, I couldn't bring myself to do that.


The vases found their places in the usual spots. 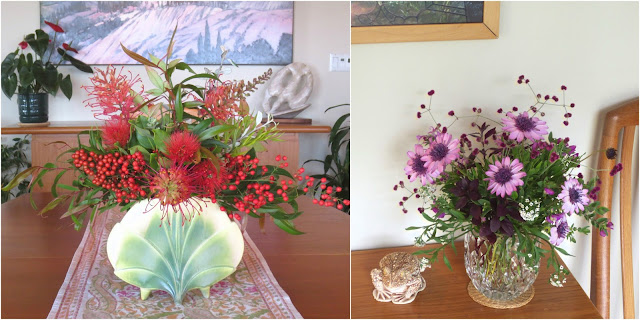 I retained one of last week's vases, albeit with some edits.

Visit Cathy, our "In a Vase on Monday" host at Rambling in the Garden, to find more vases.