In a Vase on Monday: Faux frost & a bit of bling

I've been struggling to get into the holiday spirit.  Since last Tuesday morning when I woke to news of wildfires, the situation in Southern California has been hellish.  If you've seen any news coverage of the devastation, you probably won't consider that an exaggeration.  For days, every morning brought news of yet another major fire.  In total, there were 6 major fires, stretching from Ventura County to San Diego County with 3 in Los Angeles County.  Only one has been fully contained thus far.  The worst, the Thomas Fire in Ventura County, was only 10% contained Sunday night and it's now headed for Santa Barbara County.  At their height, 200,000 people were evacuated in response to the fires.  Over 250,000 acres have burned thus far.  More than 800 homes and structures have been destroyed.  Miraculously, only one human life has been lost but scores of horses have been killed.  Yet, my family and friends have been lucky.  Even though my own area is considered to have a higher-than-average fire risk, there have been no outbreaks here.  Only our air quality was affected, although we're still on edge as red flag (fire danger) warnings remain in effect until Monday night.  We're used to Santa Ana winds and wildfires but I can't recall a sustained wind event like this one, nor as many fires burning across such a widespread area.  And I've lived in Southern California all my life.

I thought I'd be posting photos of a Christmas wreath today.  With humidity levels in the single digits, I've put off purchasing a wreath, garlands and a tree but, trying to work up some enthusiasm for the holidays, on Sunday I picked flowers that mimicked the frosty images I saw posted by bloggers in Texas and the Eastern US who found their gardens dusted with snow late last week.


While doing some Christmas shopping, I picked up a small inexpensive vase for myself to provide the house with some holiday bling.  I'd originally planned to use the mirrored glass vase with the blue and white flowers but decided it complemented my pink Camellias better.


I've started pulling out small (non-perishable) decorations here and there.  When the winds die down and humidity levels start to rise, I expect I'll jump into holiday preparations.  For now, I'm making do with my faux frost and a bit of silver bling. 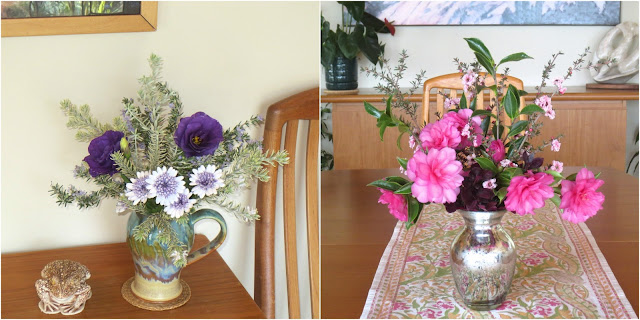 For more "In a Vase on Monday" posts, visit Cathy at Rambling in the Garden.