A lot of work but not much to show from it

During the long Thanksgiving holiday, after the worst of our freak heatwave had diminished, I tackled 2 projects I'd been dreading: leveling out a dip in the backyard pathway and tidying up the back slope.  Neither of these projects can be considered fun, although once done they did offer a sense of accomplishment.

It'd have been difficult to show you the dip in the backyard path even if I'd thought to take photographs before I got started.  The ground had sunk in one area of perhaps 10 feet in length and 3 feet in width.  Because water tended to pool in that area, the creeping thyme that surrounded the stepping stones grew exceptionally thick, creating a dense green mat.  Lovely but not particularly easy to traverse.  Unfortunately, raising the soil underneath the flagstone meant first removing all the thyme, which was a tedious task.


Fortunately, we had plenty of topsoil left from the batch we'd hauled in when I renovated the succulent bed in front of our garage.  There was still a pile left in our driveway, which my husband was more than happy to see gone so he helped out and did the heavy lifting removing the stones, adding soil, and then leveling and repositioning the stones. 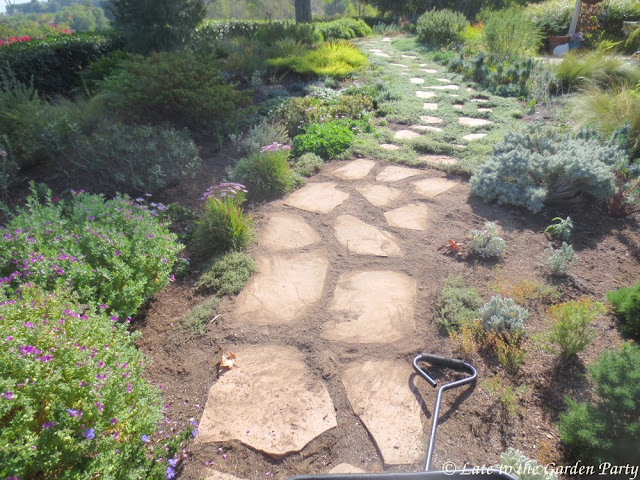 I picked things back up there, filling in with more soil and planting 2 flats of  thyme (Thymus serphyllum 'Elfin') around the repositioned stones and the area beyond the pathway dip where the thyme had died back.


One project generally leads to another and this one was no exception.  While pulling some of the dried out thyme, I got carried away and began cutting some of what was encroaching on the succulents planted along the east side of the patio.


My first pass at cleaning up the back slope took about 3 hours.  There's still more to do there - cutting back ivy encroaching on paths and pruning the Matilija poppy (Romneya coulteri) among other things - but I cut back the scraggly and sprawling plants and lightly pruned the shrubs and perennials on the lower level of the slope.

I also added amended topsoil to the lower planting bed and planted artichoke plugs.  Against all odds, the artichoke I planted there 3 or 4 years ago has come back each year.  Last year's crop of artichokes was especially good, perhaps due to our heavier-than-usual winter rains.  Dare I hope for the same this year?

While I haven't done anything at all with the upper portion of the slope (mainly because working in that area is too treacherous for me with one bad knee), at least the overall area looks a bit neater.  I'm still thinking of bringing in help next year to clean out the ivy and honeysuckle on the upper slope.  Terracing the area to support ornamental grasses or more succulents remains a dream.

The back slope usually peaks in late spring when the Centranthus, Ribes and Oenothera bloom.  However, the calla lilies there usually bloom in late winter and, even with our extended heat spells, they're already making an appearance.

Meanwhile, work on my long awaited lath (shade) house continues.  It's now spilling out of my husband's workshop and the garage into the driveway.  I'm so excited!

Have a great weekend, whether you're spending it in the garden or otherwise!