In a Vase on Monday: Zinnias steal the show

I'd planned to showcase one of my large-flowered Grevilleas, 'Ned Kelly', accenting it with Dahlia 'Terracotta', but the latter's blooms were looking shabby so I cut Zinnias instead.  As it turned out, the Zinnias stole the limelight.


As I've been spending lots of time in the garden on new projects, I'd intended to stop at just one vase this week but I couldn't bring myself to leave the front entry table unadorned.  I immediately thought of the Oncidium orchid I recently found blooming in a shady corner of my garden.  A brief stop at my local botanic garden's orchid show and sale on Saturday had finally provided me with a name for the cultivar, Oncidium 'Wildcat' (although an on-line search suggests a more complicated lineage).  I cut one stem and began hunting for suitable companions.


The color palette used for this week's vases, like our cooler weather, has a distinctly autumnal feel.  As fall officially arrives on Friday, perhaps that's appropriate. 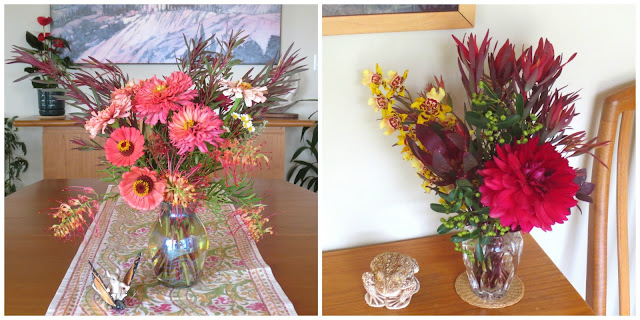 It'll be interesting to see if other "In a Vase on Monday" participants are also feeling the seasonal shift.  Visit our host, Cathy at Rambling in the Garden, to see.