Late last month, my husband and I took off on a weekday visit to the Getty Center in West Los Angeles.  We hadn't been there in 3 years, our last visit unexpectedly marking our last outing with his mother.  My mother-in-law was in great shape and we all thoroughly enjoyed ourselves during our April 2013 visit but her unexpected passing some five weeks later put a bittersweet aura over our most recent visit.  Still, I was interested in seeing what was happening in the Getty's Central Garden and we took time to stroll through two of the museum's current exhibits too.

The Getty Center is only 35 freeway miles from our home but Los Angeles deserves its #1 ranking as the city with the worst traffic in the US so it took us over an hour to get there, even traveling after the peak rush hour was over.  We arrived in late morning and, as the day was sunny and bright, my photos, with a few exceptions, are sun-drenched so I offer my apologies in advance.  (Warning: this is a photo-heavy post.)

Visitors enter the Central Garden through the stream garden, where a winding path directs their attention to the surrounding plants.

I feel at home with the plants in the Getty's garden, many of which can be found in my own garden, albeit not in the same numbers or sizes!

The stream garden opens up to a large, plaza-like area, highlighting two of the most well-known features of the Central Garden.


My favorite area is the one called the bowl garden.  It's not as densely planted in early spring as I recall it being on visits later in the year but there's still a lot to see.  We walked around the garden counter-clockwise.  Here are the photos from the 11 o'clock to the 5 o'clock position. 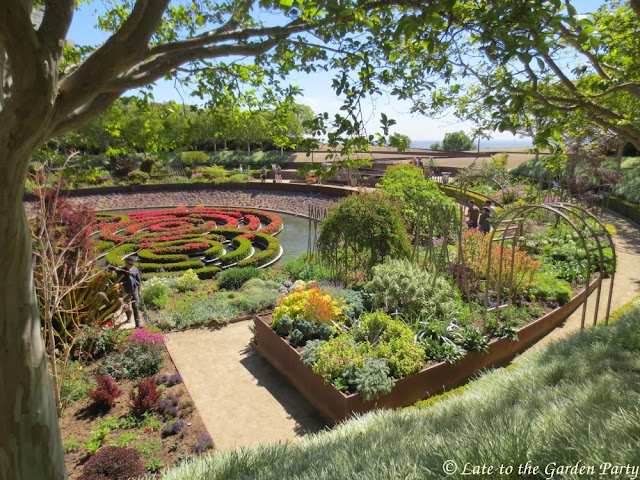 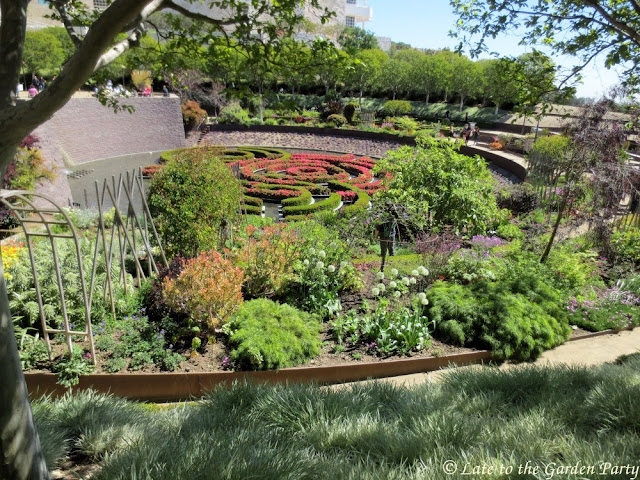 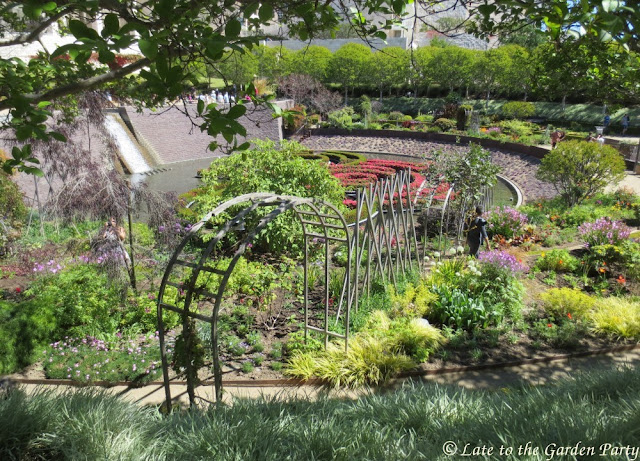 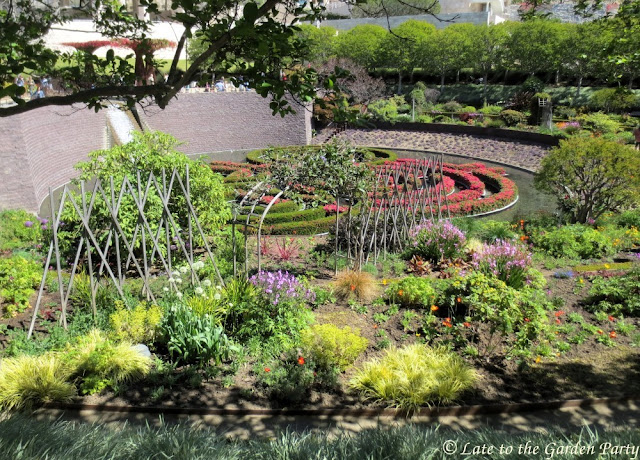 The other side of the bowl was harder to photograph because of the sun's position and visitor traffic but I got a couple of shots. 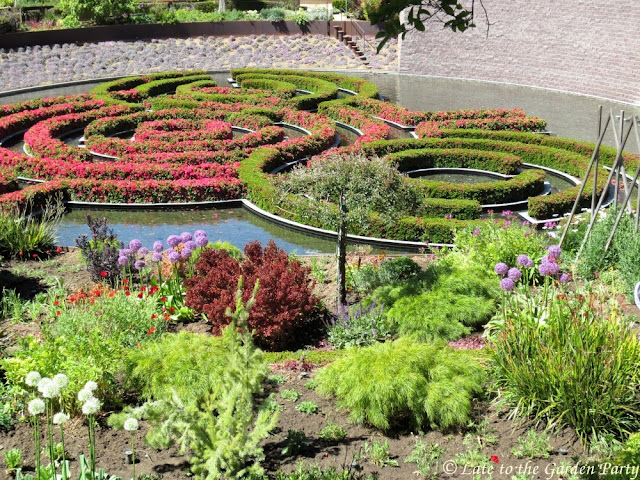 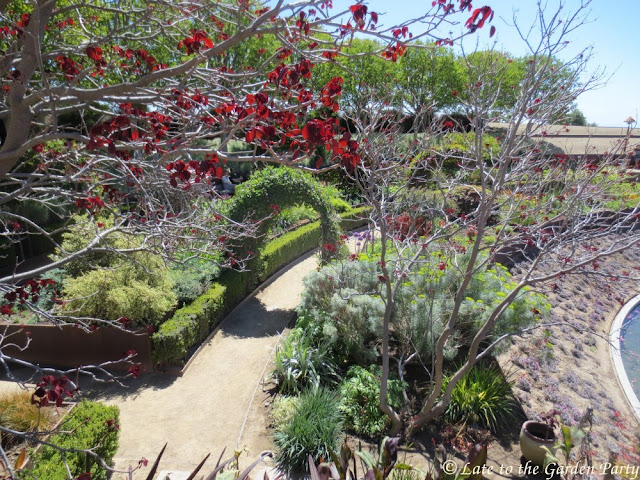 I also took some long-range shots from the bowl's 12 o'clock position.


Amazingly, I was able to identify many of the plants I saw in the bowl area, consulting Jim Duggan's book entitled Plants in the Getty's Central Garden in only a couple of cases for verification.


With the exception of the Azalea Pool, the Getty has made an effort to manage its water use in response to California's drought.  Water features outside the Central Garden have been turned off. 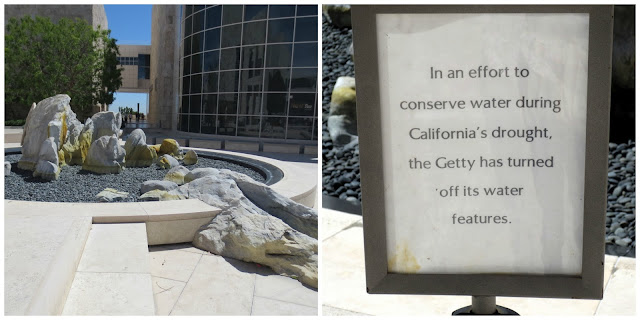 By and large, plant selections, including most of those shown above, were also made with attention to drought tolerance.   The cactus garden is another case in point.

I'd hope to get photos of the views of the area surrounding the Getty on our trips up and down the tram between the main grounds and the parking structure but we got stuck standing up in both directions.  The only distance views I got were these from the top level of the property.

The Getty's garden isn't the Huntington but it's worth a visit if you find yourself in West LA.  I'll end this post with a photo of the statue that greets visitors upon arrival. 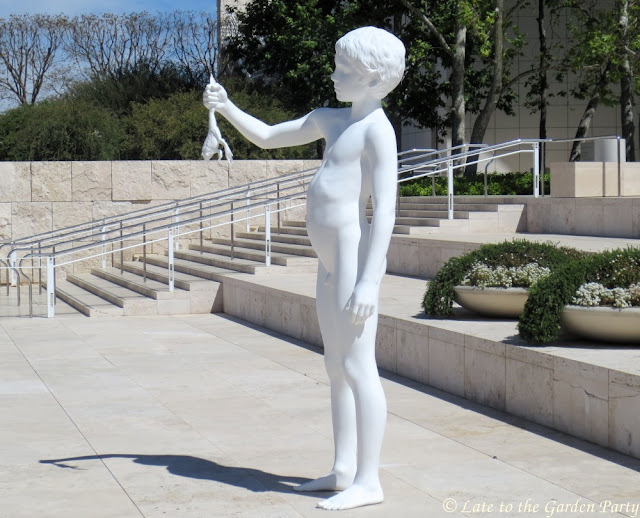