Another work in progress

In my recent wide shots post, I mentioned that I was working on the area on the southwest end of the property alongside the street.  This area is a mish-mash.  The strip directly adjacent to the street is half succulent bed and half hedge.  Behind that, there's a flat area and another area that slopes down from the main level of the front yard to a dry stacked wall.  I've been working on that slope.  It isn't as precipitous as the one at the back of our property but it still presents a challenge.

The decline of several sections of the Ceanothus hedge planted along that slope and their subsequent removal left large areas of bare ground.  This is the closest I have to a "before" photo of the area:


Here's what the area on the left looks like after planting:


I ordered a few plants from a native plant nursery but filled in with others that are more commonly available, including a couple that I consider "weeds" but which in this instance will at least help hold the soil while the other plants mature.

Watering a slope can be difficult.  I created basins around the plants where possible to allow water to collect and seep into the soil rather than running straight down.  But, as these basins were more shallow than was ideal in many cases, I've also used upturned water bottles to dispense water slowly below ground level.


The slope's face curves from west to south.  The side further to the south is less protected from the sun so I've used more succulents in that area. 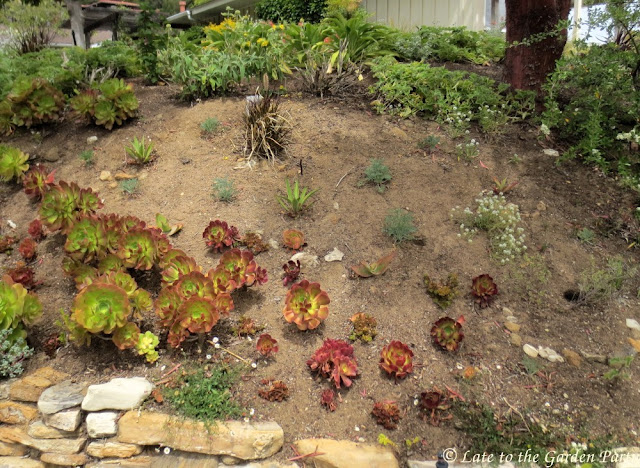 This area is even steeper than the west side and was very difficult to plant so I made do with smaller plants that required less digging and soil preparation.

Eventually, I'd like to bring in more large rocks and try to at least partially terrace the south end of this slope but that project is still a ways down on my "to do" list.  My knee and I are taking a break from any further work on sloped surfaces for a time.

Posted by Kris Peterson at 9:39 AM