Two garden vignettes struck my fancy this week so I'm sharing both as part of the Wednesday Vignette theme hosted by Anna at Flutter & Hum.

The first is a photo taken of an Agave vilmoriniana (Octopus Agave) in my dry garden.  The shot was taken in the late afternoon from the slope side of my dry garden looking back toward the house, an angle not usually viewed by visitors.  I like the way the sun and shadows emphasize the curves of the agave's twisted leaves, as well as the way the colors of the surrounding plants play off one another.

The second vignette features Pennisetum setaceum 'Rubrum' (aka purple fountain grass).  In the first photo, the sun picked up the soft fuzzy qualities of the flower plumes.  It's a gorgeous plant this time of year, when other plants are usually in full retreat from the sun and heat.  Like Stipa tenuissima (Mexican feather grass), this plant has a reputation for being invasive in California but, unlike the former, I've seen absolutely no sign of re-seeding by this species in my own garden.


In my second photo, the sun was fading on the horizon so the plumes don't shine as brightly but the plant in the foreground is nicely echoed by a second Pennisetum in the distance.  I cut the plant in the driveway back hard in winter and it still hasn't fully regained its former dimensions. 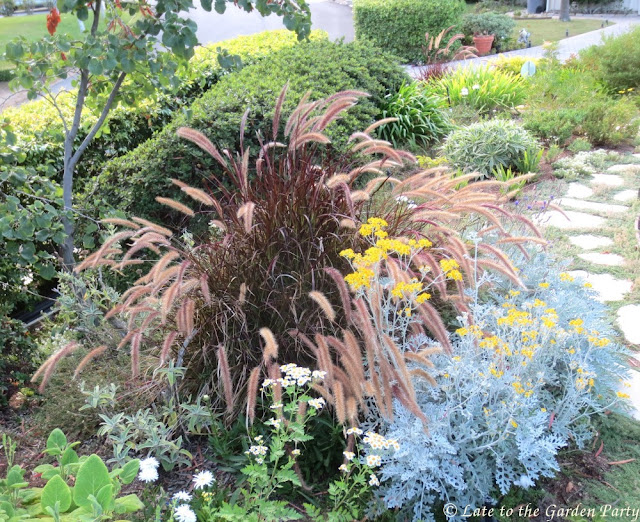 For other vignettes, from the garden and otherwise, visit Anna at Flutter and Hum.