In a Vase on Monday: Fireworks & More

I got an early start on this week's vase, or I should say vases.  I had guests coming over to watch the Independence Day fireworks on Saturday night so I put 3 vases together as decoration early that day.  The first vase, for the front entryway, is the most vibrant. 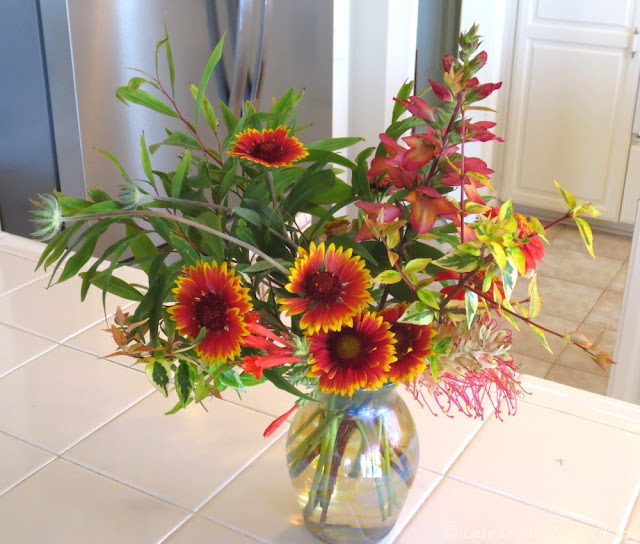 I started with the last Digiplexis stem in bloom in the backyard border and selected other flowers that played off the colors in that stem.


The second arrangement was intended for the dining table and the flowers were selected to play off the table runner and the dark tones of the glass vase.

The third vase was intended to dress up the dessert and drink table on the back patio.  There's very little in the way of true red color in my garden so my holiday centerpiece was pink, white and blue rather than red, white and blue.  I started with the pink lily, grown from a gift received with a bulb order several years ago.  As it's undistinguished in form and has no scent, I had no compunction whatsoever about cutting it. 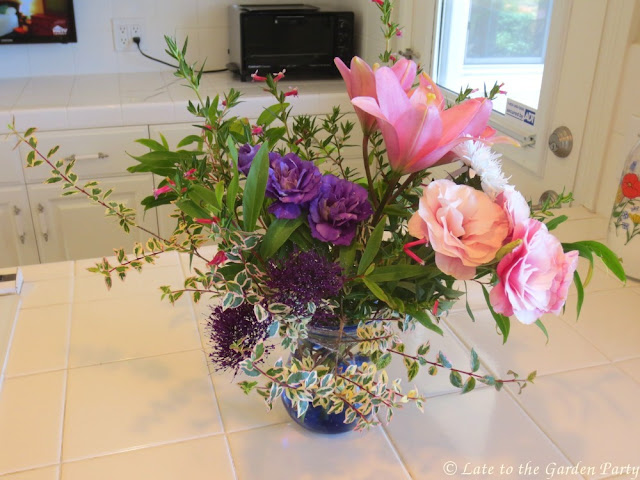 After weeks of hot, sticky weather, July 4th suddenly turned cool and windy.  We moved inside for dessert and drinks before heading outside later for a closer view of the fireworks, donning jackets.  "Cool" by southern California standards meant 61F (16C), which may make some of you laugh but we don't consider that shorts and t-shirts weather.

The side-lined pink, white and blue vase was relegated to my home office the next day, where it attracted the attention of the furry household resident.

Despite local restrictions banning fireworks in residential areas due to the heightened risk of fires under our current drought conditions, LOTS of firework displays could be seen from our backyard.  As well as the authorized public park displays, many people risked fines and fires by setting fireworks off in their backyards.  As in prior years, dozens of displays were visible, some as far away as Long Beach, Fountain Valley, and eastern Los Angeles County.  Unfortunately, I have neither the camera equipment nor the photographic skill to effectively capture these, although I managed a few shots that may at least be recognizable as fireworks.

For more floral displays, visit Cathy at Rambling in the Garden to see what she's put in a vase this week and to find links to the contributions of other participating gardeners.

Posted by Kris Peterson at 8:33 AM