Happy new year!  Wherever you are and whatever you're doing, I hope you're enjoying the holiday.  I also hope that, once those of you in frozen zones thaw out, this will be the start of a glorious year in the garden for everyone.

Here in Southern California, it's sunny and warm.  It also remains very, very dry.  In fact, 2013 was the driest year recorded for Los Angeles since 1877, when record keeping began.  We got just 3.6 inches (9.14 centimeters) of rain last year and there's no rain in the forecast in the near future.  It's nonetheless a good day to poke about in the garden but instead I find myself sitting at my computer, looking at the pictures I've taken over the past year, evaluating what I've done and what I want to do in 2014.  The biggest changes in my garden in 2013 occurred on the southeast side of the house, stemming from the removal of a 60 foot Eucalyptus tree.  That one change led to the transformation of a large segment of the garden and it may trigger still more changes in 2014.

I hadn't originally planned on taking out the Eucalyptus tree.  Just before Christmas in 2012, we were approached by a neighbor about removing the tree, which over time had grown to block her view of the Los Angeles harbor.  After discussion with her, review of our local statute on "view conservation,"  and consultation with an arborist regarding the health of the tree, we agreed to cut it down.  It wasn't an easy decision and I felt quite bad about it at the time but I've written about my decision-making angst before so I won't dwell on it here.

The decision to remove the tree was made in early January 2013 but, due to rain delays, the tree didn't come down until early February.  It was a major production that literally took all day (which you can read about in detail here). 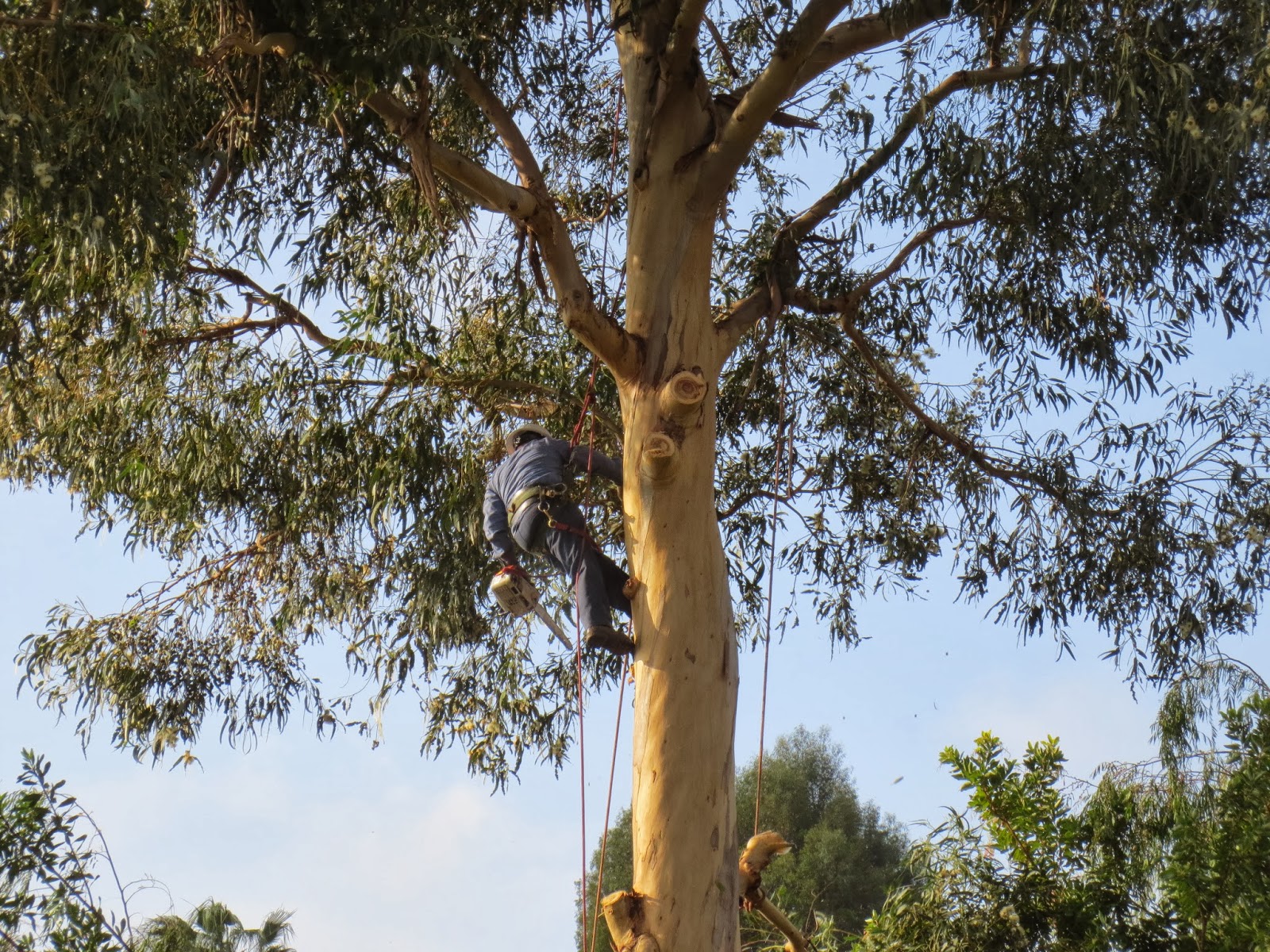 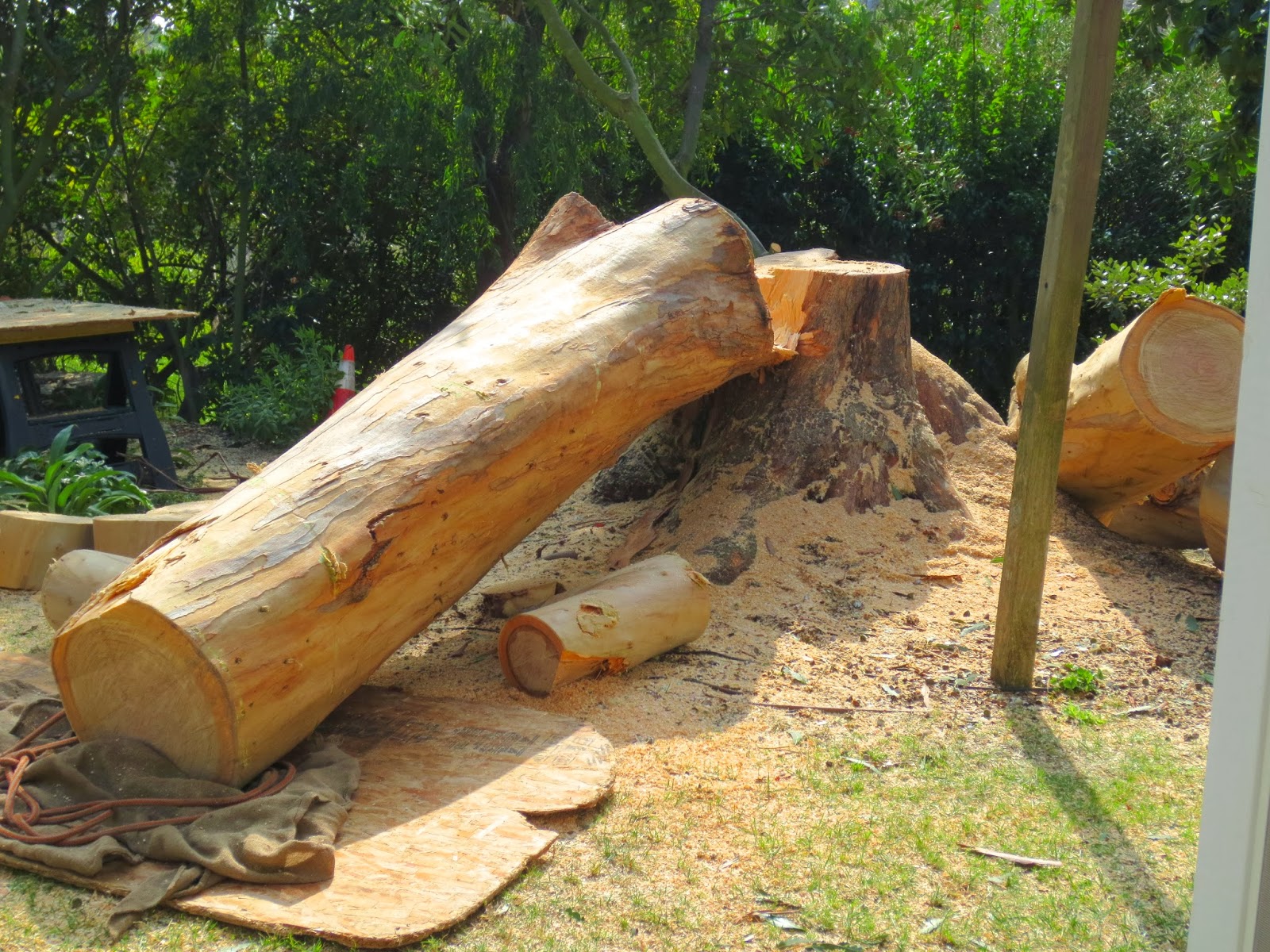 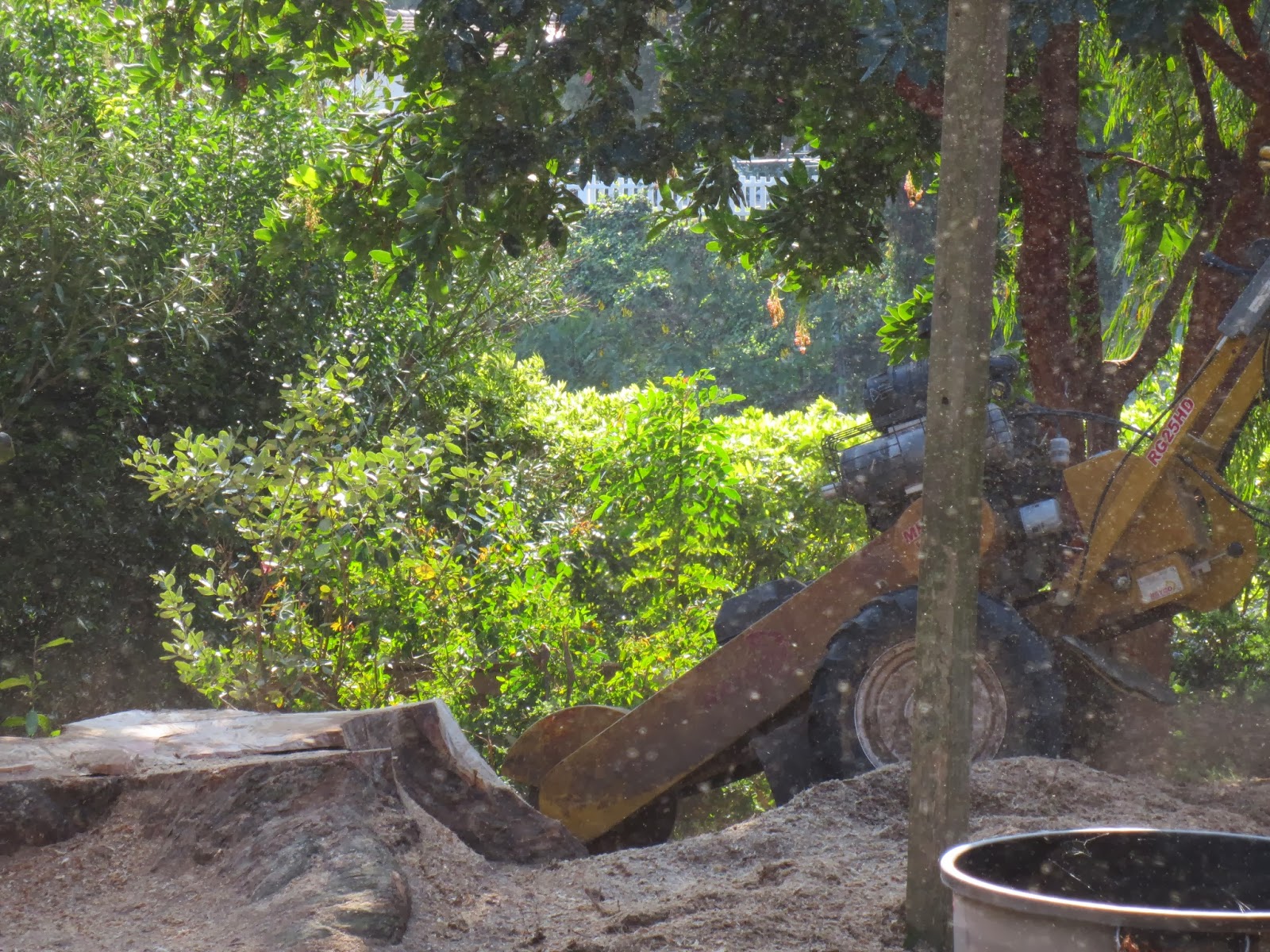 The side yard was left looking very bare. 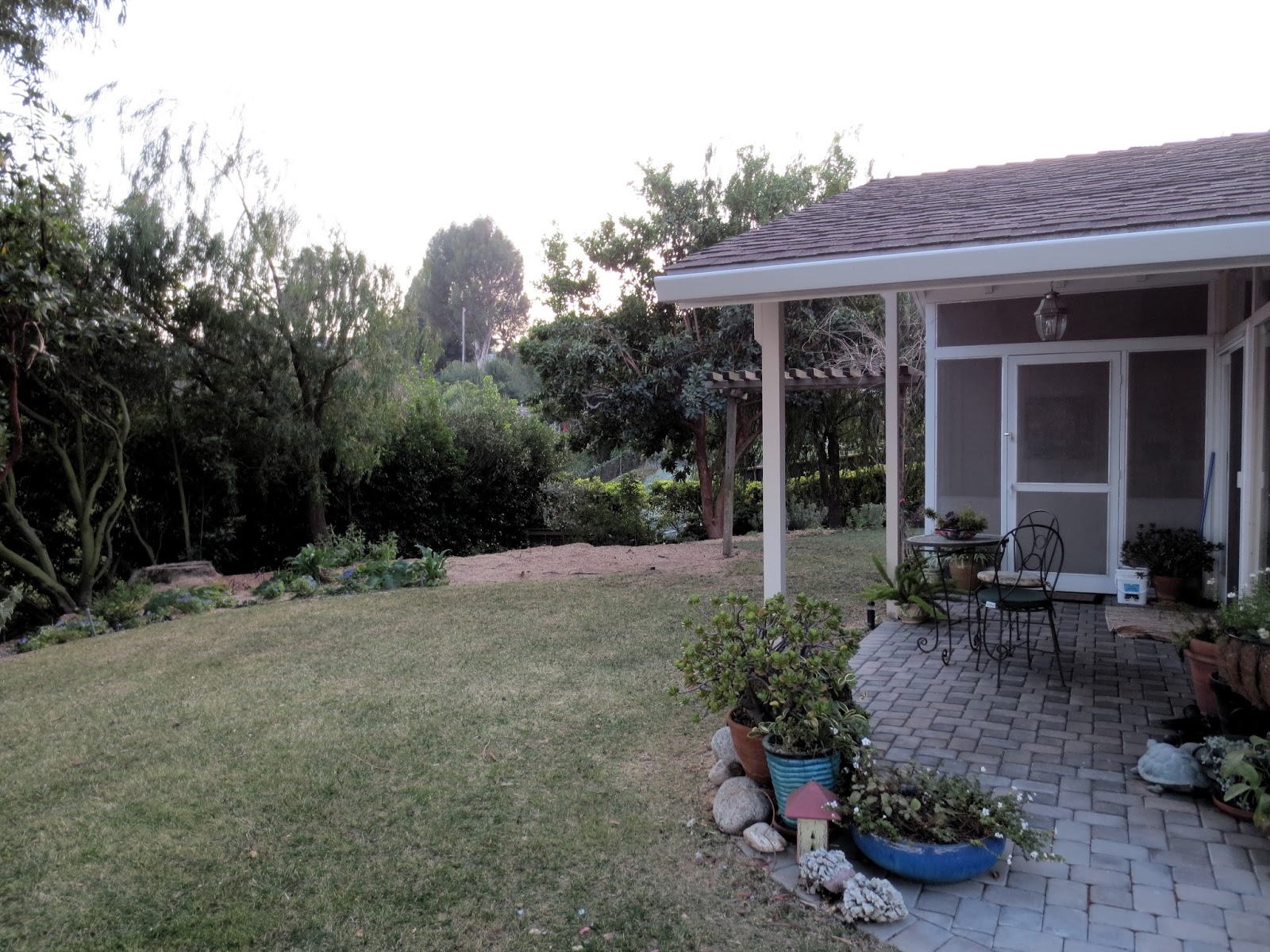 I rushed to plant the vacant area.  While I gave some thought to a planting plan, in retrospect I probably gave less consideration to how I wanted to use the space than I might have, focusing instead on the choice of plants that would be suitable in what had been transformed from one of the shadiest areas of our property to the sunniest.

A little over a month after the tree came down the bed that it had been occupied looked like this: 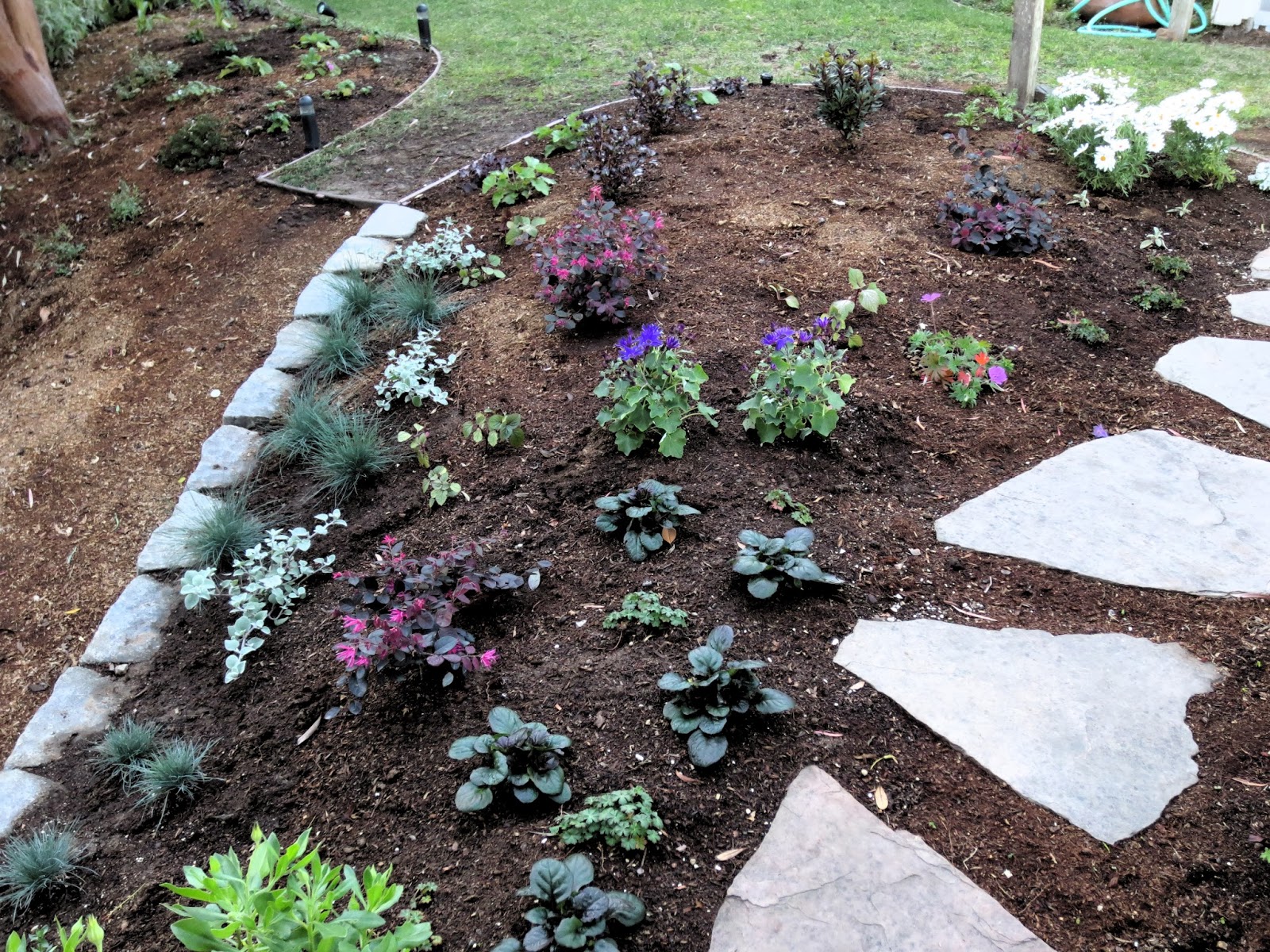 In the meantime, the plants on the other side of the pathway in the picture shown above were struggling.  They'd been selected for their ability to grow in shady conditions and, while a few enjoyed the increased sun exposure, many did not.  Over time, I moved some and introduced others.  Photos taken in July show that the empty spaces had been filled; however, I didn't feel that the space connected well with the surrounding area. 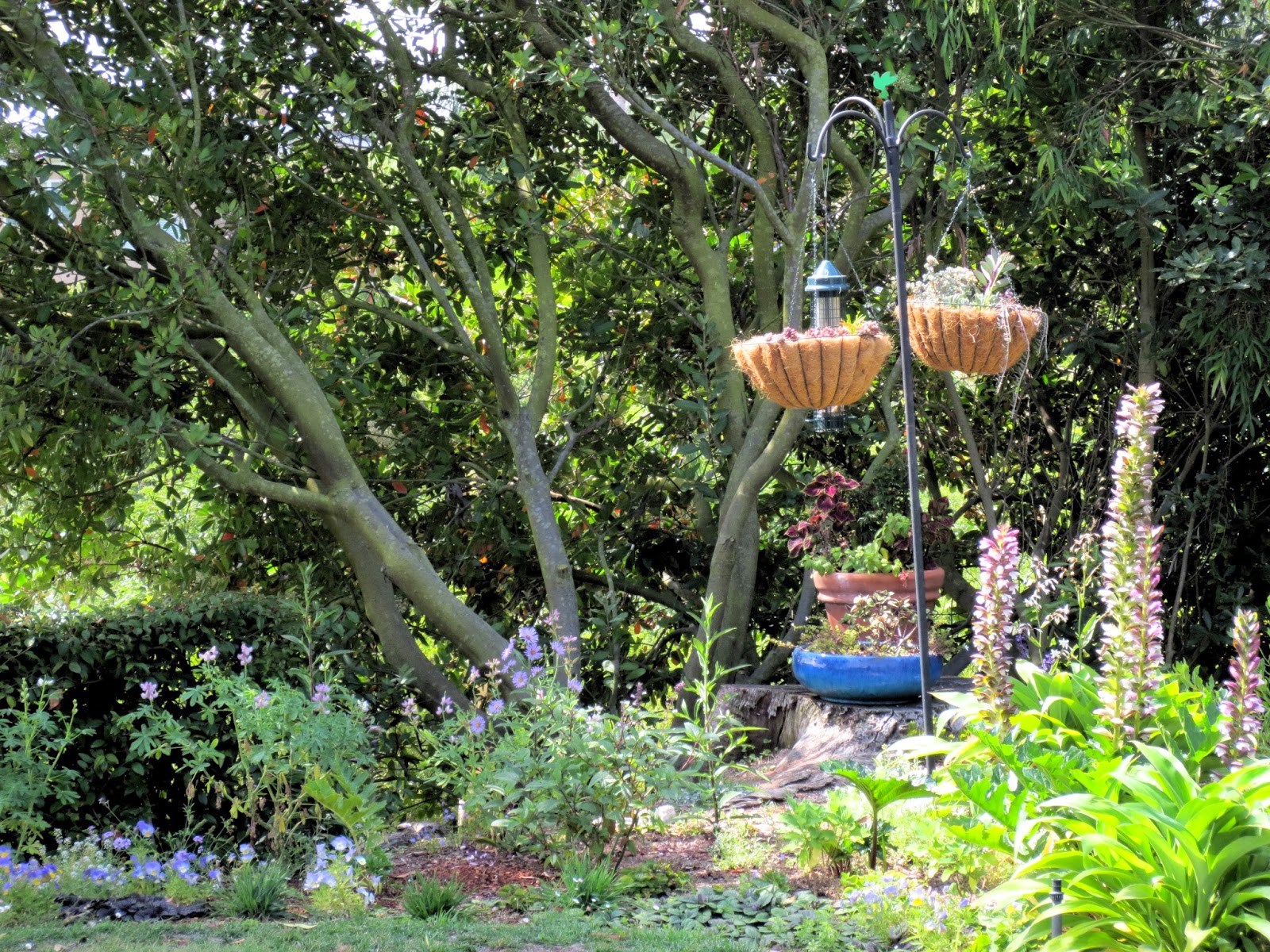 In fact, the whole area looked chopped up to me.  The grass area adjacent to the side borders hadn't recovered from the battering it received during the removal of the Eucalyptus tree and the pathway that had divided the area now looked silly coming to an abrupt end some 10 feet from the side yard patio. 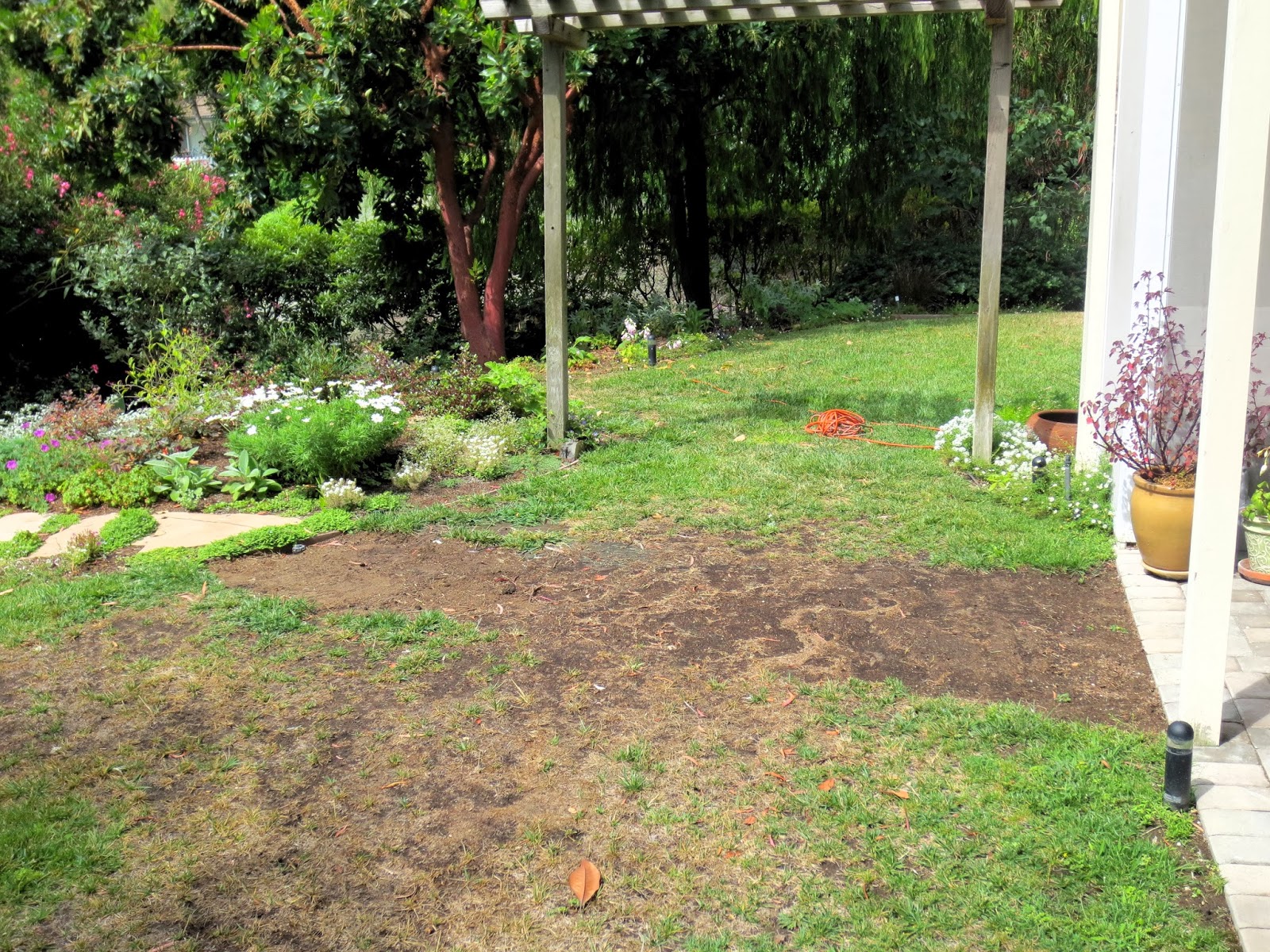 So, in August, we extended the pathway to the patio and also through the existing archway to connect with another path that led down a slight slope toward an area behind the hedge along the street. 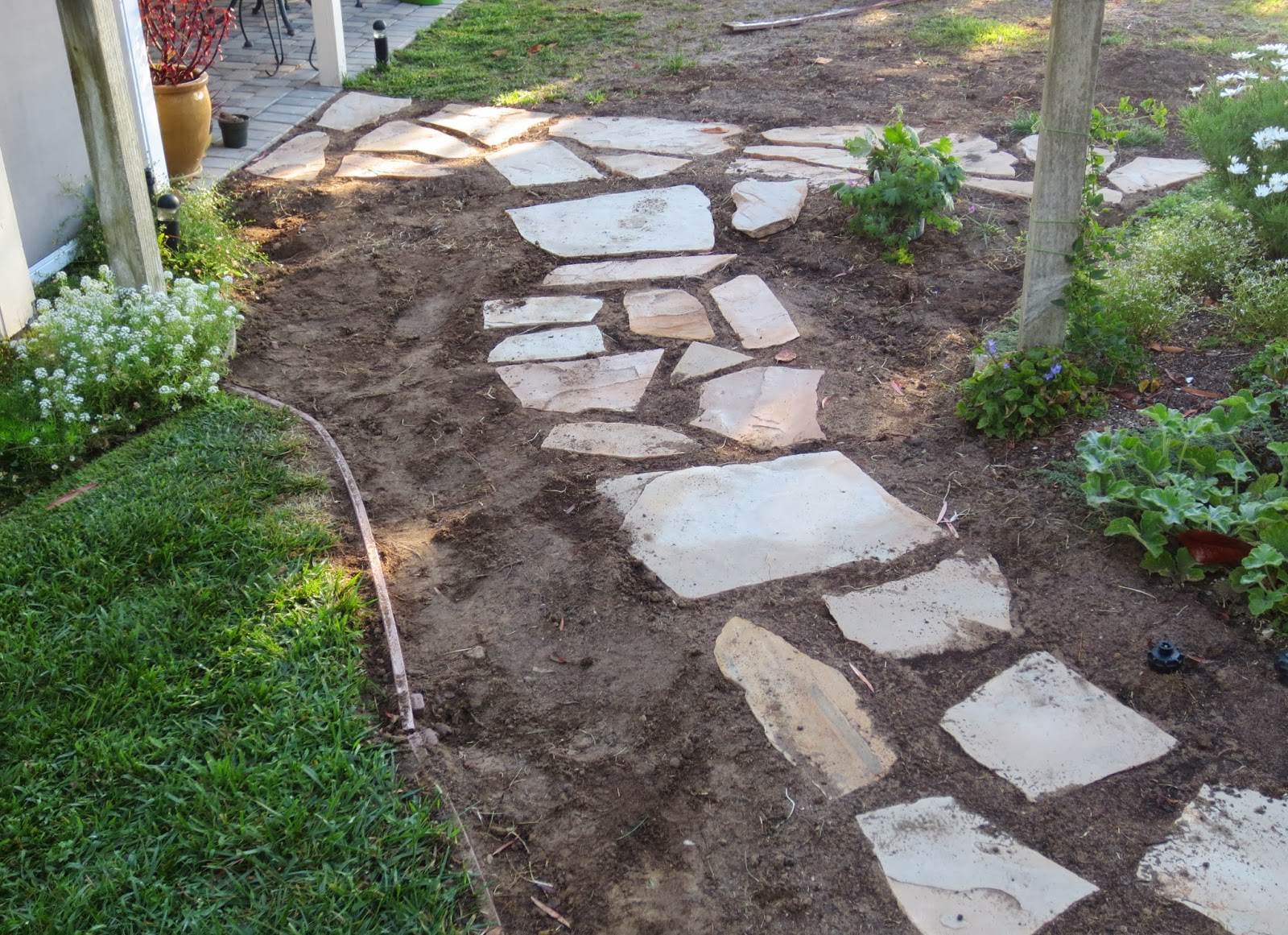 Then we elected to tear out the remainder of the grass in the side yard. 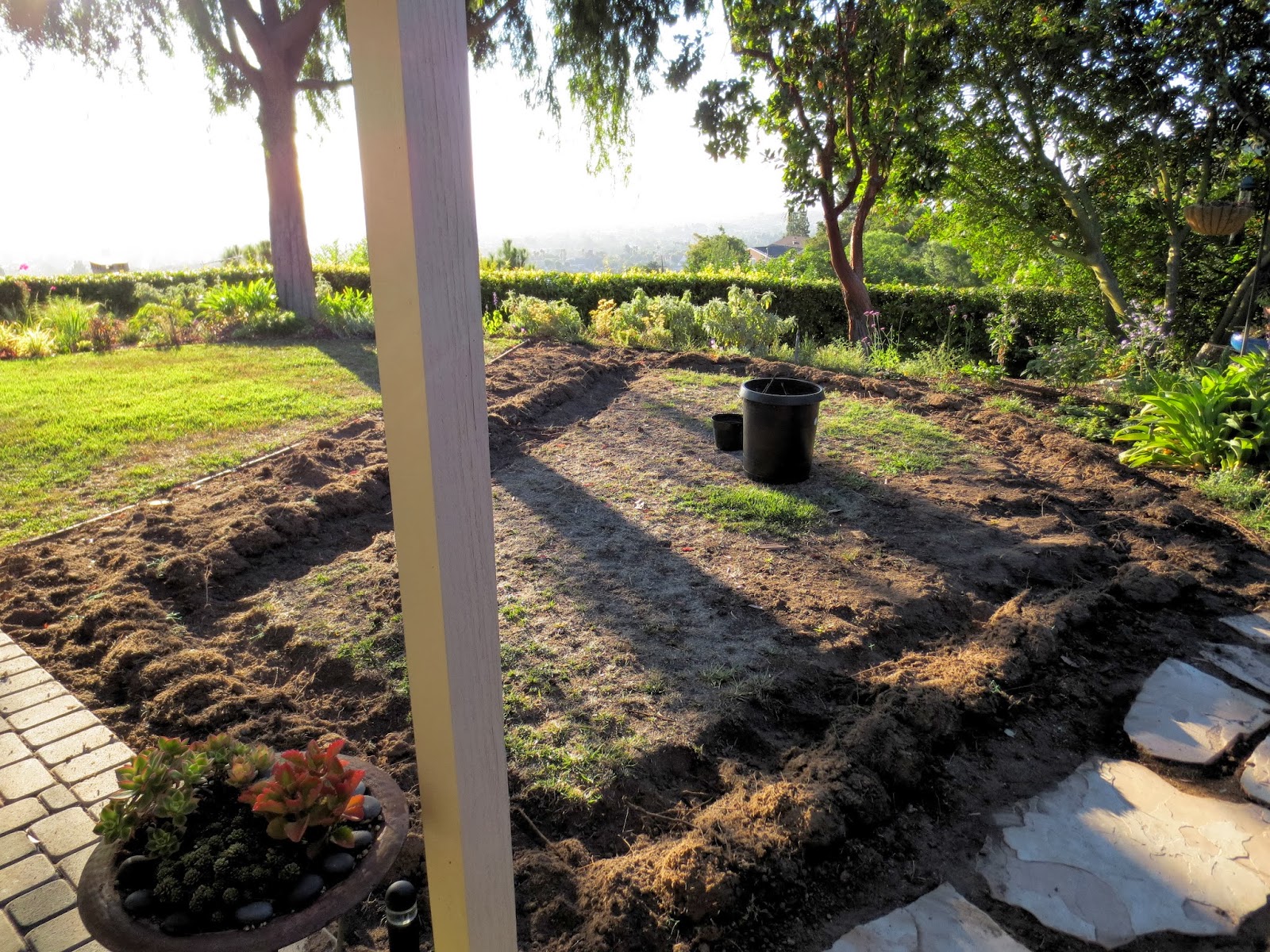 I got a little ahead of myself (as usual) and began planting the area surrounding the new pathway in early September. 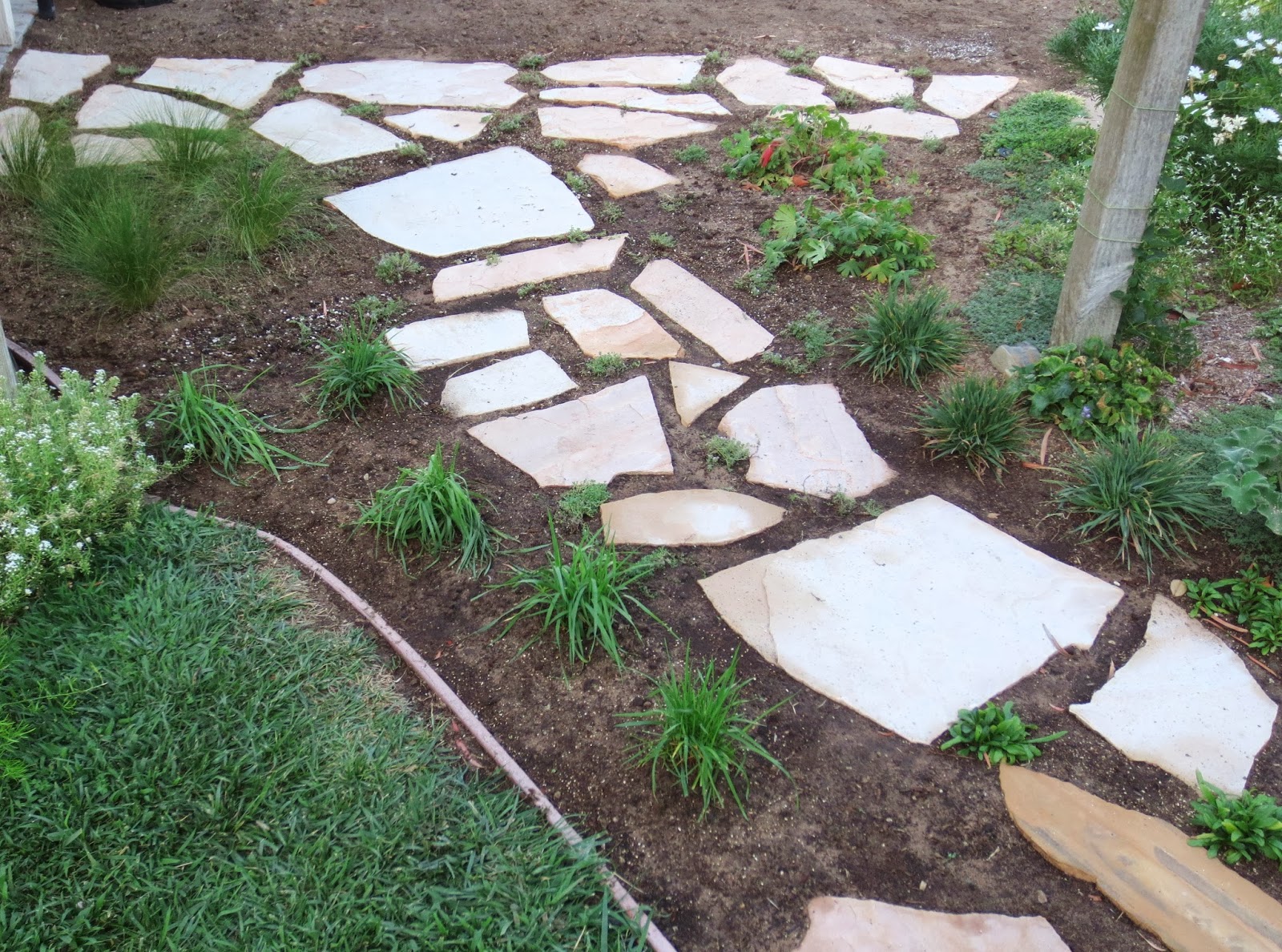 I had the sense to haul in more topsoil for the main area we'd stripped of grass. 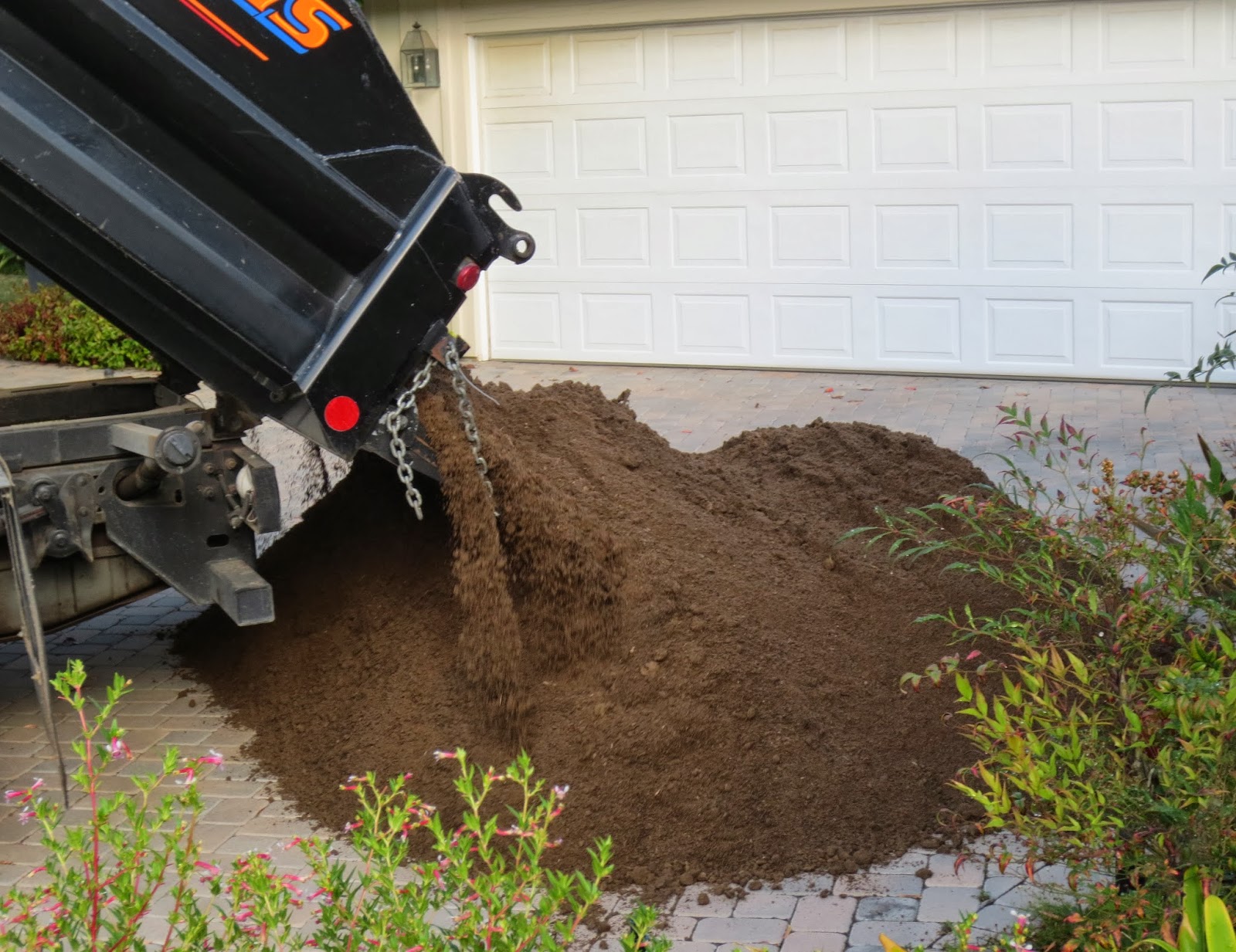 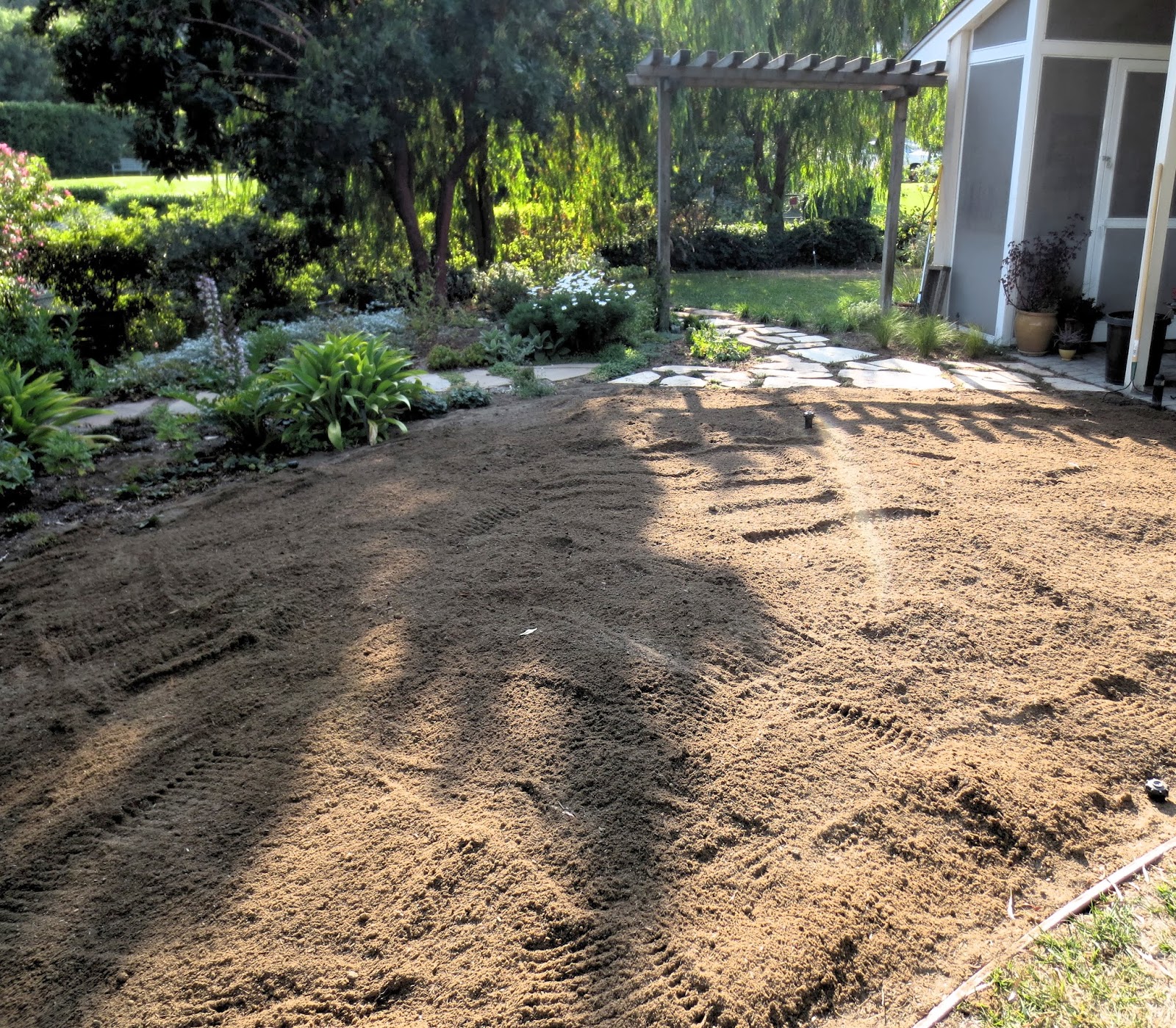 But I started planting the new space before we got around to laying more flagstone to divide the space into workable borders. 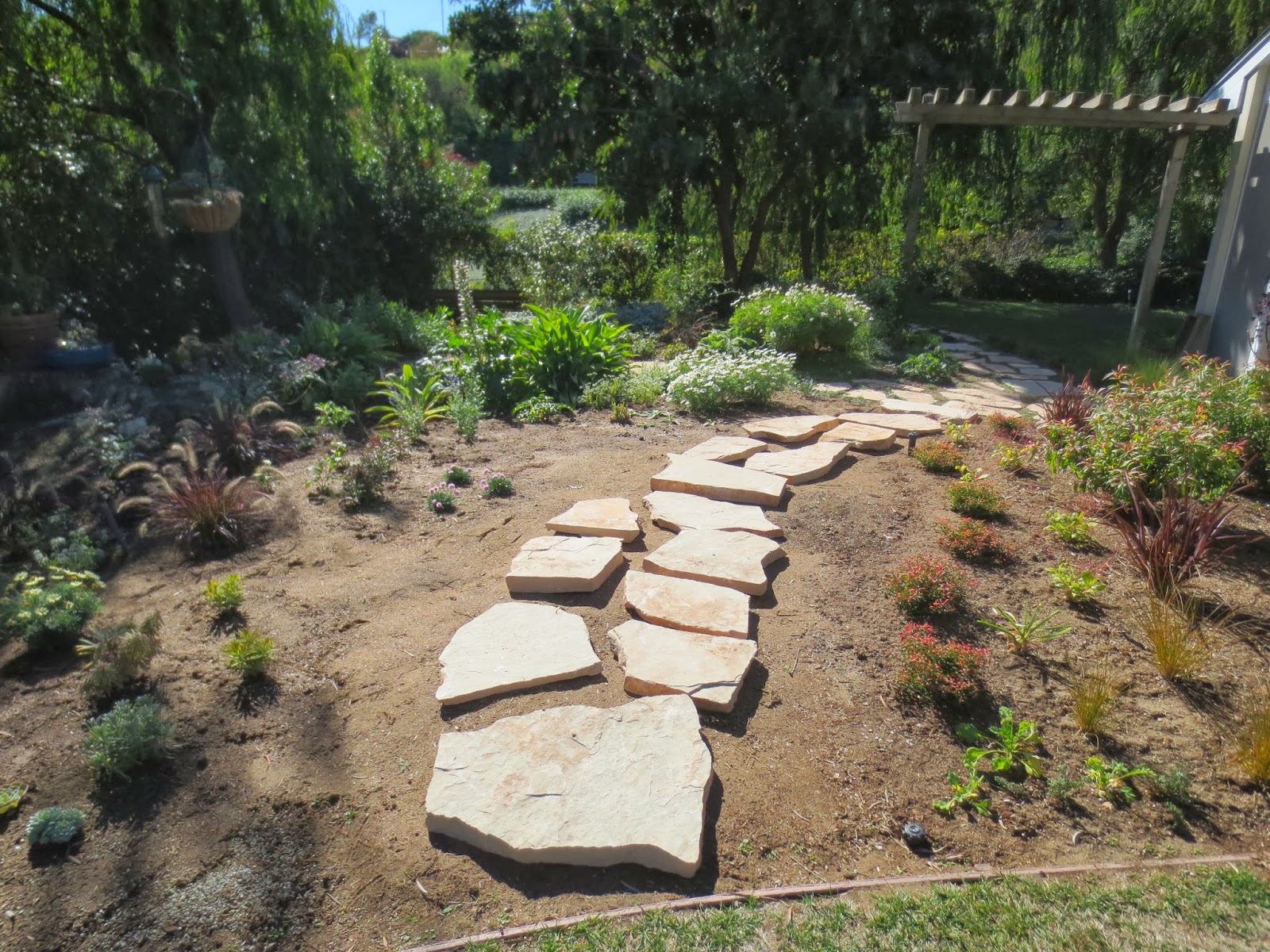 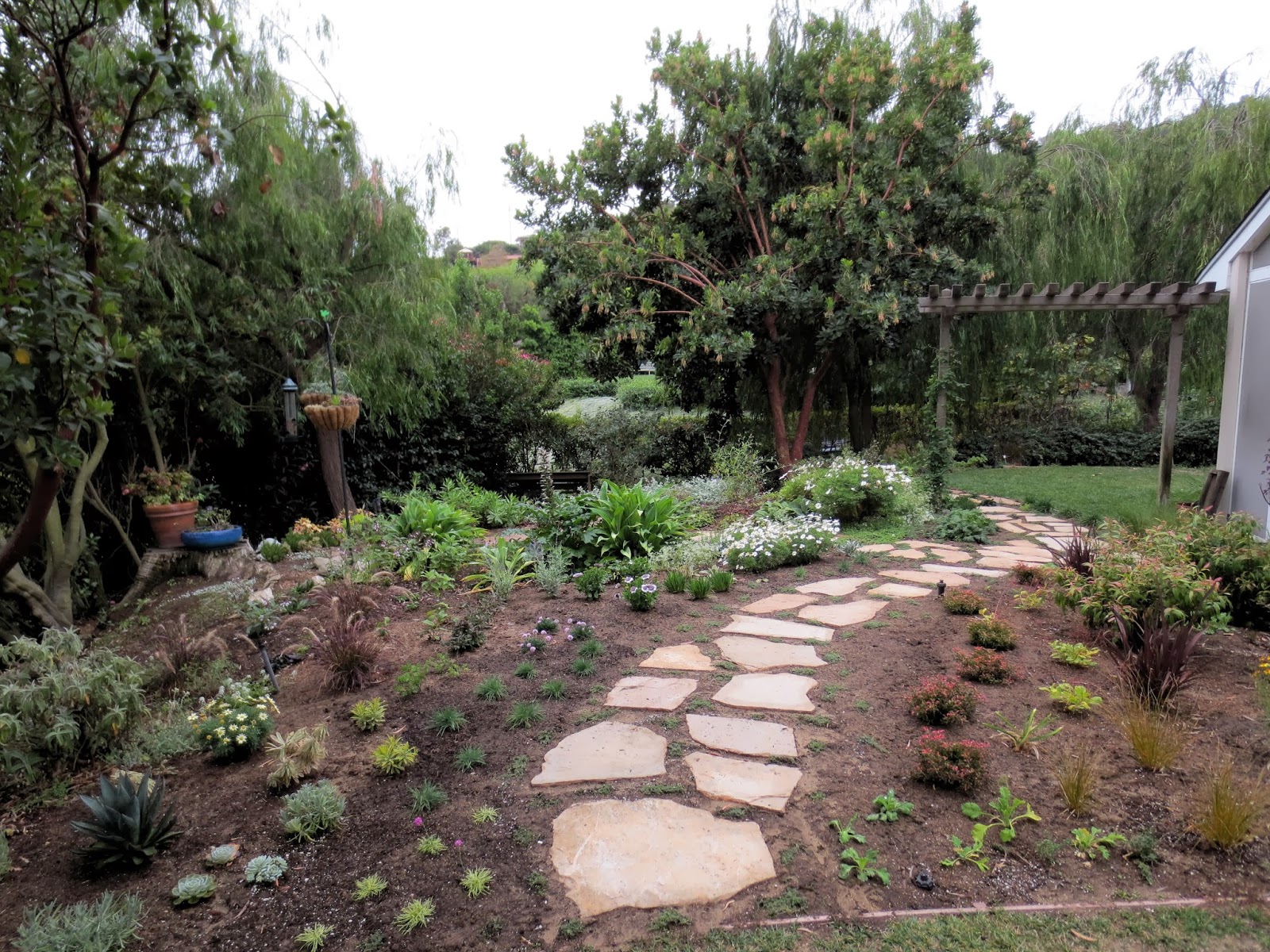 The area's slowly filling in. 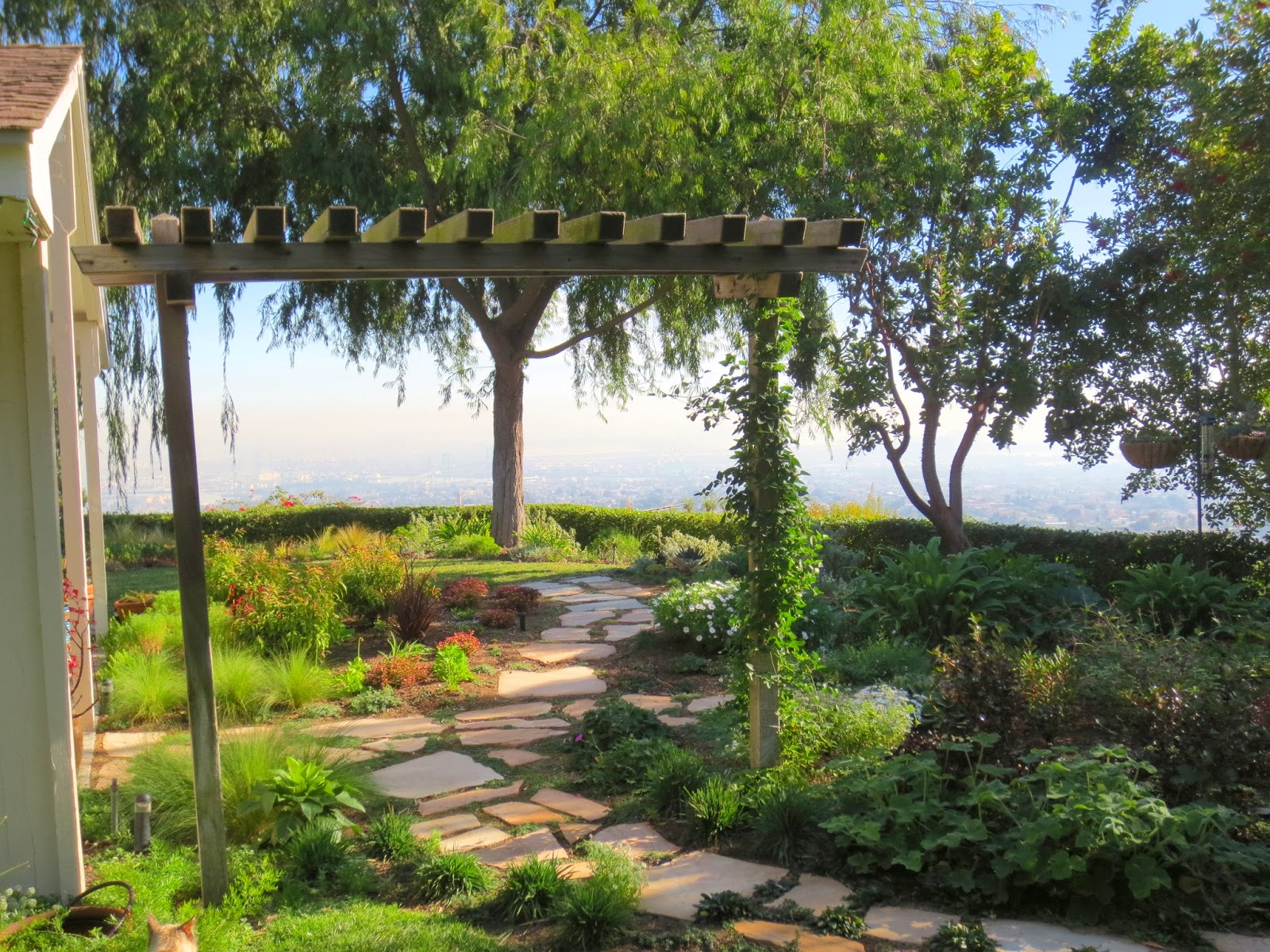 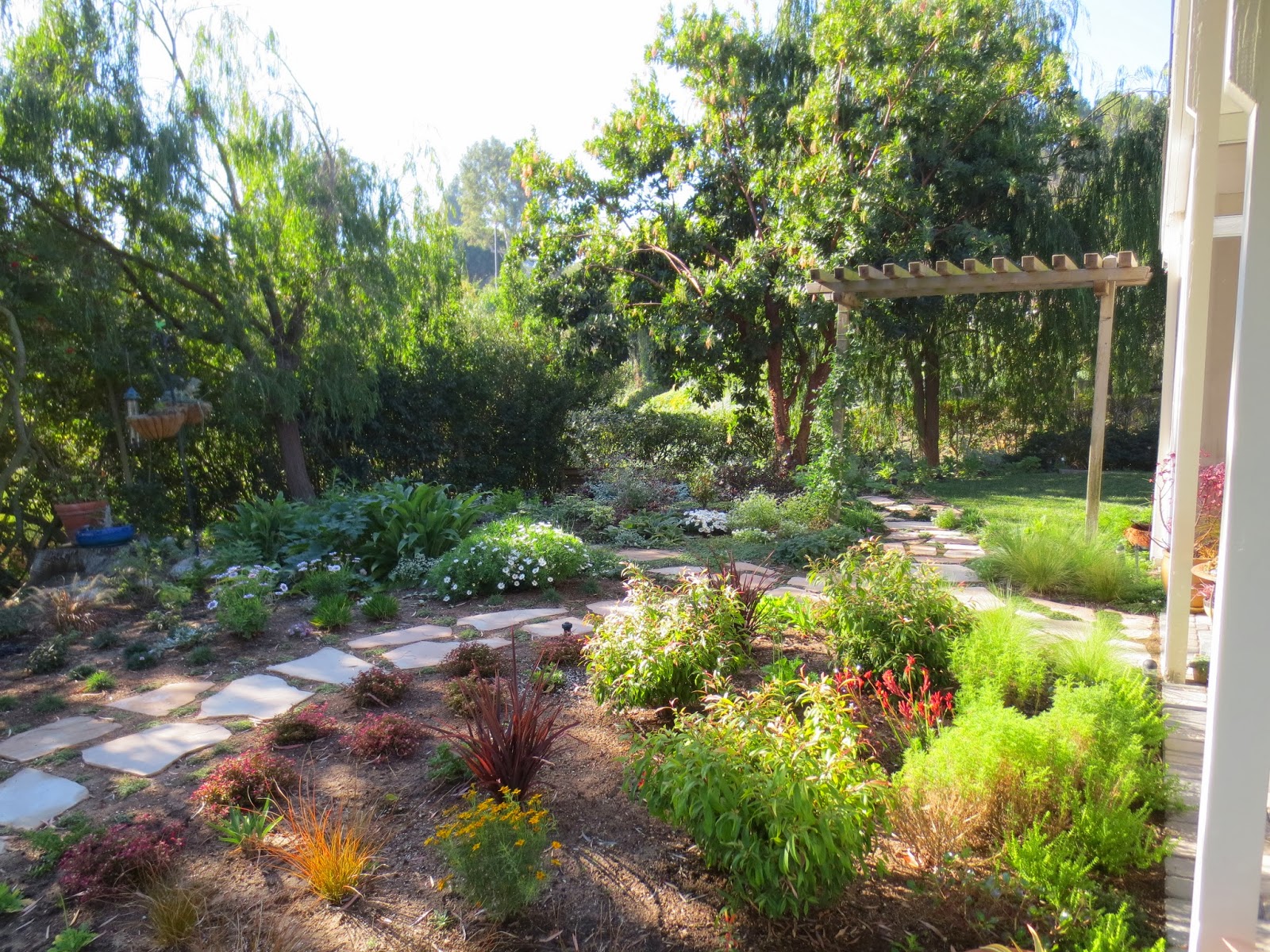 Overall, despite leaping into the redesign of this area without a solid plan at the start, I'm fairly satisfied with how the side yard looks, although I already expect I'll be changing out some of my plant selections in 2014.  However, the biggest issue for me now is what to do to improve the flow from the side yard into the backyard.  I think I'm going to pull out more grass in the backyard, extending the planted area around the fountain along the pathway running parallel to our living room to connect with the border adjacent to the side yard patio.


I'm still grappling with whether to leave a wide swath of grass to serve as a pathway or tear it all out and continue the flagstone.  The transition from flagstone to grass feels abrupt to me.  My husband believes that I'll eventually pull out all of the grass, which is what I did at our last house.  But this garden is much larger than the tiny space I gardened in before and I'm not sure that getting rid of every shred of grass is appropriate here.  The grass provides a place for the eye to rest and I think this garden needs that.  The idea of pulling out all the grass is also overwhelming - it would require an investment of time and money I'm not sure we're prepared to make all at once.  So, while I want to keep the big picture in mind and factor how one area relates to the areas adjacent to it, I suspect that I'll continue to chip away at my garden renovation piece by piece, allowing one decision to lead to another and then to another...

Do you plan any major overhauls to your garden in 2014?