I have a tendency to fall in love with plants, bringing my infatuations home with what is, at best, a fuzzy notion as to where I might put them.  However, during the fall planting season, when I was focused on the design of the side garden and the redesign of portions of the backyard border, I spent considerable effort in selecting plants that I thought would be culturally suited to the areas in question and would also coordinate well with one another. Nonetheless, plant availability factored heavily into the final selection process as leaving empty spaces in a bed for any extended period goes against my nature.  So, for example, when I planning the area surrounding the side yard patio, I specified "orange flowered annual" and gave myself license to pick from the options available in that category at that time.  I selected Ursinia anthemoides 'Solar Fire,' grown by Annie's Annuals, to fill that role.  I liked the bright green ferny foliage and the flowers I'd seen in a demonstration bed at Roger's Gardens.  Annie's site claimed that, in zone 10, no matter what time of year they were planted, these would bloom "shortly thereafter."  After more than 3 months, the first buds are finally opening but, in the meantime, the foliage has gone from lacy to scruffy.  In addition, the first flowers are much smaller than the 2.5 inches they were advertised to be.

The fault may be entirely mine.  I probably didn't provide enough fertilizer.  The water provided by my irrigation system may have been insufficient.  And maybe Ursinia doesn't like our dry Santa Ana winds.  In any case, despite the fact that the plants are finally covered in unopened buds, I'm sorely tempted to yank them out right now and replace them with either Iceland poppies, which are already flowering in the surrounding area, or more dwarf Anigozanthos (Kangaroo Paws), provided I can find them. 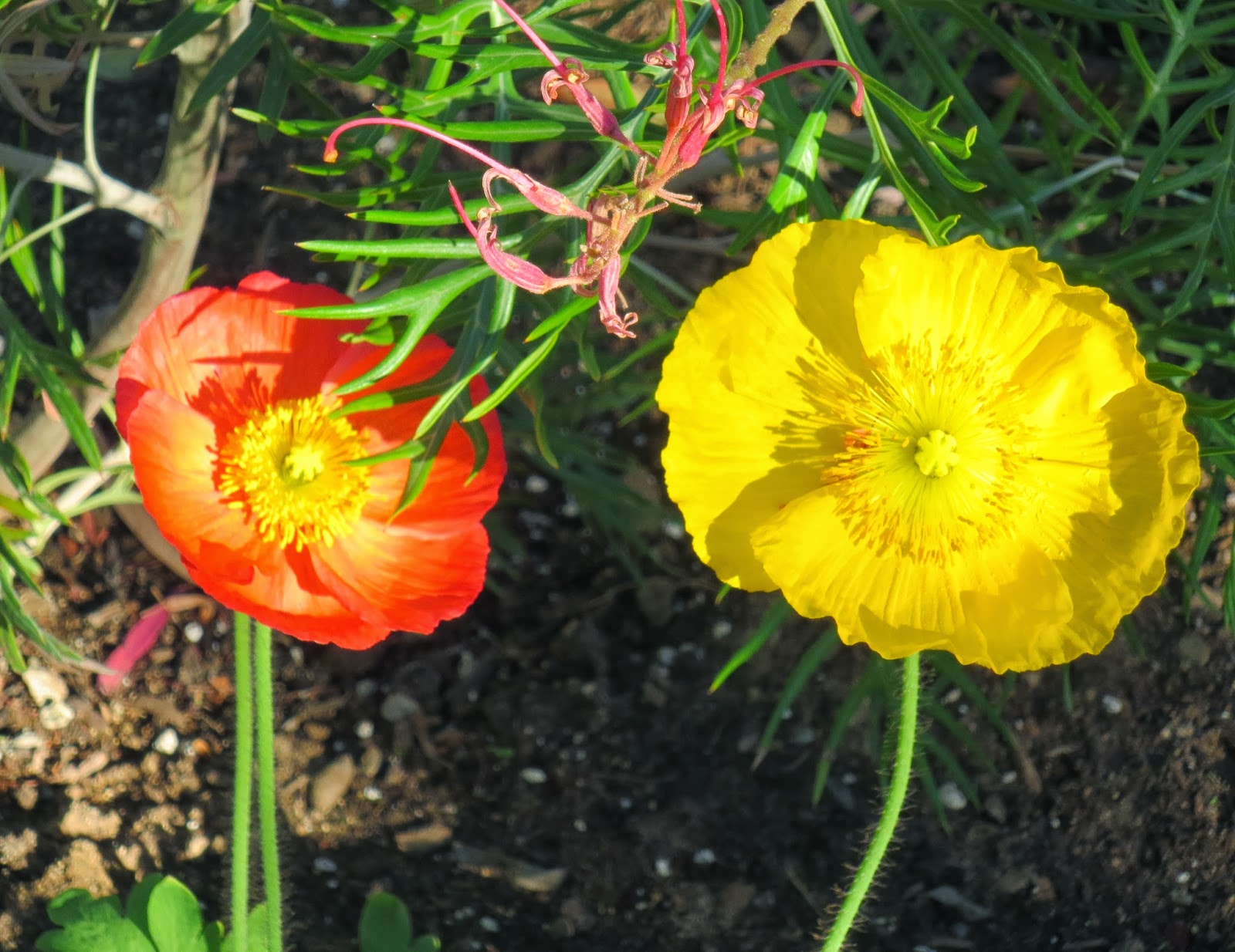 I'll probably hold off another couple of weeks to see if Ursinia blankets its scruffy foliage in orange/gold blooms  - unless I come across more of the dwarf Kangaroo Paws first.

In the good news category, I like the mix of Stipa tenuissima (Mexican feather grass), Coprosma repens 'Plum Hussey' and Crassula lycopodioides to the right of the Ursinia. 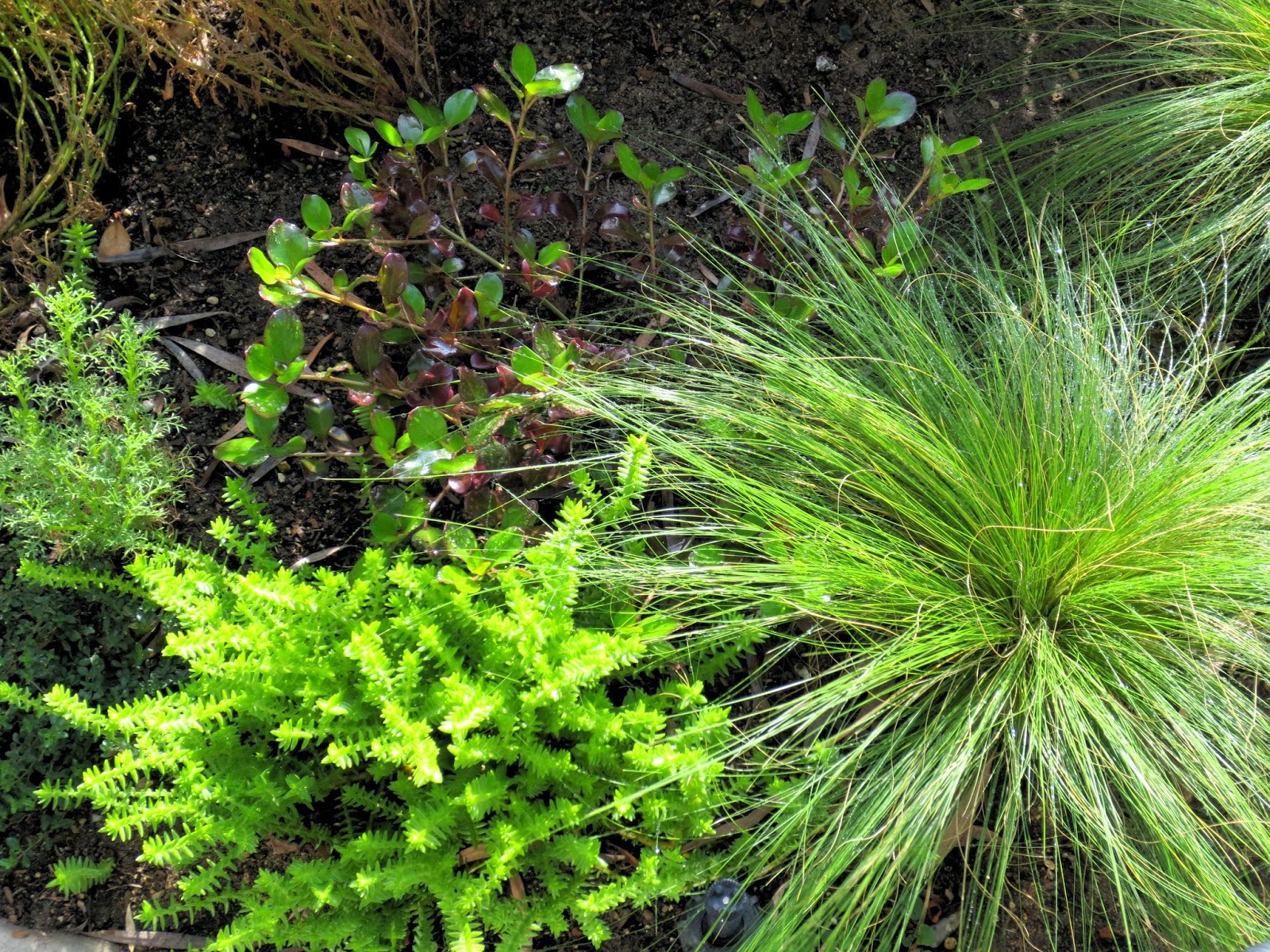 I also like the nearby combination of Agonis flexuosa 'Nana,' Stipa tenuissima, Iceland poppies, and Alternanthera tenella 'Crinkle Red.' 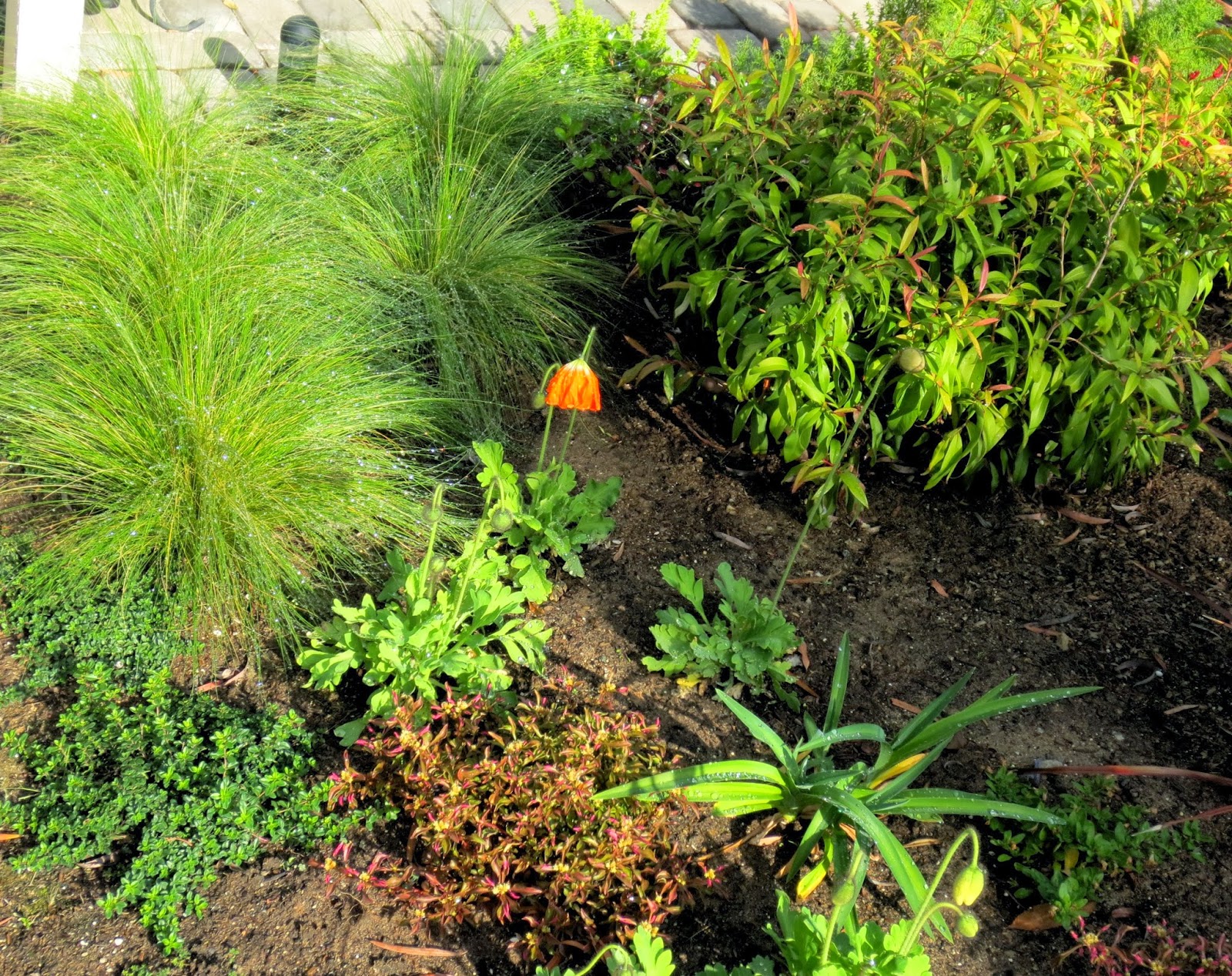 Unfortunately, I'm also having misgivings about some changes I made to the backyard border.  I admit to being uninspired when it came to replanting the mid-section of that border after tearing out a mass of lavender hiding my Prostanthera ovalifolia 'Variegata' in October.  I ultimately installed 3 Nicotiana alata 'Lime Green' in front of that plant to echo its lime color and added 5 Digitalis x mertonensis in front of those but, from the start, I was concerned that the area looked too flat.  All 8 of those plants hugged the ground.  The Nicotiana is supposed to reach 3 feet and the Digitalis 2 feet so I assumed that time would remedy things.   I may be too impatient but, 10 weeks later, the area still looks flat.  While I'm confident that the Digitalis will be fine, I'm concerned with that the Nicotiana foliage remains utterly prostrate despite the fact that it's already displaying a few short stubby blooms. 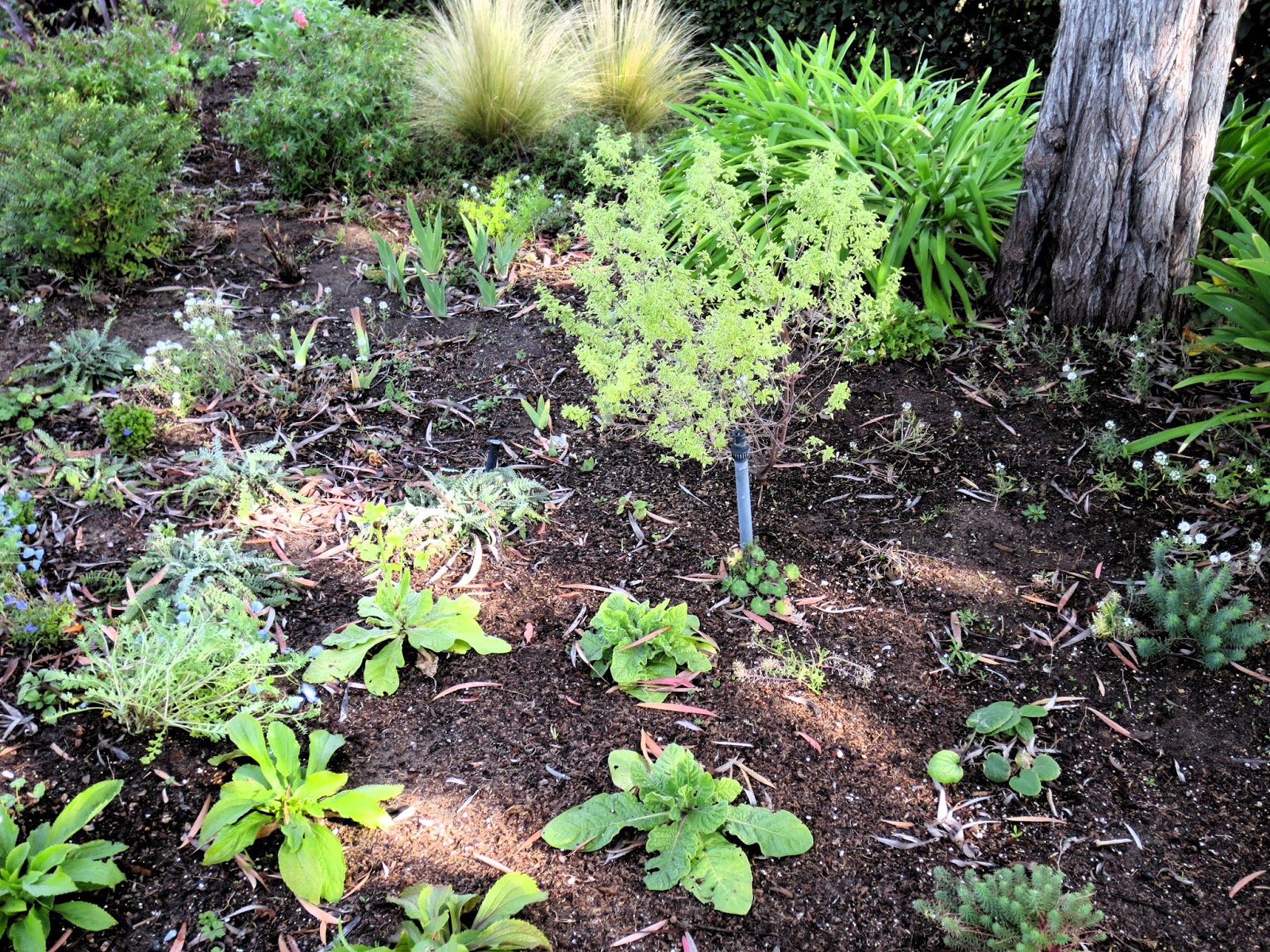 It doesn't help that the nearby Alchillea 'Moonshine' and the Itoh peony have yet to put new growth or that I chose the wrong spot to group some bearded Iris tubers I had on hand.  Rather than waiting to see if the Nicotiana gains stature in the next few months, I'm thinking of replacing it with a mass of Lomandra longifolia (recently featured here as one of my current favorite plants).  Any other ideas would be welcome.

The changes I made to the left side of the backyard border turned out somewhat better.  Although the plants still need to fill out a bit, I think the Tulbaghia violacea (Society Garlic) nicely complements the Erysimum linifolium 'Variegatum' and the Osteospermum ecklonis '3D Silver.' 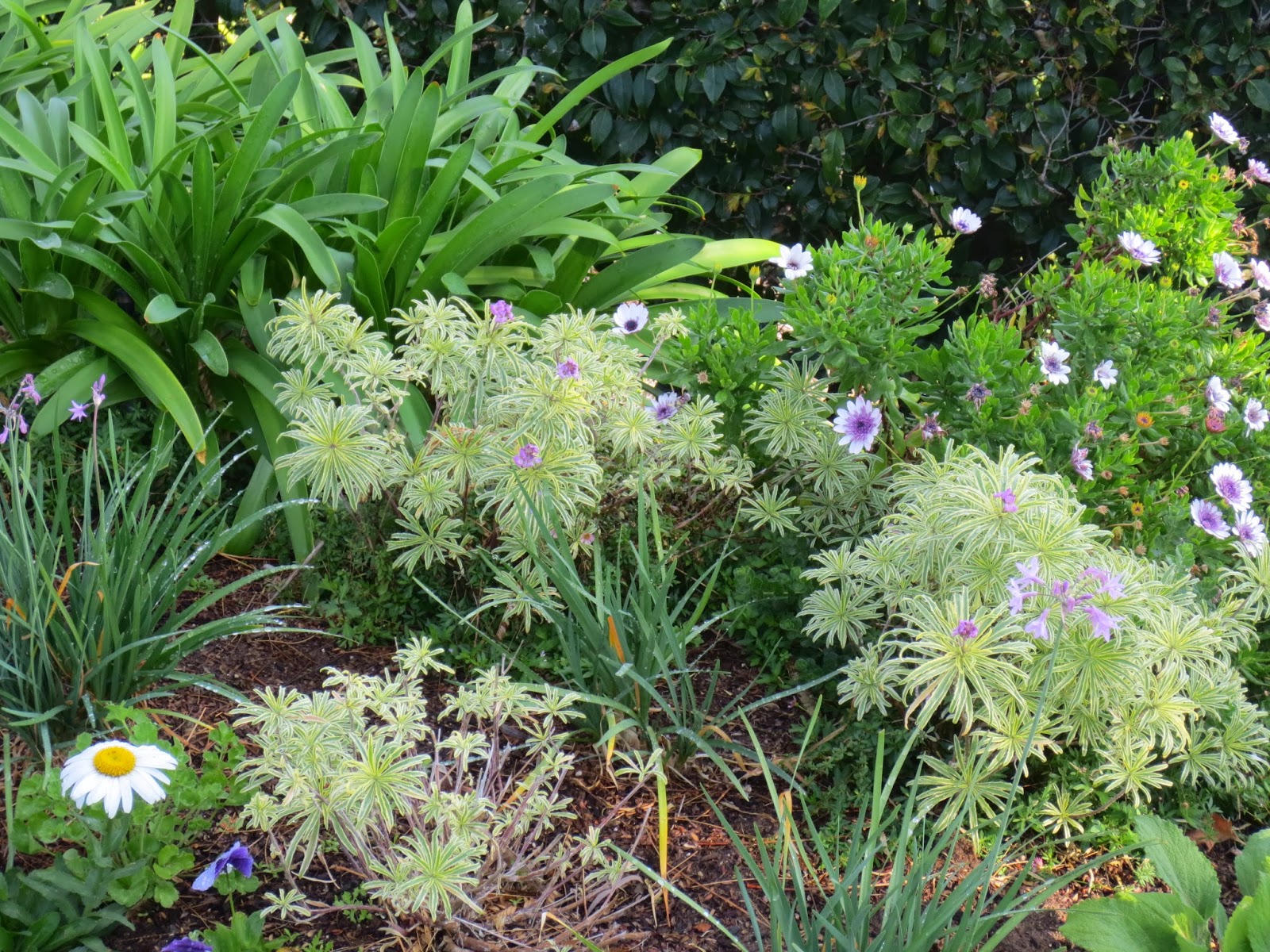 And then there's the bed that I planted last February, after our eucalyptus tree was removed.  I picked Dryms lanceolata to serve as the focal point of the bed.  While I like the plant, I'm not sure it's focal point material.

Ever since I saw the beautiful Japanese maple in one of my neighbor's gardens, I've been thinking of acquiring another one.  It occurs to me that a Japanese maple might be nice to replace the Mountain Pepper if the nearby Arbutus 'Marina' provides enough shade to prevent summer scorch.


Are you more patient than I am?  How long do you give a plants to fulfill their promise?