In a Vase on Monday: New arrivals

Sunday was Mother's Day here in the US.  Both my mother and my mother-in-law passed away in 2013 and my husband and I don't have children (unless you count the furry kind) so we had no specific plans for the day but I thought it might be nice to put together a few small arrangements and leave them curbside for neighbors to take.  I've done this before but I didn't really think about a giveaway until early Saturday evening when it was too windy to accomplish much.  As it turned out, I received a call from a family member about a medical emergency that got me up before dawn Sunday morning.  I was rattled by the call and found it hard to focus but, once I was up and moving around, I started cutting flowers to distract myself.  By the time I'd filled two water jugs with cuttings, I'd received a text letting me know that an emergency room visit had ruled out the worst case possibility.  Although it was already a bit late to put flowers on the curb, I threw together several tiny bouquets anyway.

Calmer, I went to work creating my own arrangements for "In a Vase on Monday," both built on blooms that have only recently appeared in my garden.  The first, inspired by the fragrant purple pea-like blooms of Psoralea pinnata,  is a mish-mash and not entirely satisfactory.

The second arrangement is more pulled together in my view.

For more IAVOM creations from contributors drawing inspiration from the materials around them, visit Cathy at Rambling in the Garden. 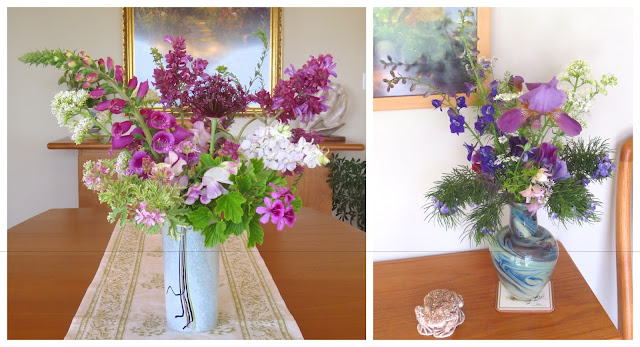