In a Vase on Monday: Garden Gems

At this time of year, it's uncommon for me to step into the garden on a Sunday morning without some notion of what I'm going to cut for "In a Vase on Monday," the weekly challenge posed by Cathy at Rambling in the Garden to uncover something in one's garden to use in a flower and/or foliage arrangement.  However, yesterday I had nothing in mind, other than a desire not to repeat myself.  When I scanned my back border for plants I haven't featured in a vase this year, I immediately lighted on two suitable prospects.

The first was Penstemon digitalis 'Onyx & Pearls'.  I put in three plants last July after purchasing them on a whim.  I usually avoid planting anything other than succulents during the summer months as doing otherwise is generally a self-defeating exercise.  To make matters worse, last July I was still engaged in an ongoing battle with gophers.  But the label on the Penstemon claimed that it required only occasional water, which differentiated it from most other Penstemons I've tried to grow here.  The foliage color was also unusual so I threw caution to the wind and went ahead.  I did plant all three with their roots inside gopher cages, though!

The Penstemons were flowering heavily on tall stems on Sunday so I cut three and went in search of appropriate companions.

The second plant that caught my eye on the initial scan of my back border was a coral gladiola.  It stuck out in part because its color is completely out of keeping with the surrounding plants.  According to my records, I planted a dozen Gladiolus nanus 'Nymph' bulbs on May 2018.  The flowers were supposed to be white with pink markings but those that survived to bloom in 2019 and 2020 are coral-pink with hot-pink markings. 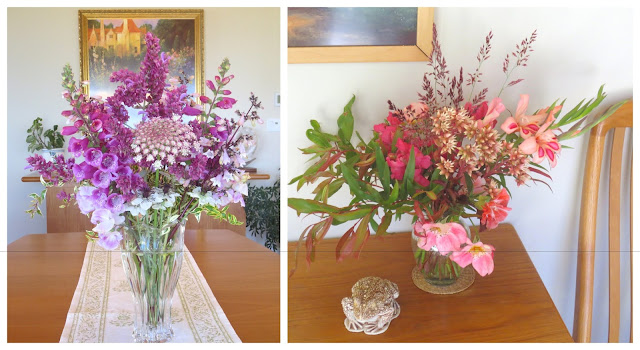