In a Vase on Monday: The Stars of my January Garden

I focused on two of the stars of my January garden this week.  One is close to reaching its peak and the other is nearly past it and both deserve a little time on the center stage.

Camellias generally don't last long in a vase but I enjoy having them in the house, if only briefly, so I can enjoy their beauty up close.


I usually feature the flower-like bracts of Leucadendron 'Wilson's Wonder' in a vase earlier in January.

Some of the yellow bracts of the Leucadendron are already developing the reddish color they get as they age and the central cones are gradually shifting from yellow to brown so the window to share them in a vase was narrowing.


We had a few warm days last week and expect to have even higher temperatures in the mid-to-upper 70sF this week.  Sadly, there's no rain in the forecast for the next couple of weeks but, if we can't have rain, maybe I'll at least have some new blooms to share next week.

For more IAVOM posts, check in with Cathy at Rambling in the Garden. 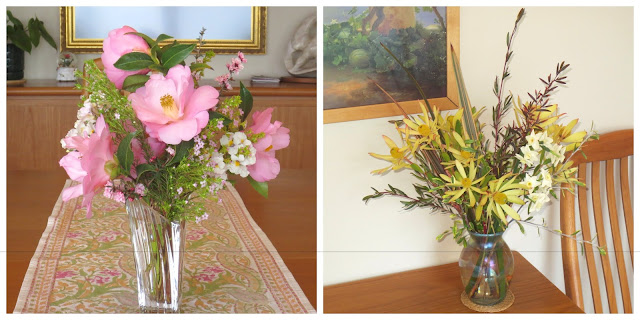