In a Vase on Monday: Understudies steal the show

I had a couple of blooms in mind as focal points for this week's vases but, in both cases, other flowers ended up stealing the spotlight.  In the first case, a tall-stemmed Lisianthus (Eustoma grandiflorum) was intended to be the centerpiece of a pink-themed arrangement but the shorter stems of a noID Camellia sasanqua I cut as an accent commanded more attention.


For my second case, I'd focused on the blooms of Metrosideros 'Springfire', which just began flowering off-season.  Then I discovered that one of Amaryllis (Hippeastrum) bulbs I'd planted in late October had produced its first bloom stalk.  This significantly overshadowed the small Metrosideros stems, although it's arguable that Grevillea 'Peaches & Cream' outshines even the Amaryllis, at least at present.


I'd cut 3 foxglove stems for inclusion in the first vase but they didn't complement the Camellias as well as I'd hoped so they were popped into a third vase with a few other stems snatched from the garden at the last minute.

For more IAVOM creations, visit Cathy at Rambling in the Garden to find links to posts to other contributors. 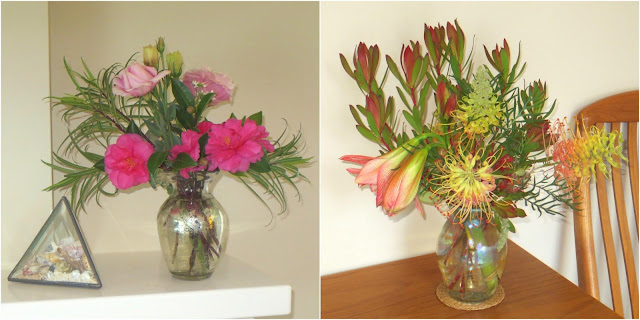