(Not) In a Vase on Monday: Thinking outside the vase

Cathy at Rambling in the Garden, our In a Vase on Monday host, is celebrating the fifth anniversary of this popular meme.  Last week she challenged participants to put together something not in a vase.  I've previously used pumpkins, driftwood and teapots to support arrangements so I tried harder to come up with something different, with mixed success.  My first arrangement doesn't deviate far from my norm.  I used an old basket, tucking in 2 jam jars to hold the contents that required water.


I also played around with a pair of concrete shoes my sister-in-law gave me years ago.

My other idea started with the recognition that many of my bromeliads have vase-like structures to hold water.

I use a bench surrounding our Magnolia tree in the front garden to display a variety of bromeliads and other potted plants.  On Sunday morning I filled the water tanks of 4 bromeliads with flowers.  In retrospect, I think the bromeliad arrangements would have been more attractive on their own rather than grouped together but I'd run out of time to fuss with them when I reached that conclusion.  As the nasty Santa Ana winds have started blowing again, it's not clear that these flowers will last long anyway.


To see how other garden bloggers responded to Cathy's challenge, visit her at Rambling in the Garden. 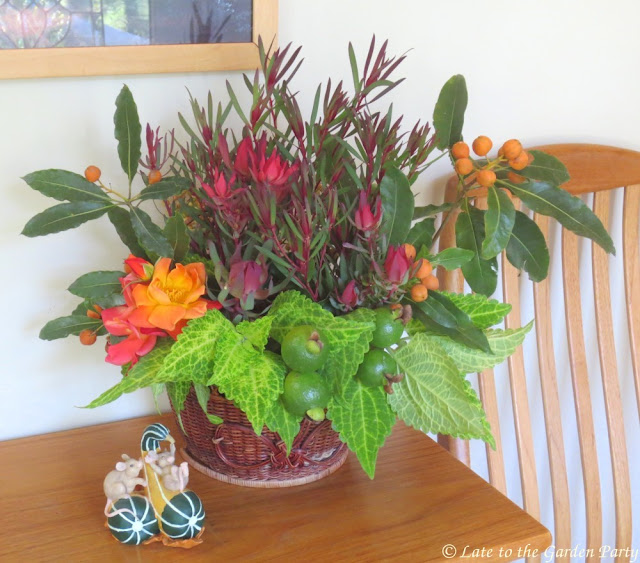 Cathy's challenge was a nice distraction from the stresses of the past week.  First there was the tumult of the midterm elections; then a White House firing that raises concerns about where the political roller coaster is heading; then yet another mass shooting, this one close to home; and then wildfires.  The fires dredge up both apprehensions associated with living in a fire danger zone and memories linked to the 1993 fire that leveled my in-laws' home in Malibu.  We're some 50 miles from the nearest fire, currently burning unchecked in Malibu.  Thus far we've only had periodic whiffs of smoke; however, my brother and some friends in the West San Fernando Valley are uncomfortably close to the action.