In a Vase on Monday: Simpler

I've got a tendency to cram too much into the arrangements I create for "In a Vase on Monday," the weekly meme hosted by Cathy at Rambling in the Garden.  This week I kept things simpler.  Of course, that was partly out of necessity as the volume of blooms available for cutting has diminished.  Still, I know I'm lucky to have something in bloom year-round.  Freezes and snow aren't an issue here.

My first arrangement was inspired by blooms on the snapdragons I planted as plugs in my cool season cutting garden a few weeks ago.  I'd initially thought I'd play up the yellow color in those blooms with the gold flowers of Tagetes lemmonii but my husband dislikes their scent and as he wasn't feeling well to begin with I shelved that idea.  However, I was surprised to find that the pink Camellias growing nearby didn't look half bad paired with the snapdragons.


The bush violets (Barleria obtusa) are still the most abundant blooms in my garden but finding plants to accent them was a challenge, especially as there's a shortage of white flowers in my garden at the moment.  In this case, bringing in a strong foliage accent made the difference.


For more IAVOM creations, visit Cathy at Rambling in the Garden. 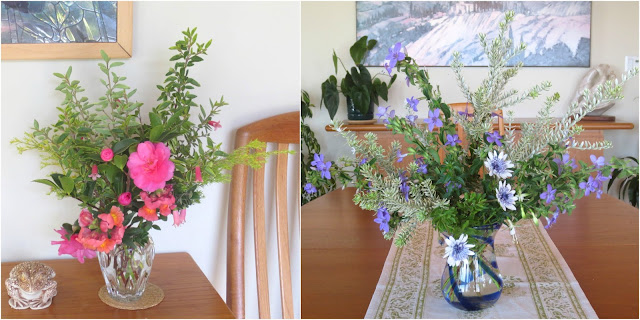 My thanks to all of you who expressed concern about our wildfires last week.  By way of an update (assuming your news providers aren't reporting on the fires nearly non-stop as ours are), the largest fires in Northern and Southern California, the Camp and Woolsey Fires, aren't fully contained yet but the brave firefighters have made substantial progress and the prospect for rain mid-week could aid them further, provided it doesn't come down too hard and cause mudslides in the burn areas.  The air quality here in the south has improved but I understand that the situation in the northern part of the state is terrible.  Hopefully, rain will help there too.  Sadly, it seems that it'll be awhile yet before we know the full extent of the lives lost in the Camp Fire, now given the dubious title of California's most destructive wildfire.