In a Vase on Monday: 'Loverboy' Bows to the Queen(s)

Dahlia 'Loverboy' was set to take center stage "In a Vase on Monday" this week but he was quickly eclipsed by the presence of local royalty.  This included the queen of vines, Clematis, currently in full bloom on the south side of the house.


Rubbing elbows with 'Loverboy' in the cutting garden, 'Queen Red Lime' Zinnia isn't as flashy but she's taller and more stately in appearance under the hot summer sky.


I'd hoped to give Dahlia 'Punkin Spice' a starring role in one of this week's productions but most members of this group wilted as summer reasserted itself over the weekend so that dahlia too took a smaller role than expected.


I've ignored the cool-toned flowers in my garden for the past several weeks.  Both the asters and the lisianthus are looking a little sad now but I thought they deserved attention before they depart for the season so I put them on display this week as well.

For more "In a Vase on Monday" action, visit Cathy at Rambling in the Garden.  For those of you on the US east coast, stay safe! 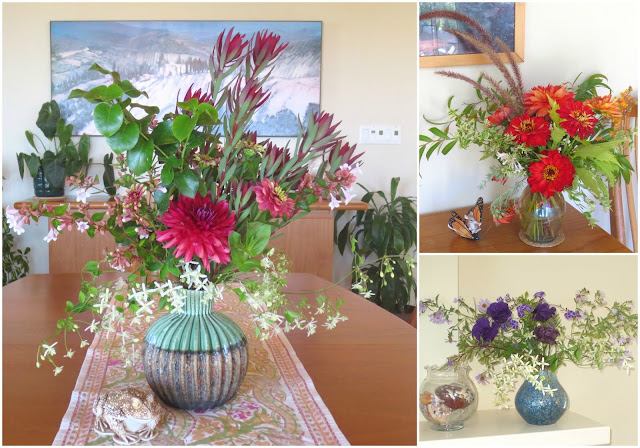