In a Vase on Monday: Keeping things light and bright

The long holiday weekend that unofficially closes the curtain on summer in the US started with emotionally charged public memorials for two American icons, Aretha Franklin, the Queen of Soul, and John McCain, the political maverick known for both straight talk and reaching his hand across the aisle.  I followed Franklin's memorial through radio coverage but watched the televised service for McCain at the National Cathedral.  Franklin's voice was unparalleled but I expect her influence will live on through the many vocal artists she influenced.  I'd like to hope that McCain's integrity, respect for others, and emphasis on civility in political discourse will influence those who seek to represent us in national and international arenas too but, sadly, that seems far less certain.

When it came time to cut flowers and foliage for "In a Vase on Monday," I sought to shake off the tears and keep things light and bright.  As has been the case for weeks now, the focal point of my first vase was a dahlia, in this case 'Strawberry Ice'.


I abandoned the dahlias when I put together my second vase, electing instead to use the last of my green Lisianthus.


For more Monday vases, visit Cathy, our IAVOM host, at Rambling in the Garden. 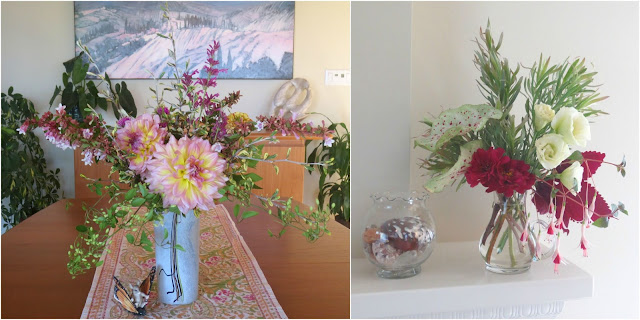 Happy Labor Day to those of you in the US celebrating the holiday!

Posted by Kris Peterson at 7:57 AM