The crows are back in town...

Around the same period last year, I kept finding long branches of our California pepper trees (Schinus molle) Peppermint trees (Agonis flexuosa) dropped all over our property.  At first, I assumed that the gardener had trimmed some of these for unknown reasons and forgotten to clean up after himself.  Then I speculated that the Santa Ana winds had brought them down.  But the volume of debris kept increasing so I soon concluded that neither of those explanations made sense.  Finally, I discovered the culprits sitting atop one of the pepper peppermint trees, tearing out branches before flying off.  Crows!  Assuming that they carried off half of what they left behind, they did a pretty thorough job thinning out the foliage of several of our 7 pepper peppermint trees.

I saw 2 scouting about last week but didn't think too much about it.  Then, this morning, I began coming across tree debris.

Then I heard them - their cries are unmistakable.  I wasn't quick enough with my camera to catch both members of the pair sitting in a tree on my neighbor's property but I caught a photo of one before it flew off to join its mate. 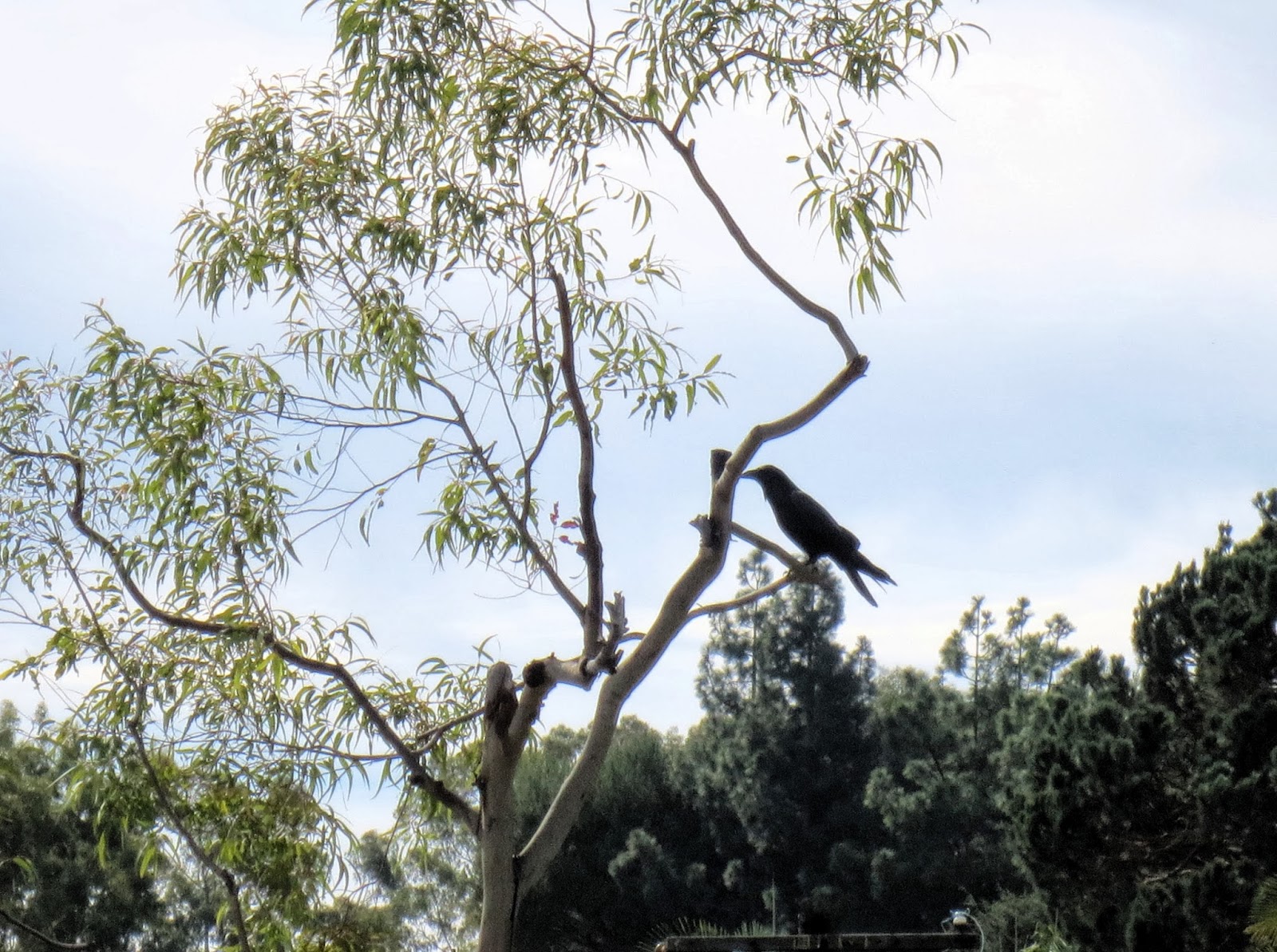 I have no doubt they'll be back as the debris I collected this morning is a small fraction of what I picked up last year.

According to an on-line resource affiliated with Cornell University, breeding pairs take one to 2 weeks to build their nests, which are constructed from scratch each year.  Nests have 3 layers: a base constructed of sticks, a filling made of mud and grass, and a thick bowl of "something soft," which I assume is where the pepper tree branchlets come into play.

This year, so far anyway, they seem to prefer the 2 trees that were trimmed in late January, even though the other 5 trees have a lot more foliage to pick from.  My husband speculated that the open branching of these trees allow them to swoop in, pick what they want and fly off more easily than the trees with denser foliage.  That makes sense to me, especially as I recall that their favorite tree last year was the one with the lightest foliage.

The internet is full of interesting information on crows, deemed by many sources to he highly intelligent creatures.  Click here for an article on 6 "terrifying" ways crows have demonstrated how smart they are.   Among other things, their abilities include facial recognition, conspiracy, planning and trickery.  Hitchcock's film, "The Birds" no longer seems like a fantasy to me.  I think I have to seek peaceful coexistence.  The good news is that the presence of the crows hasn't seemed to bother the smaller birds in my garden - the crows seem to be more interested in nesting material than prey.  While they are predators, according to the Cornell source, their main food sources are grains, earthworms and other invertebrates.

Have you had any interesting experiences with crows in your garden?

Posted by Kris Peterson at 2:38 PM