I tried growing Anigozanthos, better known as Kangaroo Paw, in my former garden and, as I recall, it was a miserable failure that put me off these plants until recently when I added one, purchased on impulse, to the border created this past fall when we removed a large section of lawn on the southeast side of our house.  It did well right from the start.  In fact, it put the annuals next to it to shame.  When I was no longer able to tolerate the annuals' scraggly foliage, I replaced them with 2 more Kangaroo Paw of the same dwarf variety, 'JoeJoe Red.'


I also put 2 Anigozanthos 'JoeJoe Yellow' at the base of one of the raised planters in the vegetable garden.  They seem to be adjusting well there too (although it looks as though I need to put out some snail bait. 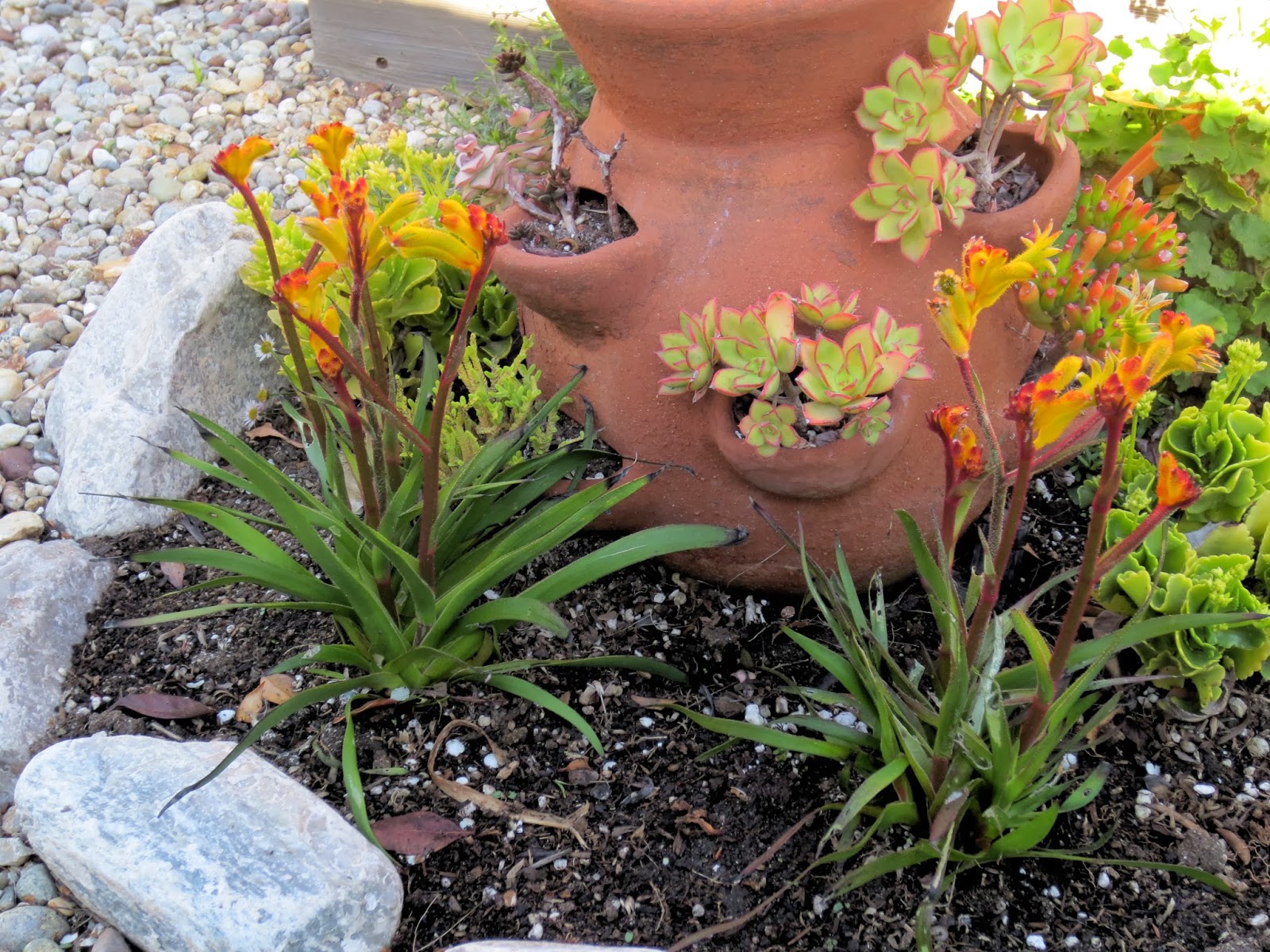 More recently, I've added 3 taller Anigozanthos 'Bush Eternity' below the hedge along the street I pruned back within an inch of its life last month.

The 'JoeJoe' varieties grow just 12-15 inches tall and wide (30.5-38.1cm), while 'Bush Eternity' is said to get 1-3 feet tall (30.5cm-1m).  All do best in full sun with regular water and good drainage, although Kangaroo Paws can tolerate periods of drought.  They hail from southwest Australia and the evergreen foliage grows from rhizomes.  The sap in the root system reportedly supports survival during extreme dry spells.  Some varieties can die back during the heat of summer but recover in the fall.  They're suited to USDA zones 9a-11 (Sunset zones 15-24).  Estimates of cold tolerance range from 20 to 30 degrees Fahrenheit (or -6.7 to -1.1 Celsius).

The sword-like dark green foliage of these plants is attractive in its own right but the plants are generally grown for their unusual flower spikes, which have a fuzzy texture rather like velvet.  According to my references, they should bloom from late spring through fall; however, my oldest plant has bloomed continuously since I acquired it in September.  I cut back the blooms as they fade and the plants pump out more spikes.

They attract hummingbirds and, if I was faster with my camera, I'd have pictures of a hummingbird drinking nectar from 'JoeJoe Red' to share here but I haven't succeeded in capturing that moment yet.  Baiting for snails and slugs is recommended.  In cool, moist climates they can be susceptible to a fungus that causes something known as ink disease but I haven't had a problem of this nature thus far.  I've tried only the red and yellow flowering types but there are also pink and green varieties.  Based on my initial success with the plants in my current garden, I'm tempted to try a pink variety, although no one I know locally has had luck with it.

The Anigozanthos hybrids are my choice as favorite plant this week.  I'm joining Loree of danger garden in here meme celebrating favorite plants in her garden and those of other participating gardeners.  You can find Loree's choice and other contributors' input here.