Erin of The Impatient Gardener hosts a presentation of bouquets composed of blooms and foliage selected from participants' gardens each week.  For the last 2 years, focused on the composition of the garden, I've been loathe to cut anything to carry into the house, although I used to cut flowers periodically to bring to my mother when I visited.  I've decided that it's time to bring some of the garden's color, fragrance and joy into my own the house so I've joined in Erin's Garden Appreciation Society. 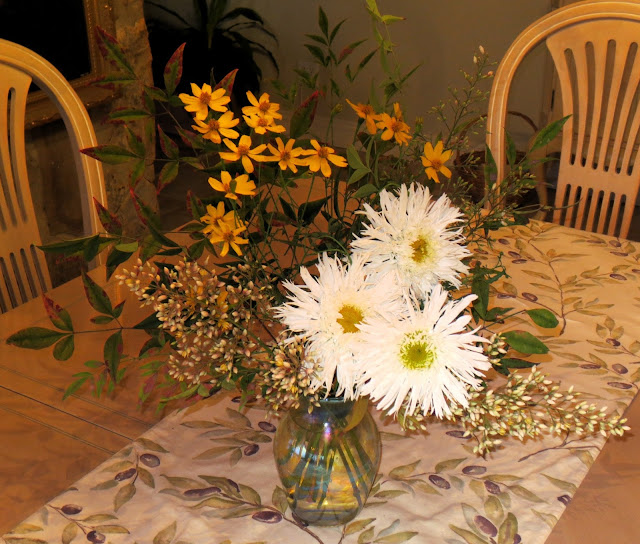 I selected the gold Tagetes lemmonii (aka Copper Canyon Daisy) because I recently noticed that it had sprung into bloom in one of the less visited areas of my garden.  I also like the scent (which, sadly, my husband does not).  I selected the ruffled Leucanthemum x superbum (Shasta Daisy) again this week because I have a lot of them to spare right now and the gold centers mesh well with the color of the smaller gold daisy.

My difficulty arose in selecting an appropriate filler.  I tried a few foliage plants, including:


The problem with the Calliandra haematocephala is that the leaves close up at night, which makes the foliage look droopy in a vase.  The Xylosma congestum, used as a hedge here, is plentiful but, because it's kept closely shorn, it's hard to find pieces that are long enough to have an impact in an arrangement.  And I couldn't bring myself to cut the Persicaria microcephala 'Red Dragon' because its only now coming back from a hard pruning in the fall.

So I selected Nandina domestica (aka Heavenly Bamboo).  In addition to being plentiful here, it's currently flowering, which adds to the presence of the foliage in the vase.  As I recall, the flower buds drop heavily when placed in a vase.  It remains to be seen how long this arrangement will last.  Last week's arrangement held up for an entire week.

Please go to Erin's site to see bouquets posted by other gardeners.

Posted by Kris Peterson at 4:42 PM