Bouquet #3 & the Return of the Raccoons

I almost gave up on the idea of cutting a bouquet today for posting on Erin's site, The Impatient Gardener.  I have company coming to the house this Saturday and I've been on a mad dash to spiff up the garden and get in my last plants before summer starts and the heat dictates that I hold off on further planting until cooler temperatures return in the fall.  However, I was making good progress late this afternoon and I thought I might just have time to cut some flowers when I discovered that the raccoons had paid me another visit.  (I previously posted about my difficulties with raccoons here.)


I planted this Teucrium betonicum last night.  It was one of 3 I put in in my backyard border after pulling a few sun-burned foxgloves.  One plant was still intact, the second (the one shown above) was desiccated beyond resurrection and the third was nowhere to be found.  Maybe I should have known I was pushing my luck last night.  I'd planned to add raccoon repellent to my new plantings after I watered them in but time was short (and I'd forgotten I promised to make dinner).  And, thus far, my experience had been that the raccoons don't dig in wet soil.  Anyway, I took a chance and I paid for it.


After cleaning up after the raccoon, I was disheartened and not really in the mood to cut flowers.  I managed to put a simple bouquet together using some of the same materials I've used in my last 2 bouquets. 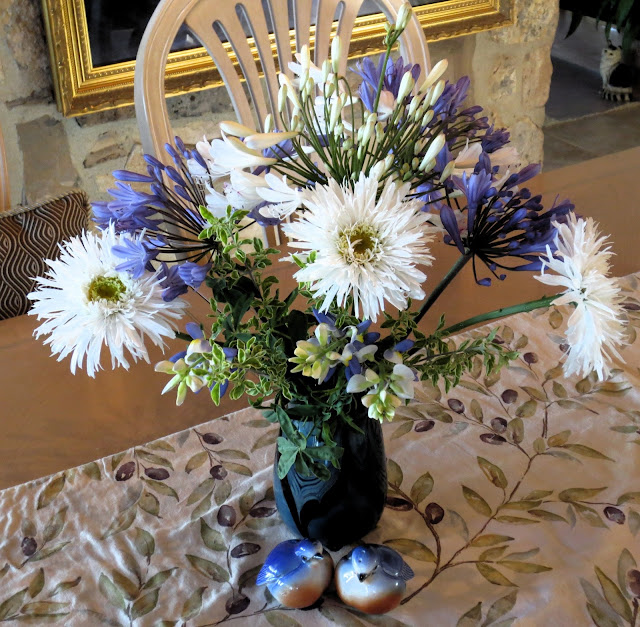 Yes, more Shasta daisies (Leucanthemum x superbum), which I have a lot of right now.  And more Agapanthus, which I also have a lot of.  I added one white Agapanthus to the more familiar blue forms in preparing this bouquet.  Lupine cruickshankii 'Sunrise' was intended to tie the arrangement together but, as the cut blooms are small relative to the other flowers, I don't think they carry the combination.  I added some mint bush (Prostanthera ovalifolia 'Variegata') cuttings as filler but they also blend into the arrangement.  It needs more.  I probably should add some Geranium 'Brookside' and maybe some Salvia 'Mystic Spires' but it's dark now and too late to fumble around in the unlit backyard.  And, who knows - I could come face to face with another rampaging raccoon.  This bouquet will have to do as is.