Bouquet #4: And now for something completely different

This week, I was determined to compose a bouquet that didn't include either Agapanthus or Shasta daisies (Leucanthemum x superbum), which have been the mainstays of my bouquets for the 3 weeks I've participated in the Garden Appreciation Society posts hosted by Erin at The Impatient Gardener.  There are still plenty of both in my garden but, for this round, I thought I'd use flowers I wouldn't normally select in preparing a bouquet.  So here is this week's effort: 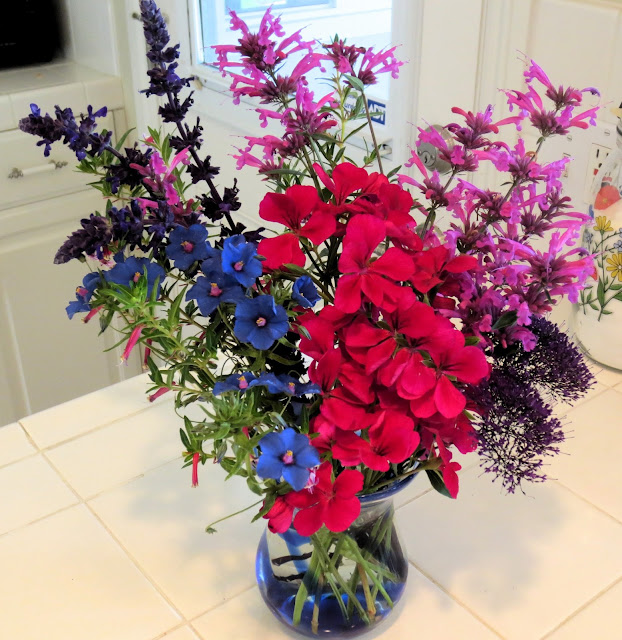 The first flower I selected was Anagallis monelli (aka Blue Pimpernel).  I love its intense blue color and the violet-pink tones at its center.  It looks beautiful en masse in the garden but it makes a very wispy cut flower and, unfortunately, the blooms close at night.


I picked purple, pink and other blue flowers to complement the Anagallis.  The purple flower on the lower right is Trachelium caeruleum 'Hamer Pandora'. (At least I think that's what it is - it could be 'Devotion Purple').  It's supposed to grow 3 feet tall but, in its second year in my garden, it's only about 1 feet high.  For some height, I added Salvia 'Mystic Spires' and Agastache 'Acapulco Rose', neither of which I've used before as cut flowers.  It remains to be seen how they will hold up in a vase.  I added Cuphea ignea 'Starfire Pink' as a filler but that's almost lost in the arrangement's general wispy-ness.  Because I felt the combination still needed punch, I added several stems of Pelargonium peltatum (ivy geranium) front and center.  I have no record of the variety.  The plant moved to this house with me in a pot and has ended up in a sunny spot in the border of my vegetable garden.  Ivy geraniums handle the summer heat here well and, although considered common by many people, they're a sentimental favorite of mine.

Last week's bouquet (shown here) held up well with a little grooming mid-week.  My hope is that the current bouquet will have similar staying power.

Visit Erin's site at The Impatient Gardener for pictures of bouquets prepared by other gardeners.