During the last several days, there has been a steady increase in the stream of visitors to the hummingbird feeder hung just outside our kitchen window.  I generally expect to see a few birds each day but now I'm getting visits on the order of every 5-10 minutes all morning.  There are also more frequent battles at the feeder, with the feeding bird giving chase when an intruder enters his (or her) territory. 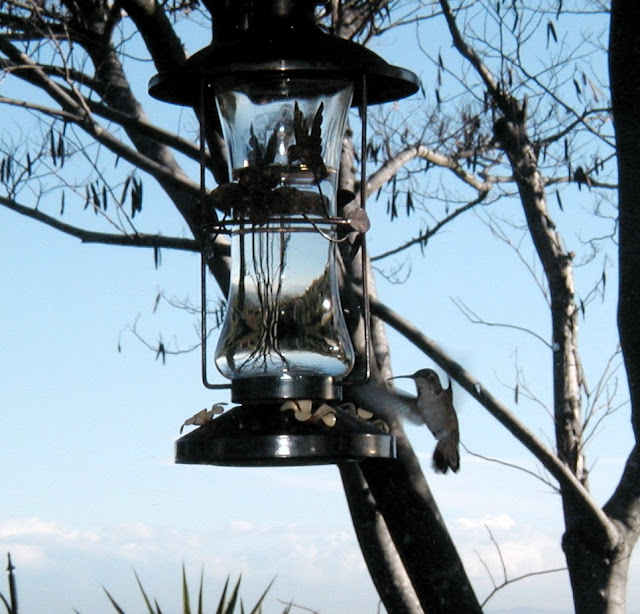 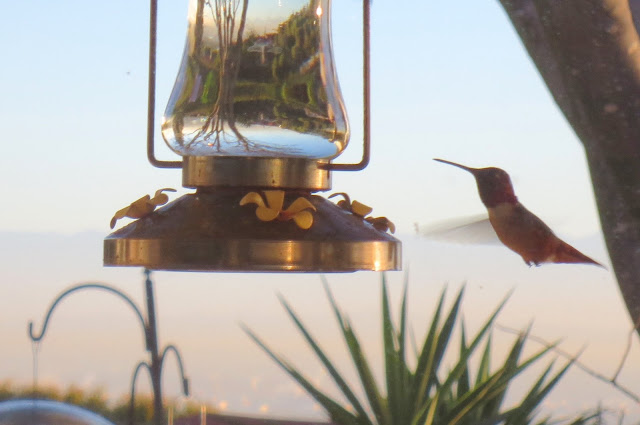 I don't think the increased activity is related to the migration of a non-resident species.  The birds showing up at the feeder appear to be our year-round residents, the Anna's hummingbirds (Calypte anna).  While the seasonal migrations of Rufous hummingbirds (Selasphorus rufous) do lead to all-out hummingbird wars, its too early for them to show up.  And none of the birds at the window have the copper-colored backs characteristic of the Rufous (not that it's easy to get close enough to check their plumage).

So, why is there suddenly such increased use of the feeder?  Maybe the birds have cut back on their foraging because they're hard at work building nests or feeding their young?  I'd like to believe that but I'm just a little concerned that my recent flurry of pruning activity may be a contributing factor.

In my garden, the hummingbirds' absolute favorite food source is Cuphea ignea 'Starfire Pink' in my front garden.  I have 6 of these plants: 3 on each side of the central walkway.  Up until last week they were in full bloom.

Actually, these plants are constantly in bloom.  However, last weekend, I decided that I needed to cut them back in order to facilitate pruning of the roses in the same beds.  I cut the Cuphea down to about one foot tall, leaving no blooms behind.

And the Ribes on the slope, just now coming into bloom, look like perfect hummingbird plants too.

So where's the beef?  The hummingbirds aren't talking - at least, not to me.

To make up for the lousy photographs of hummingbirds shown above, I'm including some much better pictures with the permission of ericnp.net (aka my brother), who is a vastly better photographer than I am.  These pictures were taken about 50 miles northeast of my location.  Bird identifications were provided courtesy of my mother-in-law.

Posted by Kris Peterson at 4:46 PM