Here one day, gone the next

I hope you'll forgive yet another post regarding our Eucalyptus tree.
After a couple of months of deliberations, including discussions with the neighbor who requested the tree's removal, a meeting with an arborist to discuss options, and rain delays, this tree finally came out today.

A crew of 6 arrived just after 8am and immediately got to work.  They were completely unfazed by what, to me, appeared to pose a daunting challenge.  They set up sawhorses and plywood to protect plants in the adjoining bed. 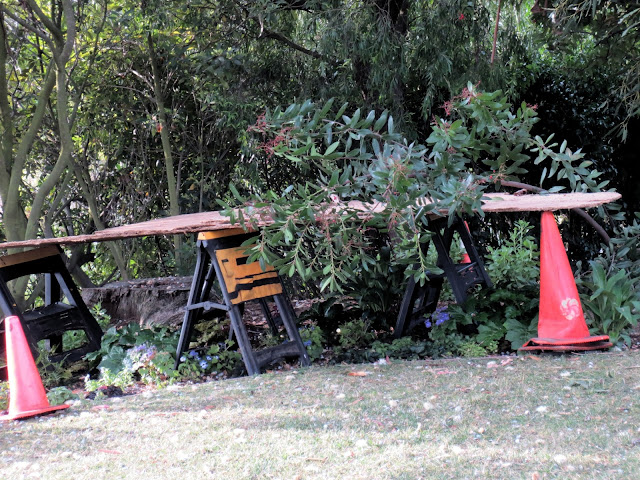 Then a member of the crew scrambled up the tree, began roping branches, and the tree started coming down, one branch at a time.  With the removal of the first of the lower branches, the light streaming through our living room increased.  In less than an hour half the tree branches were gone. 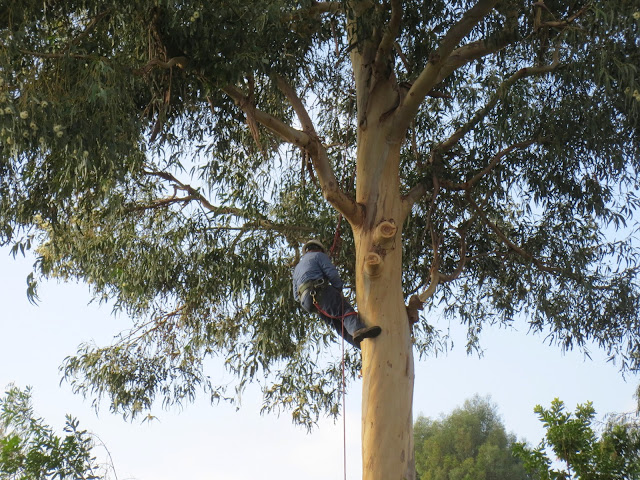 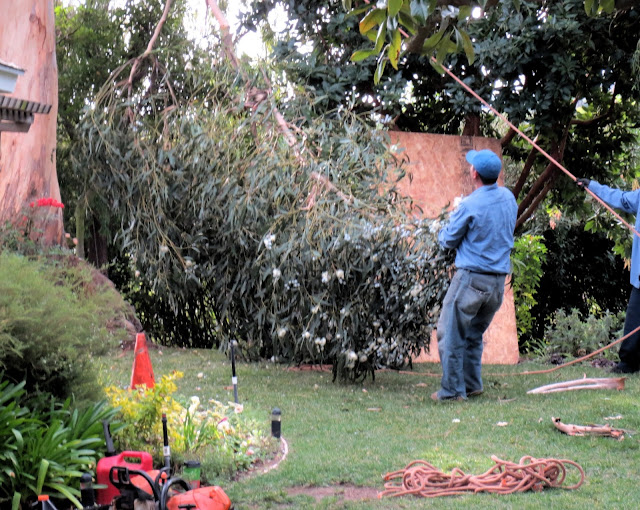 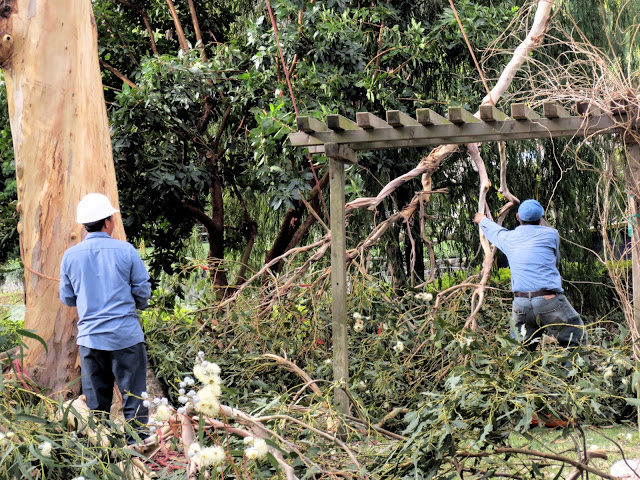 The neighbor who requested the removal showed up at our door.  She was ecstatic.  She told me that this tree was in place when she and her husband moved into their house up the street in 1965.  As the tree grew over the next 47 years, she lost more and more of her view.  She based her appeal for removal of the tree on a local ordinance addressing "view conservation."  Prior owners had thinned the tree and I considered that option but the scales tipped toward removal when the arborist pointed out fungal growths at the base of the tree.  These would ultimately compromise the integrity and stability of the tree, which was already positioned frighteningly close to the house.  The cost of thinning, $500 per year, was also a factor.  The neighbor offered to help with the cost of removal and the deal was struck.

The last branches came down. 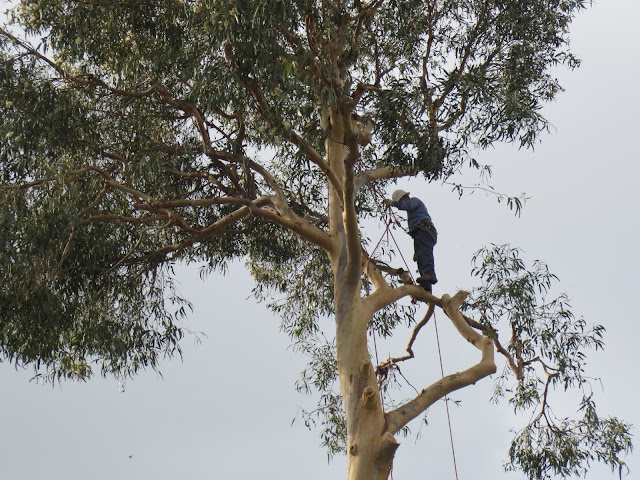 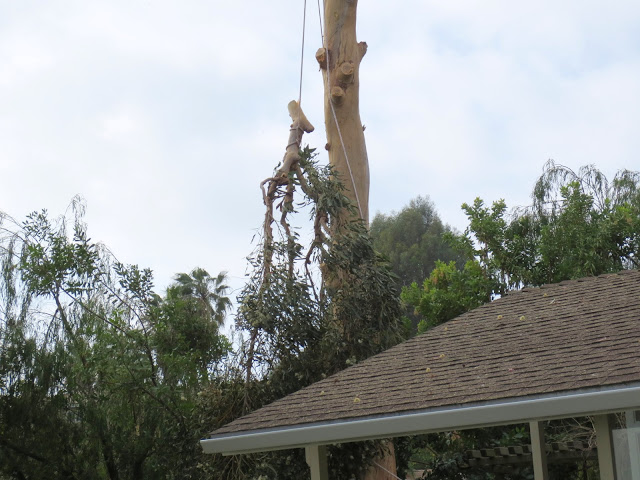 Cleaning up the debris was a major effort in itself. 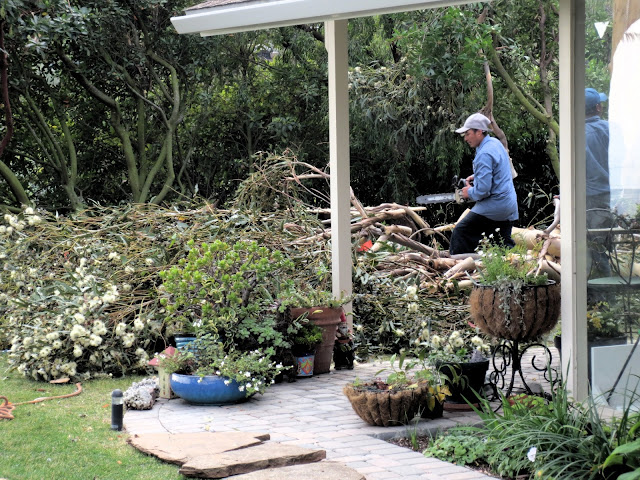 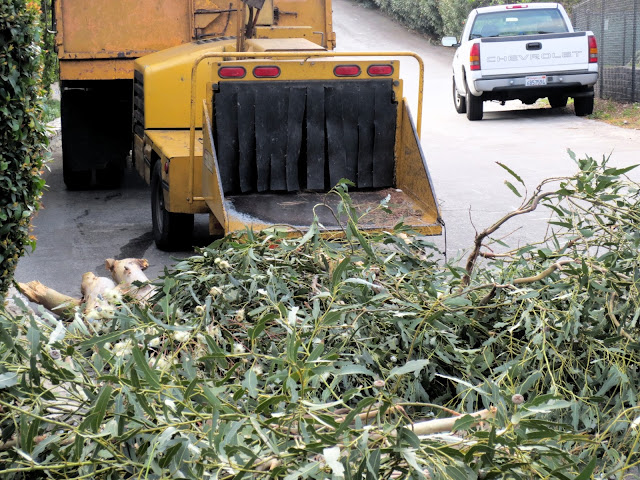 The trunk was cut down one section at a time and then those pieces were cut into smaller pieces until the tree's trunk was gone. 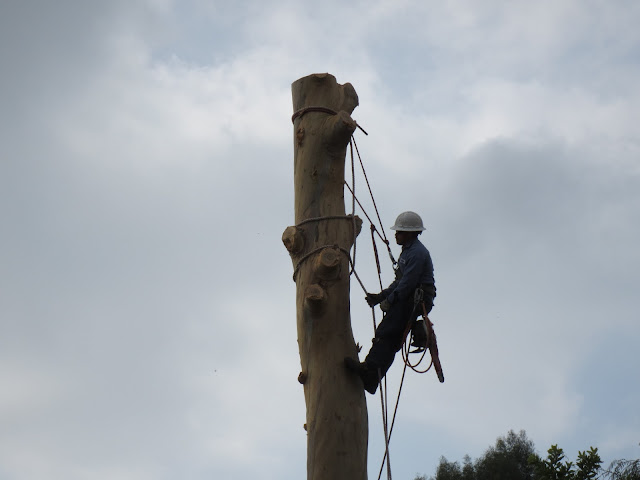 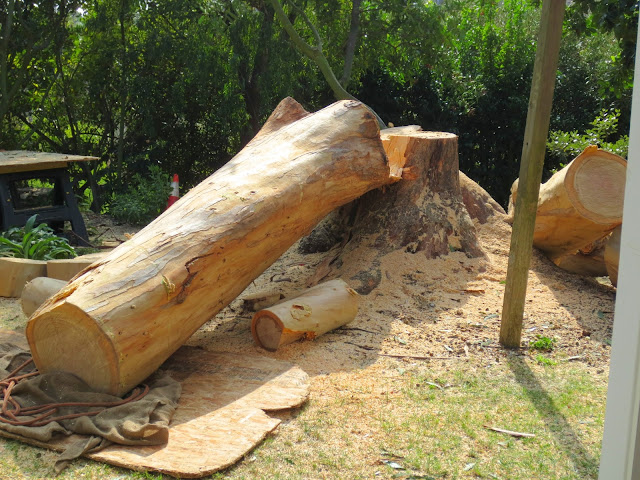 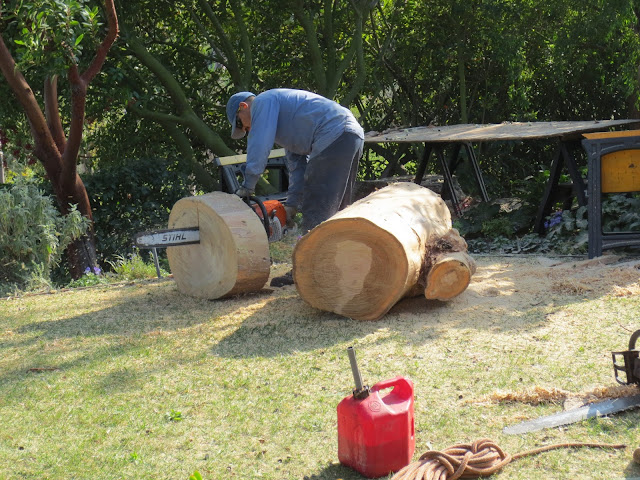 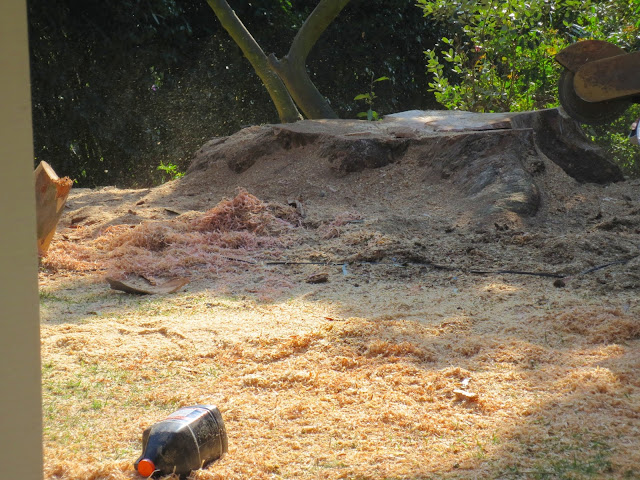 The big pieces were loaded into a truck. 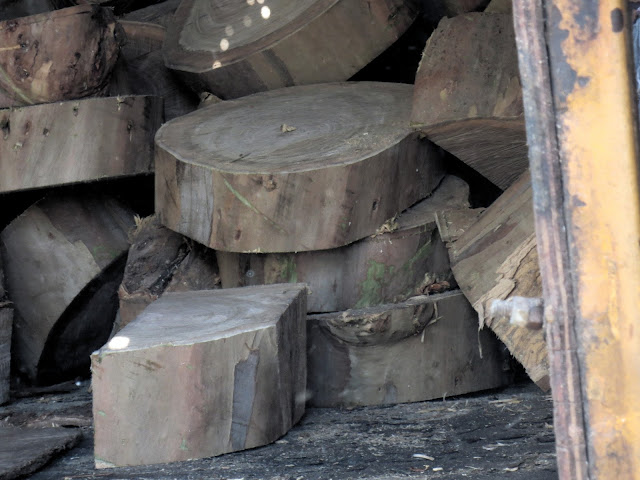 Then the stump was ground down to several inches below grade, which took hours. 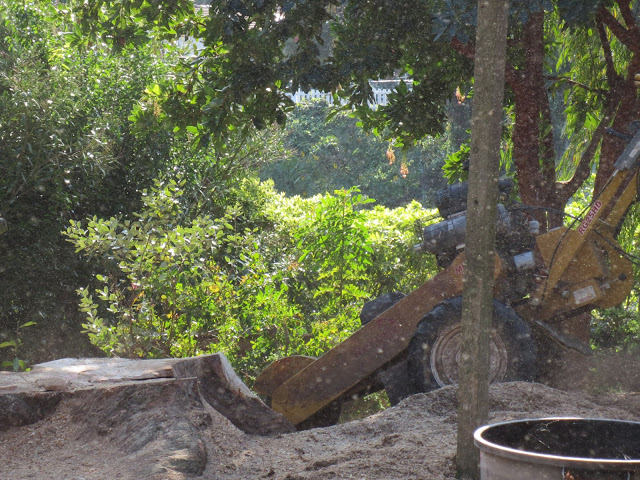 This left masses of Eucalyptus dust, which the crew spread as compost mulch, here there, and everywhere. 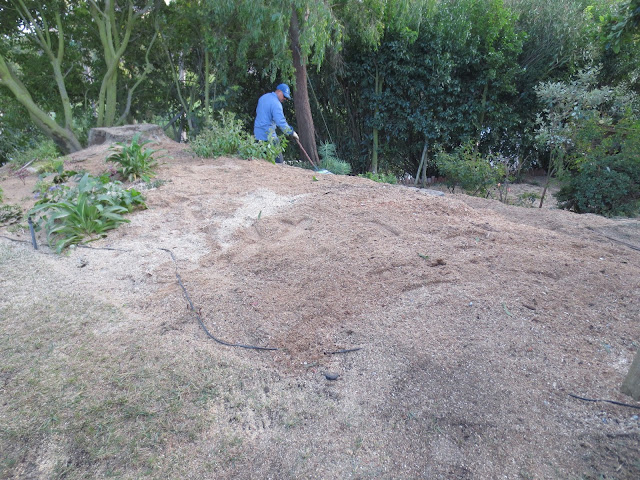 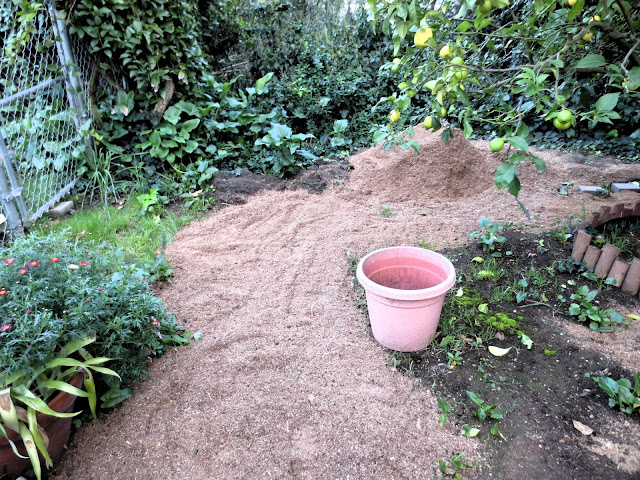 There was remarkably little collateral damage.  A Toyon (Heteromeles arbutifolia), growing at the base of the Eucalyptus, went - there was no way to save it.  However, as best as I could determine in the fading light, there was no other major damage.  Even the Arbutus 'Marina' next to the Eucalyptus appears to have some out unscathed.

It was a partially cloudy day so I haven't yet seen the full impact of removing the 60 foot tree but, even before removal was complete, it was clear that both my side and back yards have becomes sunnier places.  That's probably going to be a boost to my plants in the winter months but it raises some concerns about summer heat.  We have a lot of other trees but none with the height of the Eucalyptus.  The arborist said we can expect the 2 Arbutus 'Marina' on that side of the yard to get bigger now that they're no longer under the shade of the larger tree but, at best, these will grow 25-40 feet tall.  The California Pepper Trees (Schinus molle) planted on that side of the house should also reach 25-40 feet at maturity.

Although the tree removal crew spent a lot of time on clean-up, I expect to spend a good portion of the weekend "sweeping up" anyway.  Maybe that'll assuage my remaining guilt for taking down a tree that was, almost certainly, older than I am.

The view, with the tree gone, is certainly very different. 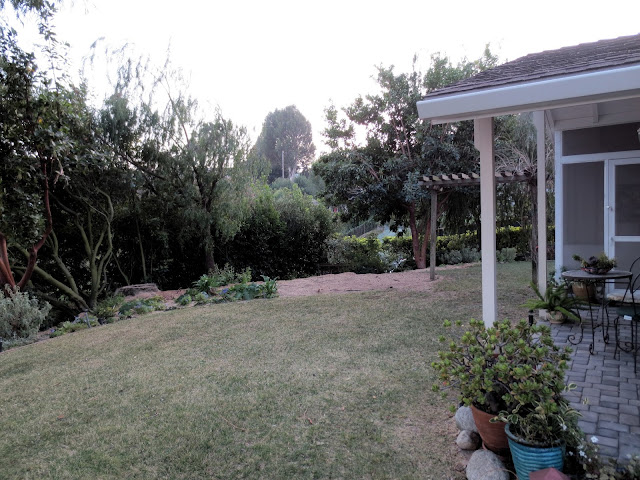 Posted by Kris Peterson at 7:39 PM