Years ago, while on business travel to Seattle, I heard a weather forecaster predict "sunbursts" in the afternoon.  I'd never heard this expression used in the context of a weather forecast and it took me a moment to realize what it meant.  While Los Angelenos may take note of "cloudbursts" - these being fairly unusual for us - people in the Seattle area similarly took note of breaks in their cloudy skies when the sun broke through.  Well, it's rained off and on from Wednesday night through this morning and, during that period, we've had a few sunbursts of our own.  During these sunny breaks, I ventured out a few times to check on my garden.

I was glad to find that the raccoons, for once, hadn't dug up any of my recent plantings.  Apparently, they like soil on the drier side.  The squirrels also seem less active in the rain.   Even though I filled my bird feeders shortly before the rain started, they weren't out performing their usual gymnastics trying to open my purportedly squirrel-proof bird feeders.  However, I did catch one fellow cleaning up the seed the birds had dropped below the feeders with my camera before he skittered away. 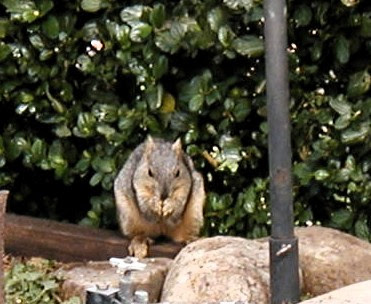 What really caught my attention were 3 plants, none of which I featured in my Bloom Day or Foliage Follow-up posts.   The first was a pot of Amaryllis bulbs I'd planted near the front door in mid-November, finally in full bloom.


I'm still waiting for Cybister Amaryllis 'Emerald' to bloom.  Those bulbs, from the same source as 'La Paz', planted at the same time, in the same kind of pot, and also placed near the front door maybe 5 feet from the other pot, are only half as tall and nowhere near showing signs of pending bloom.

The second plant I took note of is one utterly new to me: Moussonia elegans 'Taylor's Selection', grown by Annie's Annuals & Perennials in NoCal but purchased through Rogers Garden in Orange County.  It's a deeper, more velvety green than reflected in these pictures but what's really noticeable is the color of the stems and developing buds. 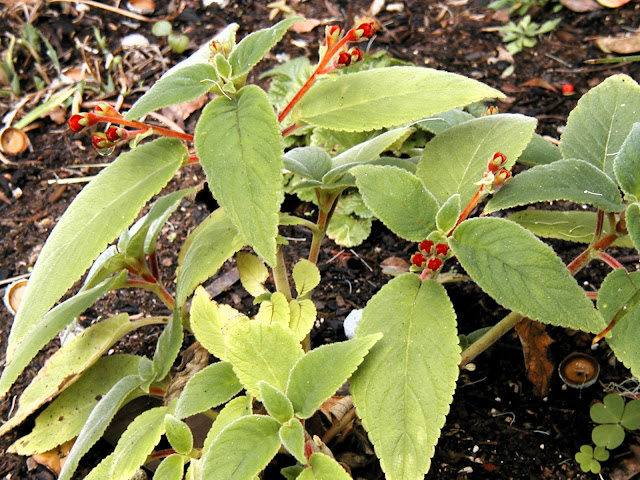 I bought 2 of these plants on impulse (again) in mid-November and put them in a partial sun location in the front yard.  If the plant gets 3-4 x 3 feet as Annie's website predicts, it should be spectacular in bloom at maturity.

The last plant is one I purchased in 2011 at the South Bay Botanic Garden's Fall Plant Sale.  This dwarf Echium has nearly doubled in size since I got it and the repeat bloom it provided last year impressed me so much that I purchased another one at the 2012 plant sale.  They should eventually get 4 x 4 feet.


So, what's attracting your attention in your garden right now?