I've always loved a lush garden with tightly packed plants but my "new" garden is currently showing a lot of bare dirt.  Because my former garden was so small, it was relatively easy to keep it looking full - one trip to the nursery was enough to take care of the empty spots that developed as annual plants died off and herbaceous perennials died back.  However, I can't afford to fill in all the blank spaces in the new garden, at least not all at once.  I've complicated matters by removing lawn in some areas to expand beds, creating larger expanses of bare soil that need to be filled, and by buying plants in the smallest size I can find to keep my costs down and give my new plants the best chance to establish themselves.  This garden also has more herbaceous perennials than I had at our last house - most notably, 40+ orange/red daylilies that go dormant in winter.

Instead of obsessing about what's missing, I'm trying to focus on what looks great right now.  Other than my succulents (most of which look great all of the time), the three plants grabbing attention in my garden right now are: 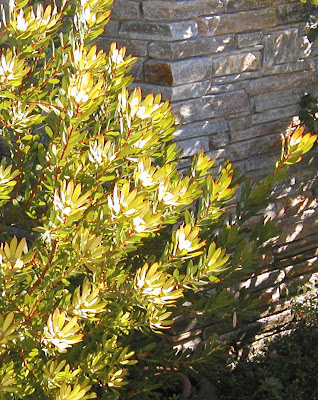 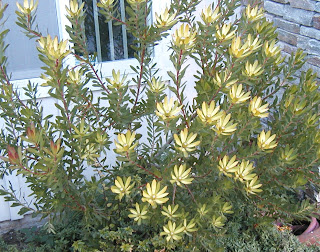 I have no record of the variety - it could be 'Pom Pom.'  (It was subsequently identified as 'Wilson's Wonder.')  It was growing in a pot at my old house for years with an Abelia x grandiflora 'Kaleidoscope' at its base.  Roots of the two plants were so closely intertwined that, when I transplanted them into the ground, I decided to leave them intertwined rather than risk damaging both by pulling them apart.  The Leucadendron has grown much larger since transplantation.  I cut it back once but it's still between 4 and 5 feet tall.  I recently transplanted another, red-toned, pot-bound Leucadendron and have my fingers crossed that it will also come into its own now that its roots have plenty of room to roam. 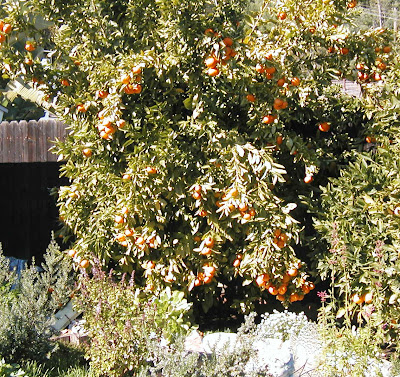 I have no record of the variety here either - the fruit is fairly large so it may be 'Kara.'  The tree was put in by a prior owner.  It looked unhealthy at the time we moved in.  I trimmed back branches that were suffering from insect damage and added compost around the base but otherwise left it alone.  It didn't bear any fruit the first year we were here but last spring it produced a good crop of sweet, seedless fruit and now it's laden with another crop.  The fruit's coloring up well but, based on a taste test this morning, I think it can benefit from a little more ripening time. 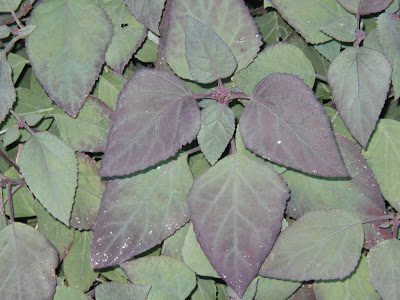 This picture doesn't capture the velvety look of the foliage.  Plant stems and veins are the same purple hue that tinges the leaves.  Even though it's a month or more from producing its ageratum-like blooms, it's still beautiful.  It's done very well with only a couple of hours of morning sun.  I'm planning to add more to other shady areas of the garden.


So, what looks great in your garden right now?

Posted by Kris Peterson at 3:12 PM