Certain hummingbirds are year-round residents in coastal Southern California, most notably the Anna's and Allen's hummingbirds.  They're a constant presence in my garden.  Flowers that appeal to them include those of the Arbutus, Callistemons, Cupheas, and Grevilleas.  They adore the large-flowered ever-blooming Grevilleas 'Peaches & Cream' and 'Superb' and, fierce as they can be, they will wage war for territorial control over those plants.  As I rounded the corner of the house yesterday, I discovered two of the tiny birds locked in battle over the largest Grevillea 'Superb'.

I ducked back into the house to get my camera fitted with its telephoto lens and returned to start shooting.  As common as the birds are here, I have a terrible time getting good photos of them.  Maybe I just don't have the patience to follow their rapid movements.  And then I don't usually have a telephoto lens in hand either.  These are the best photos I managed to take.  I believe all are the same bird, as he managed to keep his competitor at bay. 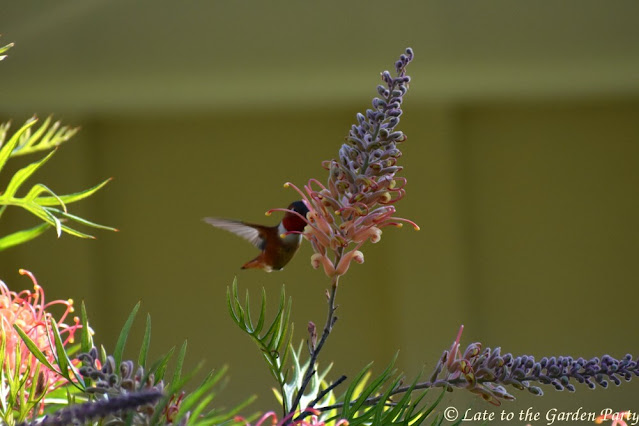 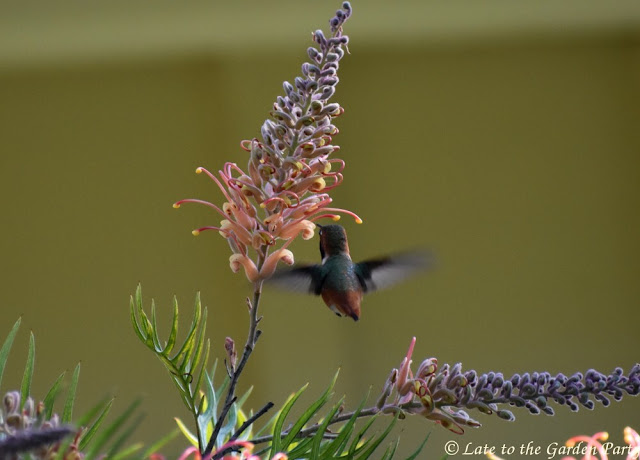 I tried to get more photos a little later after checking the quality of those I first shot but the hummer didn't cooperate.  I could hear him chirping away but, as stealthily as I tried to move, I failed to get any more photos.  It's all a matter of timing - and luck.