In a Vase on Monday: Nothing new

I got my Christmas wish: it rained off and on from Thursday through Saturday night.  Out total rain for the current "water year" (which started October 1st and runs through September 30th, 2022) now stands at 3.91 inches.  With more rain expected later today and also Wednesday through Thursday, it looks fairly certain that the total as the calendar year comes to a close will already exceed the paltry 4.12 inches we received over the entire course of the last water year.  I'm happy, although as I've read that December may be Southern California's wettest month (instead of February which is normally the case), it's way too early to count our chickens.  At least there's been some improvement in Northern California's drought status.

The downside of the rain is that a lot of the blooms in my garden were looking bedraggled when I walked through it on Sunday morning.  With a few exceptions, there was little in the way of new blooms to cut.

Instead of Aloe blooms, I cut stems of one of my small-flowered Grevilleas and took my inspiration from those, resulting in a color mix that resembles the arrangement I created prior to Thanksgiving.

For more IAVOM creations, check in with Cathy at Rambling in the Garden. 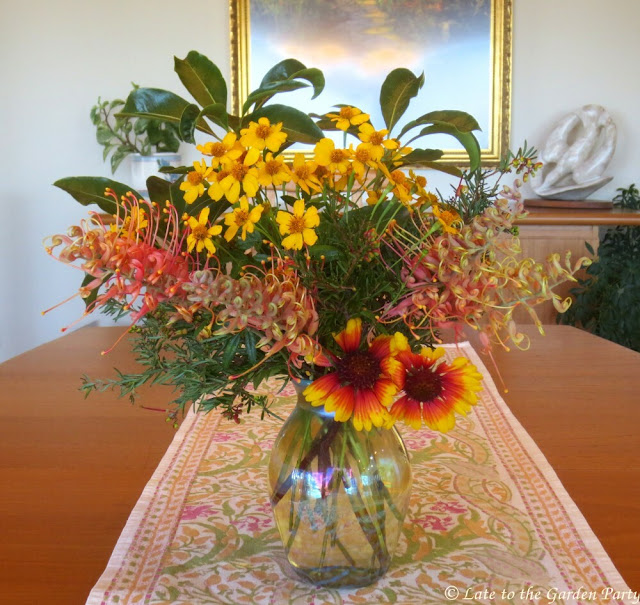