I was having breakfast Monday morning when I noticed there was a flurry of bird activity going on just outside.  Visitors have increased since I filled the feeders a couple of weeks ago but this level suggested a population explosion.  As the birds fly off as soon as I open the door, I caught the action as best I could from inside the house.  I couldn't capture live action shots to reflect the traffic patterns but the activity was focused on the feeders and, to a lesser extent, the fountain.  However, like well-behaved kids in line at the cafeteria,  the birds waited out openings at the front of the line from nearby waystations.

I quickly determined that the population explosion I mentioned was due to a large influx of white-crowned sparrows, winter visitors here.  While the finches chose to await their opportunities at the feeder sitting on the bare branches of the Ginkgo tree, the sparrows chose the cover of the nearby Arbutus 'Marina', the tree-sized Leucadendron 'Pisa', and the thicket of foliage beneath the latter. 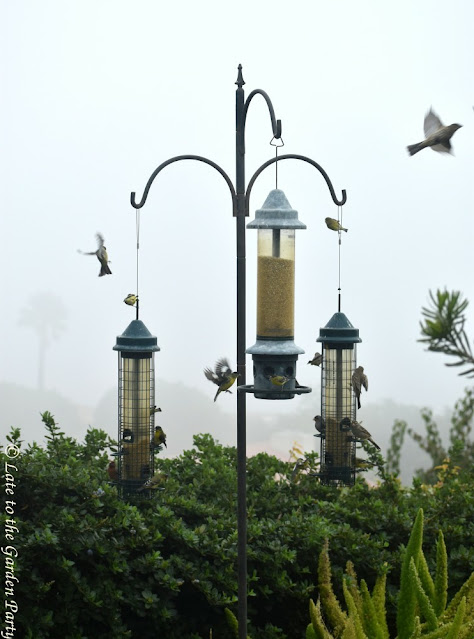 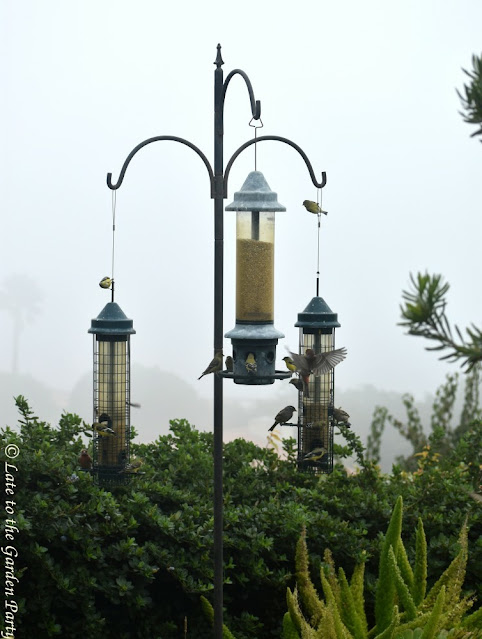 Activity at the fountain was more subdued.

Of course, there are always bullies who push others out of the way seeking to get their piece of the pie first.  That morning, the biggest bullies were the scrub jays.  I didn't catch a photo of them at either the feeder or the fountain, although they scattered the smaller birds to visit both.

And then there are the opportunists.  The squirrel was ever-present on the ground below the feeder, gobbling up the seed scattered by the birds.  But another character insinuated himself yesterday afternoon.

When he realized I wasn't going to leave him to his business, he headed out.  The flock of sparrows seems to have scattered too, or the fact that the birds managed to empty two of the three feeders has simply made the back garden feeding station less attractive.