Tree Pruning: Before & After

Our annual tree pruning exercise was scheduled for the day after Thanksgiving this year, starting at 8am.  The company's president and arborist always arrives about a half hour earlier to review what's to be done with his crew's lead and to get any final input from me.  As a result I was up very early and was able to watch the sunrise. 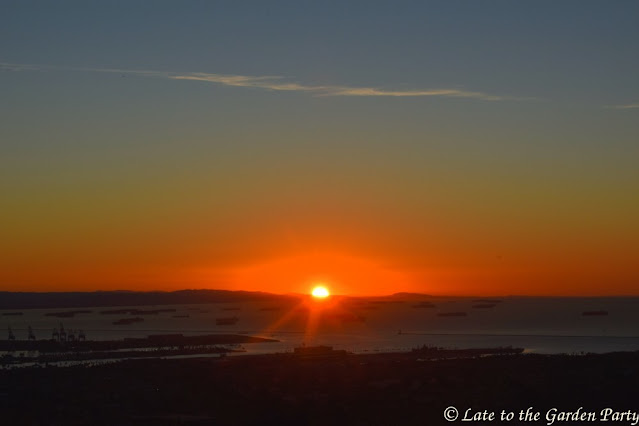 I always freak out a bit before my trees are trimmed.  In addition to the almost inevitable collateral damage to surrounding plants, I worry about cutting back the trees too much, leaving them looking awkward for months or longer.  Given our increasingly hot summers, I'm also wary of diminishing the shade the trees provide so I emphasized that I wanted all but three trees on this year's list "lightly" trimmed.

The three trees that received the most extreme haircuts were all peppermint willows (Agonis flexuosa).  We have six of these trees and I usually have one or two of them trimmed each year but I'd ignored the two facing the street and the largest one, located in the southeast corner of our back garden, for a few years.  My husband and I'd attempted some minor pruning of one of the street-facing trees several months ago, resulting in him tumbling from the ladder on uneven ground as I tried to break his fall.  Neither of us broke any bones but we did get a scare and some nasty bruises so we'll be leaving that job to professionals in the future.

In addition to the three peppermint willows, four strawberry trees (Arbutus 'Marina') were trimmed.  I have these trees trimmed every year to ensure air flow within their canopies, preventing the sooty mold that can otherwise develop.  Their before and after photos look a lot alike but that's because most of the trimming is done to the interior areas.


Three other trees and one cherry laurel hedge (Prunus caroliniana, not photographed) also got trimmed.

The best news is that there was less collateral damage than usual this year and the crew was in and out in just over five hours.  Job done until next year, when I may add some of our citrus trees to the mix - pruning them myself has gotten harder as those trees have gotten taller.