In a Vase on Monday: My timing was a little off

My dahlias are gradually making progress, displaying more buds and a few more blooms, but it's a toss-up as to whether the blooms will beat out the progression of mildewed foliage, which is already developing in small amounts.  After a nice stretch of cooler than normal temperatures last week, the heat returned for the Labor Day holiday weekend.  We still haven't passed the 100F mark but we did reach 97F (36C) yesterday afternoon and, after three hot, dry days, the dahlias I'd  targeted for for this week's arrangements were no longer looking their best.  I tossed two blooms of Dahlia 'Cafe au Lait Royal' in the compost heap but I couldn't bring myself to toss out the blooms of Dahlia 'Gitt's Crazy' I'd been eyeing since the middle of last week.

In contrast, the flowers of Dahlia 'Enchantress' opened just as the weekend started and were still in fine shape early Sunday morning when I hurried through my selection process trying to stay ahead of the heat.

Like the dahlias, the gladiolas have been disappointing this summer.  I don't recall any issues with them last year, other than that the majority bloomed all at once.  This summer, the gladiolas are opening one at a time, often with a break of more than a week in between blooms, with the flowers fading within a day.  I've already tossed out several because they looked too sorry to include in an arrangement.
For more IAVOM posts, visit Cathy at Rambling in the Garden. 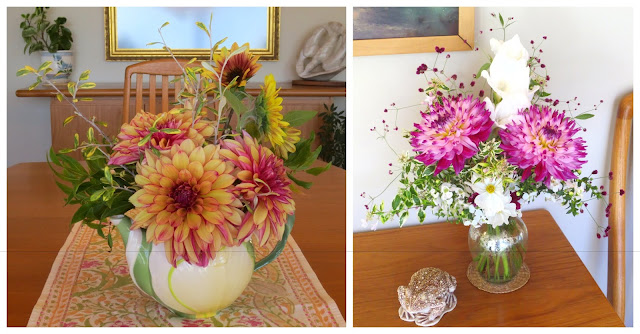