There's only so much space

It's still too hot to get any major projects done in the garden and too early to go ahead with replanting areas that need an overhaul.  However, I've taken advantage of some cooler days here and there to start small-scale cleanups in a few areas.  In the process, I've pulled up a lot of agave pups.  I hate to throw them away so I've been potting them up and storing them behind the garage and next to my compost bins.

With the noID agave pups I pulled out of the dry garden on the northeast side of the house late last month, the Agave 'Jaws' pups shown above, and another handful of Agave 'Medio-picta Alba' pups I pulled out of my south side garden earlier this week, I'd accumulated more than I wanted to store.  Time for another plant giveaway! 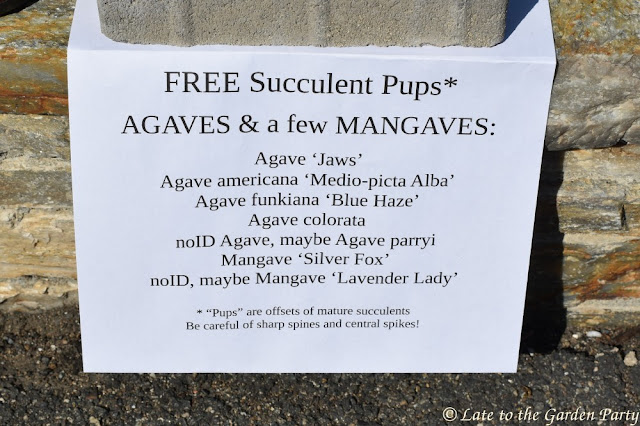 While reducing some of my surplus plant stock, I somehow managed to pick up other plants courtesy of a few friends at the same time.  Funny how that happens.  Here are the plants currently awaiting placement somewhere in my garden.

Of the twenty-four plants I put out late yesterday afternoon, only nine of the smaller ones were still left when I checked this morning but, with the marine layer still firmly in place, there's a good chance more of them will find homes with neighbors who walk the area when the temperatures are still comfortable.  I'll leave them until late this afternoon to see if more disappear.  Twenty-four small plants out in exchange for four larger ones in isn't bad, though!

Posted by Kris Peterson at 9:35 AM