In a Vase on Monday: Summer sulk

We've reached that point in the year when the garden enters its sulky phase - or maybe it's not the garden so much as the gardener.  Early summer blooms like the Agapanthus and Shasta daisies are just about done while my dahlias and zinnias are taking their time again this year.  There are still flowers to be cut but not much to inspire my inner florist.  I'd been eyeing the flower stalk of a Hippeastrum, one of several bulbs I planted in the ground last fall in the hope they might naturalize in my garden, but it wasn't quite ready for take-off.  So I focused on the ever-dependable Grevillea 'Superb', which blooms year-round.

On my spin through my garden, I noticed a smattering of blooms on Grevillea sericea, which I haven't used much, if at all, in the past year so I let it guide me in assembling flowers for a second arrangement.

Last week's Amaryllis belladonna and a couple Lisianthus were still in good shape so I popped them into a small vase with foliage I'd cut for the first arrangement and elected not to use.

We've been lucky thus far in the sense that it hasn't been really hot here, although it's been unusually humid.  Monsoon rains and flash floods have plagued areas to the east of us but all we've received in terms of rain was 2/100ths of an inch almost two weeks ago.  There's a chance of rain this morning but I'm not counting on it.  It would be nice, though.

For more IAVOM posts, visit  Cathy at Rambling in the Garden. 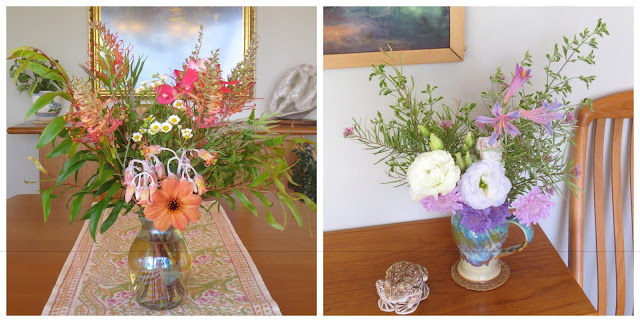