In a Vase on Monday: I've got lilies!

The truth is, I don't know much about lilies, except that they have a reputation for being short-lived in Southern California.  Last year, in a fit of pandemic-related frustration with my limited planting options, I ordered two varieties of what were called "tree lily" bulbs from a catalog I was flipping through.  Although I was careful planting them, I had very low expectations so I was frankly surprised when I saw three plants pop up in the back garden and another three in the front garden this spring.  I was even more surprised when they developed buds.  The buds slowly grew larger and larger but, as temperatures rose, I began to fear that an ill-timed heatwave would take them out before they bloomed.  However, all five buds of the 'Pretty Woman' variety bloomed this past week.  (I'm still waiting for blooms from 'Purple Prince'.)  As we're currently in a heatwave, I went ahead and cut one stem of two blooms for "In a Vase on Monday," the meme hosted by Cathy of Rambling in the Garden.

Flower arranging was interrupted by my cat Pipig, as she announced her entrance to the house from her enclosed catio with an unearthly yowl.  I dropped what I was doing to intercept her, knowing that there were two possibilities: either she was in acute distress of some kind or she was bringing me a "present."  It was quickly evident it was the latter.  When she reached the dining room rug, she sat down, opened her jaws and released a lizard.  The lizard was very much alive and skittered away so quickly I had only a general idea of its direction.  Pipig herself lost track of it and, disgusted (or perhaps just confused), she soon turned tail and walked back through the cat-flap to her catio.  My husband and I conducted a search, moving some furniture and checking underneath appliances with a flashlight, but we couldn't find it.  I returned to flower arranging, hoping that the lizard would reappear on its own.
As my purple foxgloves were developing crispy brown edges, I created a second arrangement including them and other flowers in related colors.

Fortunately, a few hours later, I sighted the lizard sitting in a floor-level windowsill staring out at the garden.  My husband and I managed to corral him using two small plastic storage containers and a piece of cardboard and I escorted him outside.  The house is once again lizard-free!
For more IAVOM creations, be sure to check in with Cathy at Rambling in the Garden. 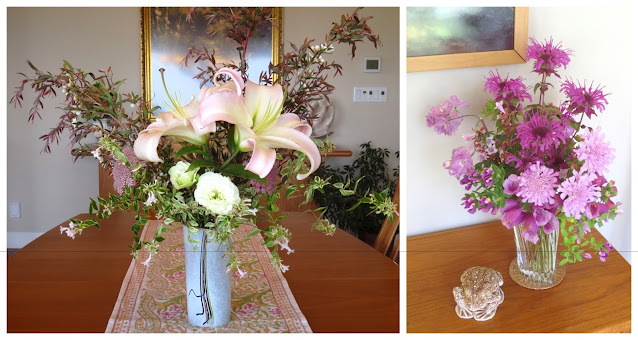