It's Halloween but I'm not in a proper mood to celebrate.  Added to that, my pumpkin monster, created more than 2 weeks ago, developed a bad case of mold and had to be tossed in the compost bin a couple of days ago, when my husband declared that it wasn't even a suitable gift for the squirrels.

Instead, the sight of a trespasser sneaking through a fence, captured on camera, set the theme for this week's Wednesday Vignette.

Another form of trespass was detected in the backyard garden.

However, the most disconcerting intrusion in my garden of late was this one.

Can you make it out?  Here's a closer view. 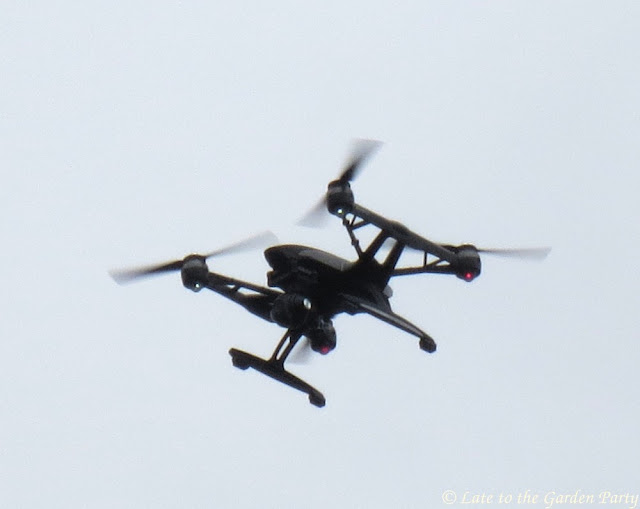 I'm trusting that last intrusion was an isolated event and probably utterly innocent.  The drone's operator, a visitor next door, may have been intent on capturing photos of his children.  In any case, it was shut down shortly after I charged outside and began stalking it with my own camera.  Ugh!  While I might enjoy employing a drone to photograph my own garden from above, I think any user needs to be hyper-sensitive to other people's privacy concerns and diligently avoid unsanctioned incursions.

Preventing a drone from flying over our property is difficult but last weekend I took some low-tech steps in the hope of preventing the local critters from ravaging the raised planters in my newly planted cutting garden.


I hope your only intruders are trick-or-treaters.  Happy Halloween!  For more Wednesday Vignettes, visit Anna at Flutter & Hum.

Posted by Kris Peterson at 8:40 AM