In a Vase on Monday: Blast Furnace Survivors

Heat was predicted for the weekend but the forecasts for my immediate area called for temperatures in the low 90sF, which wasn't too ominous.  I gave the areas I thought were at greatest risk extra water and applied some additional mulch on Thursday, thinking that would be sufficient until our irrigation system ran in the wee hours of Saturday morning.  I was wrong.  When we awoke to soaring temperatures on Friday morning, I ran around watering more plants while my husband shuttered the house against the heat.  The air conditioning went on before 10am.  Still, when I left the house to meet friends, I'd no idea just how bad things were going to get.  By the time I got back home mid-afternoon, our temperature had hit 110F (43C) and the humidity was in the single digits.  Strong winds that persisted well into the night made things worse.  At 8:30pm when I went back outside to do more spot watering, it was still 102F and when I went to bed around 11pm the temperature was stuck at 101F (38C).

The temperatures dropped into the low 90sF on Saturday, and Sunday was about the same, but the damage was done.  Flowers shriveled and some plants had outright died.  Even plants in my lath (shade) house were impacted.  Perhaps the biggest shock was the damage done to my Acacia cognata 'Cousin Itt', plants that have survived prior heatwaves without any sign of difficulty.

Every time I walked outside, I found further evidence of damage.  I wasn't sure what I would find to cut for a vase and I seriously considered posting a photo of the lemons I picked Friday evening.

However, while my supply of flowers has been vastly depleted, I was able to find some that made it through the blast furnace undamaged when I surveyed the garden Sunday morning.


Most of my Agapathus look awful and I've already cut down a few dozen flower stalks just because I couldn't stand seeing at them in that state but I found a few in good condition in a relatively shaded area and cut those for a second vase.


I'd foolishly hoped that, after a very dry winter, Mother Nature might favor us with a mild summer.  May and June were unusually cool on average and that gave me an artificial sense of security.  I'm disappointed to say the least and more than a little shocked that our temperature here hit 110F.  I can't recall a temperature that high in the seven and a half years we've lived here.  However, while I the garden sustained some losses, I expect that most of the damaged plants should survive - I just have to face several months of ugliness until they rebound.  Still, I know we're lucky that we haven't been affected by wildfires as many areas in California and the Southwest have.  The only one happy about the weather at the moment are the lizards. 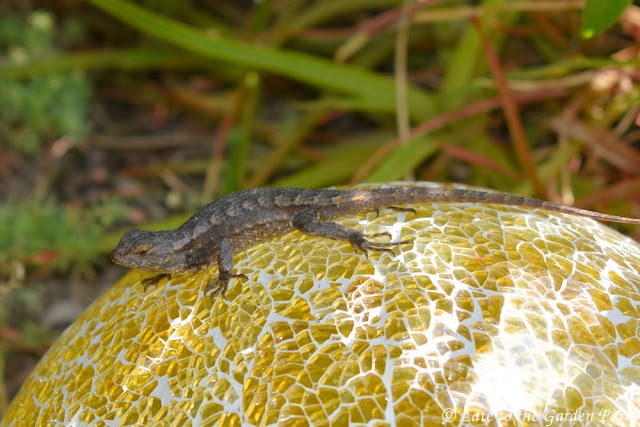 For more "In a Vase on Monday," visit our host, Cathy at Rambling in the Garden.