In a Vase on Monday: Cool Blues for a Hot Day

We expect to be beset by another heatwave beginning today and continuing through the workweek.  The forecasters say it won't be as nasty as the heatwave of July 6th that sent our temperature here up to 110F (43C) but then they didn't anticipate an event like that in early July either.  I've been giving the most vulnerable areas of the garden extra water in advance of this new heatwave in the hope of stemming further damage.  Whether it'll be enough remains to be seen.

I was tempted to cut just about every bloom I had but I restrained myself - I'd like to have some left to cut in future weeks, especially as my dahlias and zinnias have been slow to get a move on.  I found a few new Agapanthus blooms in the shadier areas of my garden on Sunday morning and cut those on the assumption that I'll get more enjoyment out of the pristine blooms in my dining room than I'd get from seeing withered stalks in the garden.


As my Gaillardia are blooming profusely, I cut some of them to create a simple arrangement for the front entry.


For more Monday vases, visit Cathy at Rambling in the Garden.  I'm off to do more hand-watering before the heat soars. 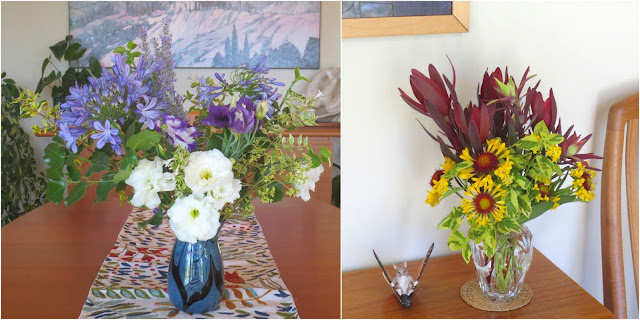