In a Vase on Monday: Better than I'd anticipated

The Agapanthus are making their annual appearance throughout my garden.  Unlike prior years when they've arrived like a stampede of cattle, they're moseying in a few at a time.  However, as I have more clumps of the plants than I can count, that's still a lot of flowers.  The question this week wasn't would I use them in an arrangement for "In a Vase on Monday" but rather how I'd use them.  Although I like the flowers, I've seldom been pleased by how they look in a vase.  As the variegated Echium 'Star of Madeira' is also blooming at last, I decided to see how those two plants would look together.  Frankly, I wasn't too impressed by the combination once the cut stems were in my bucket but adding a few other plants seemed to improve the overall effect.

I managed to take out a small slice of one finger while cutting back the weed-like growth of Erigeron karvinskianus in the course of assembling flowers for this weeks' vases.  This put a damper on my flower arranging exercise but my husband bandaged up my finger and I persevered to create a second vase, using flowers I'd had my eye on since last week.


Those of you who've included peonies in recent arrangements know I suffer from a severe case of peony envy.  I have 2 peony plants but the Itoh peony hasn't bloomed since the year I purchased it (in 2013!) and the Majorcan variety, which generally produces at least a single bloom, has produced none this year.  So, when my hairdresser told me the market down the street from her shop had peonies, I treated myself to some.  It's an IAVOM cheat but here's my third vase:

For more Monday vases, visit our host, Cathy at Rambling in the Garden. 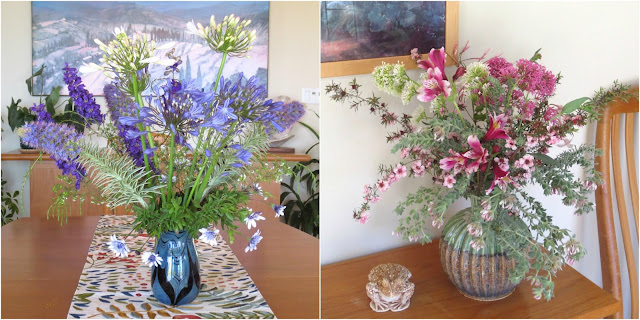 And best wishes to all of you in the US for a happy Memorial Day holiday!